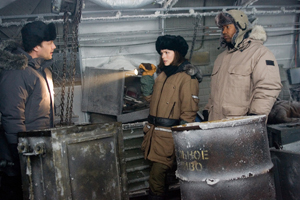 Here’s a really cool idea for a film: you’re a U.S. Marshal working at a United States research facility in Antarctica, helping keep the peace. Like a campus cop, your primary job is dealing with drunks and minor thefts, but you’re hoping that a major crime will occur so you can remember what it is like to be a “real” cop.

Now, because you’re in the coldest, most remote place on Earth, you’ve got another level of complexity too: the extraordinarily hostile climate where winter temperatures of 167 degrees below zero and 100 mph winds are common and where the snow can blow so intensely that you can’t see your hand in front of your face “whiteout” conditions.

Add one more ingredient to this film stew: what if the first major winter storm was barreling towards your research station and you had to evacuate right now or you would be stuck for six months of cold, cruel winter and you just found a murder victim?

That should have been the setup for the new Dominic Sena-directed film Whiteout, but unfortunately, it isn’t. The film does take place in Antarctica, at the Amundsen-Scott base, and the protagonist is a U.S. Marshal, Carrie Stetko (played unconvincingly by Kate Beckinsale), but the High Noon-style tension of the impending storm and the isolation of those trying frantically to solve the murder before they’re left in the station for the winter is never properly exploited and the film itself ends up surprisingly lifeless and un-engaging.

There are a lot of great films predicated on how protagonists deal with a difficult, frightening situation when they’re isolated, ranging from the aforementioned High Noon to Alien, The Abyss to Event Horizon, or even The Shining. It’s a splendid setup for a film, and what all of these films have in common is that the place itself becomes an antagonist and that it’s up to the ingenuity and courage of the protagonist or group to find a solution and survive.

Whiteout is actually based on a graphic novel series by artist Greg Rucka and has received rave reviews for its strong heroine and the extreme weather. Marshal Stetko is so poorly realized in the film, however, that rather than be a strong character, she’s weak and unbelievable as a tough cop who has accepted the Antarctica station assignment out of some incoherent guilt about having lost her partner during a drug bust in Miami.

It’s immediately obvious that this is the case in Whiteout when the second scene in the film has Beckinsale undressing and stepping into a steamy shower stall. While she’s running water over her face, someone knocks on the door and steps into her room. Why she’s having a shower is irrelevant to the film but it does establish that she’s gorgeous, which works against her characterization. There’s no subsequent nudity or even another suggestive scene in the rest of the film. One can only presume that she agreed to one partial nudity scene in her contract and the studio just wanted to get it out of the way. Still, what the heck?

The mystery of the film begins when one of the base pilots, Delfy (Columbus Short) reports that he may have found a body on the ice many miles away. He, Stetko and Doc Fury (Tom Skerritt) fly out and sure enough, find a partially mutilated body on the ice without any protective clothing or hiking gear. Most puzzling. Turns out the body is that of Anton Weiss (Marc James Beauchamp), who was one of a group of men hunting for meteors out of an abandoned Russian research facility called Vostok Station.

Turns out that their search unearthed a 50-year-old Russian cargo plane crash site and the mystery really starts from there: what was on the plane? How did Weiss die? Shortly thereafter, United Nations security specialist Robert Pryce (Gabriel Macht) appears on the scene and acts quite suspiciously, insisting that he accompany them on their investigations.

I don’t normally say much about poor actors, but I have to admit that Macht was painfully, excruciatingly bad to watch on screen. You, dear reader, could have undoubtedly done a better job with the role of U.N. investigator than he did, and it became increasingly hard to accept Pryce’s role in the film as it unspooled. Beckinsale wasn’t a great marshal, but Macht was atrocious. I can only hope he’s better in his other roles.

That was in many ways the core problem of Whiteout: it was a film comprised of missed opportunities. The movie could have built great tension with a “storm arriving in: 2 hours” countdown timer, a la High Noon, coupled with the many suspicious characters working on the research station and Stetko wrestling with her inner demons while trying to conduct a murder investigation in a hostile environment. But it didn’t.

Whiteout is ripe for a remake with a grittier feel, tougher actors and a director who has mastered the art of creating suspense in a movie. This version, with Beckinsale, Skerritt and Macht? Pass.