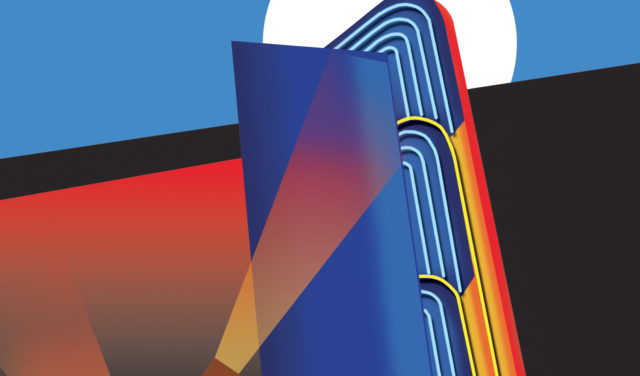 Good news, Longmont: The movies have returned to Main Street.

“They didn’t have the money,” Lamb explains, referring to the Longmont Theatre Company (LTC), which purchased the building — then known as Trojan Theater, a shuttered movie house — in 1991. “[Klein] worked with them to make it happen.”

That involved dropping the price of the building as an in-kind donation with the stipulation that the venue be called the Longmont Performing Arts Center and that it showed movies along with live performances.

“28 years later,” Lamb says with a laugh, “we finally got the movie screen in.”

The screen — 12.2 feet high by 19.6 feet wide — not only completes LTC’s promise to Klein, it welcomes moving pictures back to Main Street, poetically back in the spot where they’ve always belonged.

Erected in 1939 with an era-appropriate Art Deco façade, the original venue was called the Fox Theater and was like most movie theaters of the time — providing 24/7 programming of films, animated shorts, newsreels, live entertainment and vaudeville. Back then, theaters were more than just entertainment and information; they were a place someone could stay if they didn’t have anywhere to go. A decade later, the proliferation of televisions and the establishment of the interstate system pulled people away from city centers to the suburbs. Some of the theaters adapted and survived; many, like the Fox Theater in 1950, closed their doors.

Then, in 1960, Klein purchased the building, renovated the interior and re-christened it the Trojan Theater — named after the Longmont High School mascot. For the next 25 years, the Trojan Theater did well as a first-run movie house, but as businesses left Main Street — and moviegoers flocked to multiplexes elsewhere — so too did the Trojan’s patrons.

In July 1986, the Trojan Theater closed once more, sitting vacant for five years until LTC came along, bought the facility from Klein and upgraded the theater.

“They took out seats to make the thrusts out on the stage,” Lamb says.

“And to bring the stage out,” adds Tracy Cravens, who handles marketing for both LTC and the New Trojan Movie House. “Usually, the stage in a movie theater is only 6 feet, so they brought it all the way out.”

“We also took out the balconies,” Lamb continues. “So there’s been a lot of changes inside; the historical part is the outside.”

Sitting 285 people comfortably, the Richard Klein Auditorium is a warm and welcoming space, perfect for both stage shows and movies.

“We like to say it reaches out and hugs you,” Lamb says. “It’s a happy place.”

“When the lights go off, and you’re sitting there ready for either a movie or a performance, you can just feel it come alive,” Cravens adds.

But it didn’t happen overnight. As Lamb lightly jokes, it took 28 years to bring Klein’s wishes to fruition, and it wouldn’t have happened without the Longmont community and a bit of good luck.

As Lamb explains, the “dream where live stage productions and movies are playing side-by-side,” started officially in 2015 with the “Raise the Screen” campaign. Then, in July 2016, the movie house showed Dear Eleanor — a comedic road movie set during the Cuban missile crisis and filmed mostly in Colorado — for two nights on a rented screen. Both nights sold out.

“It really snowballed after that,” Cravens says.

“Not only for movies,” Lamb interjects, “but for the stage production theater. It was like, ‘Oh, this is a really cool place. Let’s go there.’”

A little bit of attention was all they needed.

“I don’t want to be woo-wooey, but it was kind of like it was meant to be,” Lamb says. “We really went on faith. And it happened.”

Since then, the New Trojan Movie House has sporadically screened a bevy of classics, from Dracula for Halloween to Miracle on 34th Street and It’s a Wonderful Life for Christmas. For Valentine’s Day, the movie house showed An Affair to Remember. To celebrate Easter, it was The Greatest Story Ever Told. And back in March, the movie house celebrated the year the Fox Theater opened with a slate of Hollywood movies from 1939.

“We kind of found our market,” Cravens says of the movies that are connecting with the community. “We found what doesn’t work and what does work.”

Going forward, the frequency of movie screenings will be somewhat sporadic but mostly on weekends.

“At least once a month,” Lamb says. “It will probably start slower that way because we’re still getting [LTC, who hasn’t had to share the space] used to this.”

Selecting the movies is an advisory committee of five — Lamb says she’s open to more if anyone would like to join — and the next series runs Memorial Day weekend, a slate of four John Hughes films: Weird Science, Pretty in Pink, The Breakfast Club and Ferris Bueller’s Day Off.

Future series include everything from retrospectives on Marlene Dietrich and Anthony Hopkins to Spaghetti Westerns, Three Stooges comedies, the films of Alfred Hitchcock and on and on. Lamb is also open to working with local film festivals and filmmakers to exhibit their movies.

The New Trojan Movie House is just getting started. Following this weekend’s John Hughes series, the movie house will screen Shaun the Sheep Movie on June 1 before going dark over the summer — LTC’s youth programming and Taste of Shakespeare takes over the auditorium. But, when the New Trojan Movie House returns in August, it does so with that oh-so-familiar space opera from a long time ago, in a galaxy far, far away.

“It’s working,” Lamb says with a smile. “Things are just falling into place.”