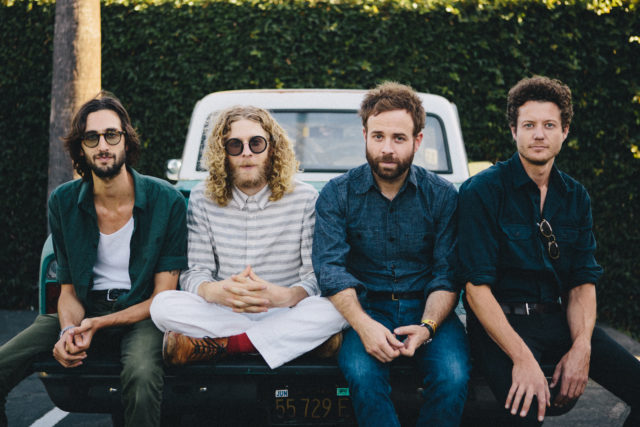 The band is just settling into their hotel in Lake Tahoe when Dawes’ drummer, Griffin Goldsmith, calls to chat. It’s par for the course; in nearly a decade, the hard-working guys who rejuvenated the Laurel Canyon folk-rock sound haven’t slowed down, continuing to tour relentlessly, dropping a new album every 18 months or so and making videos to support progressively popular singles.

From a musician’s point of view, there’s no question Dawes has “made it.” They recorded their first album, 2009’s North Hills, in a series of casual jam sessions with folks like Conor Oberst of Bright Eyes, Benmont Tench of the Heartbreakers (as in Tom Petty and), and Chris Robinson of Black Crowes fame. At the band’s arrival on the national scene, they toured with legendary songwriters John Fogerty and Jackson Browne. Things went atmospheric when Dawes circled the country with Bob Dylan back in the summer of 2013.

Their ascent seems effortless, which is perhaps the best mark of any job well done: Never let ’em see you sweat.

Yet hobnobbing with the godfathers and torchbearers of contemporary folk rock didn’t change how Dawes operates. This is a self-made band, musicians that know exactly what it takes to keep buttering their bread. And it does, in fact, take a lot of sweat.

“I think that unlike acts like Bruno Mars — or whatever, there so many examples — that can go out and play 10 shows a year if they want and sell enough records to make a living, and not play any shows if they don’t want to, we make the majority of our money touring and it’s how we enable ourselves to continue to make music,” Goldsmith says. “We have to tour, and that’s a positive thing for us because that’s where the songs live, that’s where they breathe, and we’re better musicians because of it, and we have years of touring to thank for the place we are currently at.”

If it sounds like a constant hustle, it doesn’t feel that way to the band. Performance is where Dawes excels, where fans find new depth for their love of the band’s brand of gentle acoustics and warm vocal harmonies.

This fact has never been lost on the members of Dawes.

“We’ve been tying to make a live record, essentially,” Goldsmith explains. “For our first three records, people would come up after the show and be like, ‘I love your records, but I didn’t realize I loved you guys so much until I saw you live.’ It was kind of disheartening. It was a compliment, and taken as such at the time, but then again we, as musicians, wanted that to translate; we want people to get that same feeling when they listen to our record.

“I think finally with the fourth record we accomplished that live-sounding, show-quality recording.”

Their fifth long-play, We’re All Gonna Die, juxtaposes its macabre-sounding title against a vibrant tracklist that downplays the band’s vintage folk sound in favor of something that is decidedly on the pop-soul spectrum. On many tracks, raw, fuzzy guitars and minimalistic drumming provide a canvas on which the bass and keyboards paint the picture; the album has an energetic hum even in its quietest moments. The title track is as smooth and harmonic as an Al Green ballad (reminiscent, particularly, of “How Can You Mend a Broken Heart?”), while the single, “When the Tequila Runs Out,” hits listeners with a crunch characteristic of the Raconteurs.

Dawes sought the help of old friend and highly sought producer Blake Mills to add new depth to their music. Despite the buzz about the band’s divergence in sound, it’s impossible to say Dawes has taken a new direction; as Griffin Goldsmith says, the band’s career is still “propped up” by the narrative and emotional songwriting of his older brother, Taylor Goldsmith.

The younger Goldsmith attributes the band’s flexibility of sound and direction in part to their decision to self-release records since 2013. Now the band’s management company, Q Prime, provides the infrastructure for Dawes’ personal record label, HUB Records.

“At the end of the day, they left us in the kitchen and we’re the musicians, and we really respect the options of our managers,” Goldsmith says. “We have a deep relationship now with them, and we know how to take those opinions and assimilate them. There’s just a deeper understanding; everything is more transparent being on HUB.”

So while Dawes may have made it by any measure in the music industry — touring with legends, trusting themselves enough to self-release records, landing on the Billboard charts — they value their status as a hard-working band, because, at least in part, it keeps the pressure at bay.

“I never really had fear [about the new album], like, ‘Oh, I hope people like this,’” Goldsmith says. “I think that’s partly because we’ve never been a huge band, so it’s not like we have these crazy expectations like, say, Hosier does, that comes out of the gate with a huge single and suddenly people are looking to them to put out something like that again.

“I’ve never felt external pressure to deliver something. And I’m glad. I don’t want anything like that.”