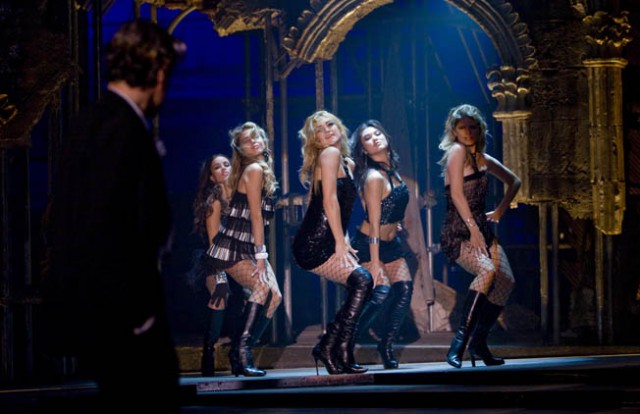 Films are dreams, whether the director is aiming for hyper-realism or whether we’re allowed to fly through the odd, the dreamy, and the troubling of their imagination. Director Rob Marshall’s Nine is a sexy, engaging, stylish and enlightening journey through the imaginative life of Guido Contini (Daniel Day-Lewis) and his many loves.

At the beginning of the film, Guido, a famous Italian film director clearly modeled after Federico Fellini, explains why he doesn’t want to talk about his upcoming movie project: “You kill your film, mostly by talking about it. A film is a dream.”

The very first frames of Nine open with Guido sitting on the vacant set of his upcoming movie Italia, then seamlessly shifts into a dance number that introduces us to his major loves, his mother (Sophia Loren), his wife Luisa (Marion Cotillard), his lover Carla (Penélope Cruz), the blonde star of his new film Claudia (Nicole Kidman) and his muse Lilli (Judi Dench).

Set in Italy in the mid 1960s, Guido is struggling with his next film project. It’s 10 days before shooting begins at Cine Cettá and he has no script, not even a real idea of the storyline, because he spends so much of his time in his head, in fantasy sequences within which women fawn over “Maestro Contini” and do steamy, sexy burlesque dance numbers in the skimpiest of costumes.

Guido is an escapist and we see many scenes where he withdraws from the world around him and focuses on a poignant or intimate memory or whirls away in an astonishing fantasy sequence of perfect women who are perfectly willing. His films offer the same escape for his audience, but as is emphasized throughout Nine, his most recent films no longer hit the mark. Is he too wrapped up in his own world to even be able to share it anymore, maestro or not?

The tension between how he envisions life proceeding and the different ways that things actually unfold is the leitmotif of Nine, even as we in the audience can clearly see how everyone around Guido bends and forgives so that the maestro has the creative space he so desperately needs to create his next masterpiece. “You’re just an appetite,” Louisa finally tells him, “no one can help you find your way.”

The film also operates as an homage to classic Italian cinema. From the outfits to the beautiful exteriors, the colors, the lyrical patter of dialog and in particular the wonderful music from composer Andrea Guerra, all help create a film that feels like, just maybe, it was made forty years ago.

Nine has extended black and white sequences and many of the fantasy dance numbers flip between black and white and a rich Technicolor. There’s a nod to the vérité style of classic Italian films too, with heads in the way of long shots, people walking past the camera during exteriors, and other touches of reality.

Nine is a film within a film, a story both of the challenge of creating art, of the dilemma of the artist finding inspiration in their imagination while having to live in reality. It’s also a film about making a film, about the art of filmmaking, not the business. With its superb music, sexy dance numbers and thoughtful storyline, it’s one of the best films of 2009 and we’ll hear it mentioned for at least one or two Academy Awards when they’re announced.