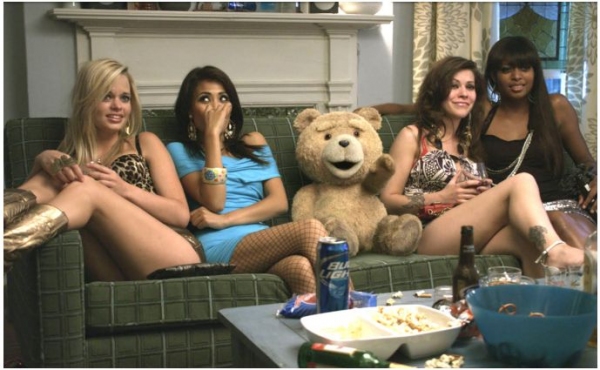 Ted is a film about a foul-mouthed teddy bear and a 30-something Bostonian with a hot girlfriend and the maturity of, well, a 35-yearold guy who lives with a stuffed animal. I found Ted to be quite hilarious, even as it was easily one of the crudest and most crass films I’ve seen in the theater so far this year.

Then again, I’m already a fan of director (and Ted voice) Seth MacFarlane, creator of the equally crass but entertaining animated series Family Guy. Like that show, Ted is rife with pop culture references. If you’re not up on the latest celebrities, entertainment gossip and snarky buzz, a few things will doubtless fly right over your head.

The story starts deceptively idyllic, with young John Bennett (played as a boy by Brett Manley, then as a man by the always likable Mark Wahlberg), a social outcast, on his street. No friends, no siblings, so when his parents buy him a big stuffed bear for Christmas, his most fervent wish is that it come to life and be his best friend forever. And, of course, it does. Think Pinocchio meets The Hangover.

The morning after Ted animates, John runs into the kitchen and tells his parents “He’s come alive! He’s come alive!” and they think he’s just a cute little kid who had a nice dream. Then Ted walks in and starts talking. The parents leap on the counter and scream “Kill it! Kill it!” but Ted talks them down, and after a few minutes of explaining what a miracle he is, the mom says, “Oh … just like baby Jesus!” Ted becomes a famous celebrity, including an impressive CG scene where he’s a guest on Johnny Carson’s show, but then suffers the fate that many novelty celebrities experience: being yesterday’s news. Still, Ted and John stick together, a couple of ne’er-do-well dropouts. Think Harold and Kumar but with a teddy bear. And hookers.

Meanwhile, John’s been going out with the gorgeous and extraordinarily forgiving Lori (Mila Kunis), who is the perfect girlfriend. She even tolerates him sharing his Boston apartment with a has-been celebrity teddy bear, who is now an unemployed stoner. She works at a fancy PR firm and has to constantly fend off advances from her creepy overachieving boss Rex ( Joel McHale). But John? He’s going nowhere in his job at a car rental company. She finally gives him the expected ultimatum: It’s me or Ted.

Like an episode of Family Guy, there were a few cringe-worthy scenes and a few jokes that missed their mark, but if you enjoy irreverent, off-color humor; wry, snarky, sarcastic jokes; and sight gags at which you’re embarrassed to laugh, then you’ll enjoy this film.