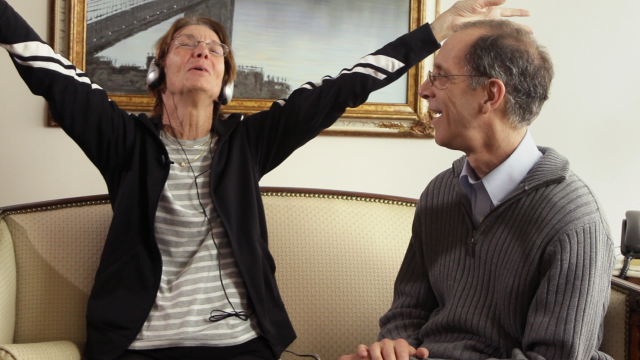 Last night I pulled out a favorite album of mine that I had not listened to in some time, Doolittle by Pixies. Within seconds, I was transported to another time, another place. A smile crept across my face, my feet began to tap and a series of memories flooded forth.

How does this happen? Where do these memories, so vivid they seem tangible, come from? How is it that a pop song can bring forth something that no other work of art can?

“Music connects people with who they have been, who they are and their lives,” explains Dan Cohen, the subject of the documentary Alive Inside, which is playing at The Boedecker Theatre Oct. 8–11. Cohen, founder of the not-for-profit Music & Memory, works tirelessly to help patients with dementia access their memory through the power of music. It is a long, uphill battle that Cohen faces, but the results keep him optimistic.

Armed with a simple iPod, Cohen visits patients with varying degrees of dementia, Alzheimer’s and, in one case, schizophrenia to see if music will stir something in them. It does. The music starts, and these comatose patients spring to life. Most sing, many dance and some are so overcome with emotion they burst into tears. It’s one of the most joyous things you will ever see.

It sounds too good to be true, but people like Henry — whose viral video is what spurred on this documentary — undergo an unbelievable transformation. Prior to the music, Henry couldn’t recognize his own daughter, but with “Goin’ Up Yonder” playing, Henry can answer questions with clarity.

Cohen and first-time documentarian Michael Rossato-Bennett travel to various nursing homes, repeating this experiment over and over again, positing that music may be the most effective tool to combat dementia. Alive Inside doesn’t spend much of its lean running time (78 minutes) on the science of this musical cure, choosing to show rather than tell, but here is the short and skinny: It works because it stimulates the patients, forcing them to interact, and that interaction sharpens the mind. The proof is in the pudding every time Cohen presses play.

Yet, Alive Inside is not really about Cohen and his musical cure. Alive Inside is a not-so-subtle attack on how Americans turn a blind eye to aging and sickness. According to Alive Inside, 5 million Americans have been diagnosed with dementia, and prescription medication and nursing home care reigns supreme.

We make way for tomorrow by shuffling grandma and grandpa off, loading them up with pills and condemning them to spend the rest of their days receding into their own minds. It’s an undignified way to end one’s life.

Alive Inside compares that life to the one Nell Hardie lives with her husband, Norman. The Hardies have been using music at home, and with success, to ward off dementia for 10 years now. The Hardies combat the disease not with medication, but with music and with devotion. It’s working, but it takes time, care and a whole lot of love.

Cohen’s cure isn’t just music — although music does make everything better — it’s attention. What could be more effective than basic human interaction? Not much. As I watched one patient, Connie, weeping and happily hugging Cohen, a line from Kurt Vonnegut ran through my mind: “There’s only one rule that I know of, babies — God damn it, you’ve got to be kind!”