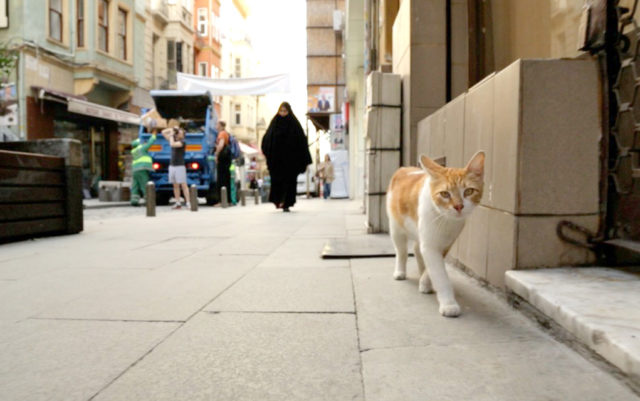 Cats have been woefully maligned by cinema. Sometimes they are villains — like the conniving Si and Am from Lady and the Tramp — or a symbol for women on the prowl — such as Cat from Breakfast at Tiffany’s — or a symbol of a sad and lonely woman — the “cat lady” pejorative. Cats have been set up as easy targets for those who have never had the privilege of time with a feline. For those people, Kedi is here to set the record straight.

Kedi, Turkish for cat, is an unusual and life-affirming documentary from director Ceyda Torun about the cats that roam the city of Istanbul, Turkey. These cats — neither wild nor tame — have no permanent owners, preferring to call all of Istanbul their own. And with hundreds of thousands of them in the city, they are as much a part of Istanbul as any structure or any square.

Torun’s camera observes these cats, completely engrossed by their habits, their personalities. Sometimes the cats can just barely be seen, blending into the environment just so, other times they lounge on the sidewalk in plain view. In some instances, Torun’s camera races along the ground giving the viewer a cat’s eye view of Istanbul and its residents.

If there is a resident of Istanbul who does not have time for these magnificent creatures, then Torun has no time for them. Instead, she speaks with those who freely give their time and money to care for these cats. One woman cooks over 20 pounds of chicken a day to feed the neighborhood furries. Another man suffered a nervous breakdown in 2002 and has since spent his free time and spare money feeding the cats by the docks. He knows full well that this is what saved his life. “God brings us together in different ways,” he tells Torun. “For me, it was these animals.” The woman would agree but she needn’t say it.

The cats return the favor. One seaside restaurant was suffering due to an infestation of mice until one devoted and territorial mouser showed up and cleaned house. He now lives at the restaurant, dining on mice and some of the best scraps around.

Another cat, Smokey, decided to take up residency at a meat and cheese shop. The owners describe her as a cat with manners — she doesn’t bug the patrons for food but paws at the window when she wants dinner. For her respect, she is rewarded with smoked turkey and manchego cheese.

There are more. Thousands more. More tabbies, more calicos, more Angoras; more ginger cats, white cats, black cats, piebald cats, more cats than you know what to do with. Some fight for territory, some fight for scraps. Most just lounge and watch, waiting to be pet by a passerby, which almost everyone does.

I have been lucky enough to share my life with three cats — Mr. Bojangles, Joseph and Clark Gable — and am a better person for it. And that’s just three cats; Istanbul has legions. I can’t image how much better off they are for them.