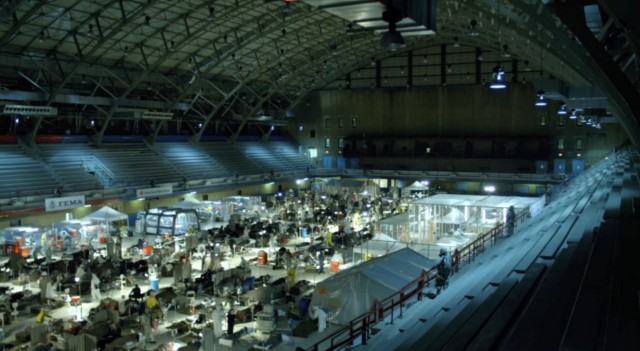 One of the most powerful — and frightening — film themes is global pandemics. Diseases already seem to spread without us fully understanding or being able to control them, and rapidly evolve to become resistant to our defenses. It’s not much of a leap to see a very bad future or to imagine that they might be bio-weapons or even alien life forms. My favorite film in this genre is the original 1971 thriller The Andromeda Strain, a film that’s still anxiety-provoking 40 years later.

That’s why I was perfectly primed for Contagion, though was a bit disappointed how cerebral and un-thrilling it was for a tense action thriller. Filmed in a documentary style (think District 9) and with an interesting, if occasionally complicated timeline, it’s a fascinating primer on how an illness can spread rapidly and how difficult it is to identify, contain and cure.

Contagion initially focuses on international traveler Beth (Gwyneth Paltrow) who returns from a trip overseas to her home in Minneapolis and then collapses and soon dies in front of her husband Mitch (Matt Damon). Who did she interact with? What did she touch? How is the as-yet unidentified disease transmitted?

It shifts to Ellis Cheever (Laurence Fishburne) and Erin Mears (Kate Winslet) of the Center for Disease Control, and field specialist Leonora Orantes (Marion Cotillard) of the World Health Organization. Their task: figure out the transmission vector, slow down the disease and come up with a cure and vaccine.

Meanwhile, people are dying and Alan Krumweide (Jude Law) is causing trouble and creating paranoia with his conspiracy theories about drug company schemes to make millions.

The cast includes a lot of talented actors, some of whom get far too little screen time. Most notably, veteran medical thriller actor Elliott Gould plays San Francisco-based disease  transmission expert Ian Sussman. An interesting role and pivotal in the movie, but he has maybe six minutes of screen time total.

As a blogger I also found the character of Krumweide (Law) interesting. Scriptwriters as a general rule like to exaggerate the antisocial tendencies of nerdy characters (think of Wayne Knight as Dennis in Jurassic Park) and there were definitely scenes where Krumweide was a wild-eyed lunatic, but director Steven Soderbergh also tapped into our collective suspicion of very large corporations with some of the dialog about the conspiracy of big pharma and the self-preservation behaviors of the Army, even as people were dying throughout the United States and around the world.

Still, the performances were professional and believable but there was curiously little passion and drama in this medical thriller. People might react with quiet disbelief in real life, but when I’m in a movie theater watching a film for entertainment I want it to be more dramatic, more exciting than regular life, and Contagion just isn’t that film.

Even with the scenes of society starting to break down as people panic and loot stores, shove each other out of the way to get government-issued food rations and exploit the misfortune of others, there was a distance that made it considerably less frightening. Masked gunmen broke into a neighbor’s house across the street rather than trying to break into the Emhoff house.

Do I recommend Contagion? Yes. It’s a smart, thoughtful and disturbing thriller. It has some rough edges but compared to the usual banal theater fare, it’s well worth your time and money. Just wash your hands afterwards.

‘The mystery of buster’