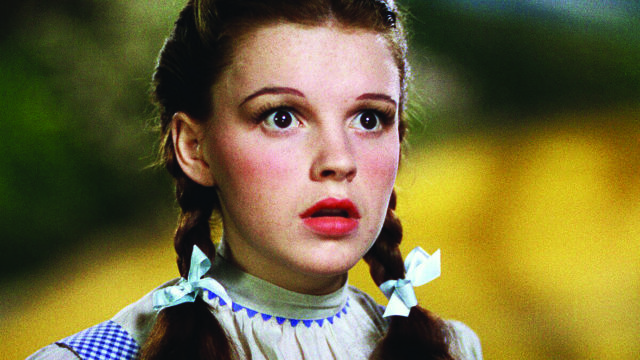 It didn’t take long for Judy Garland to get started. Born Frances Ethel Gumm in Grand Rapids, Minnesota, on June 10, 1922, Garland strode onto the vaudeville stage with her sisters in 1924, solidifying her future as an entertainer. In ’34, the trio adopted the stage name “The Garland Sisters,” and in ’37, young Judy sang a song to a portrait of Clark Gable in MGM’s Broadway Melody of 1938 and became an overnight success. The Tiffany studio had signed Garland to a contract only two years prior—her screen debut was Pigskin Parade—and two years after Broadway Melody, Garland would step into those iconic ruby slippers for a movie with no equal: The Wizard of Oz.

Garland was a teenager when she filmed Oz, playing Dorothy Gale as a young girl caught between childlike innocence and adolescent yearning. Just listen to her contralto voice quiver as she delivers “Over the Rainbow.” Hardly anyone watching Oz in ’39 knew the life Garland was leading—and would continue to lead—backstage, but they could feel it. When Garland sings, you feel everything.

But as legendary as the backstage tales and gossip are, what continues to entrance audiences is the magic Garland captured on screen, which is why both TCM and The Criterion Channel are celebrating Garland’s centenary all June long.

For those with TCM in their cable package, Garland is June’s “Star of the Month,” with 31 of her films showing Friday nights starting June 3. Oz is on the schedule (June 10), as is Pigskin Parade and Broadway Melody of 1938, both June 3—the same night you can catch Garland’s successful series of girl-next-door pictures co-starring
Mickey Rooney.

For you streamers out there, The Criterion Channel’s Garland celebration features 13 of her signature performances, including a personal favorite: 1948’s The Pirate, starring Garland alongside Gene Kelly—the second of their three pairings. The whole picture is a hoot, but the scene where Garland’s Manuela learns that Kelly’s Macoco is a phony is one of the best destroy-every-last-thing-in-the-room fits of rage captured on celluloid this side of Citizen Kane.

She could sing, she could act, she could dance and she could scat. She could break your heart with a chord and lift your soul with a smile. Some stars fade, but Garland’s never will.

And while you’re on The Criterion Channel, why not give something completely different a try? Shot in stark black and white like a moving Weegee photograph, Lionel Rogosin’s On the Bowery is a stunning piece of filmmaking instrumental in dropkicking American movie making out of the studios and onto the streets. The story here is of an alcoholic (Ray Salyer) down on New York’s skid row. It’s partly scripted but totally authentic—the bridge between documentary and neorealism. And it’s terrifying in its frankness. How Rogosin got the camera into these areas is a stroke of genius. How he depicts these derelicts is a stroke of grace. It’s not a movie that gets enough praise. But thanks to a restoration in 2006 by L’Immagine Ritrovata and a subsequent home video release by Milestone Films, On the Bowery continues to reach new audiences. And the timing couldn’t be better for more to discover it on The Criterion Channel as a new generation of Americans grapples with another homelessness crisis brought on by substance abuse.