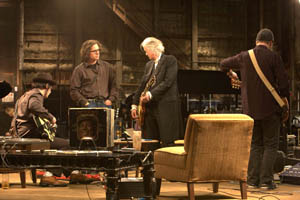 What do Jack White from The White Stripes, The Edge from U2, and Jimmy Page from Led Zeppelin have in common, besides the obvious? Each represents a prominent part of a musical movement that thrives around one of the most significant instruments created in the past century: the electric guitar. Filmmaker David Guggenheim (An Inconvenient Truth) takes on the subject in his new documentary It Might Get Loud and attempts to crank the amp to 11 by inviting the three rock legends to discuss their art form on a stage together.

“We’ll probably get into a fist fight,” murmurs White in a car en route to the studio when asked about convening with the other performers. Nothing could be further from the truth, since the amount of fidelity and worship for the guitar reaches a harmony that is best depicted by the jam session that later ensues. Divided into chapters, each rocker explores his individual “Rock and Roll Breastfeeding,” rise to stardom, influences, experiments, and emotional attachments towards the musical tool.

Under the same genre, the film presents exploration of style and substance throughout the interviews in a dry and straightforward fashion. The melding of punk, blues, classic and pop rock are among the traditions that we are exposed to by our actual Guitar Heroes. They all value digital sound processing to enhance and experiment with sound, but each fancies a different way to escape from life with their music.

We watch Page play the mandolin in his beautiful garden one day, then cut to White ripping his custom-made electric until the Fender is drenched in blood.

Between old tapes and photos of performances, we go to Dublin, London and Tennessee to visit the birthplace of their careers, while being awed with talent: Jack White shows how to make an electric guitar out of wood, wire, a coke bottle and some nails. The Edge shows us how he loves to hook up his amp at the beach so it sounds like he’s playing two guitars. Jimmie Page plays us some of his favorite old records and divulges how he came about writing the epic “Stairway to Heaven.” These intimate and personal pieces are intercut with their conversation together but fail to follow any sort of narrative, a consistent problem in the film.

In its conception, this rock-documentary had strong potential to unearth a groundbreaking evaluation of classic and contemporary music. Having three different generations of the very best electric guitar artists unite in creative and reminiscent musings is, to say the very least, a rare opportunity. Yet, of the roundtable footage he shot, Guggenheim gives us seven or eight minutes, tops.

With the depth of this event going skin deep, one can only wonder if the message was lost, or if it was even there to begin with. As absorbing as the individual portraits and historical accounts may be, the initial excitement that is introduced during the opening credits for our rock star pow-wow diminishes rather quickly.

Satisfaction for It Might Get Loud could subsist in the same realm as a long guitar solo: If you’re into the groove, this could be a real head-banger. If you can’t relate to the tune, then a more appropriate title might be It Might Get Dull.