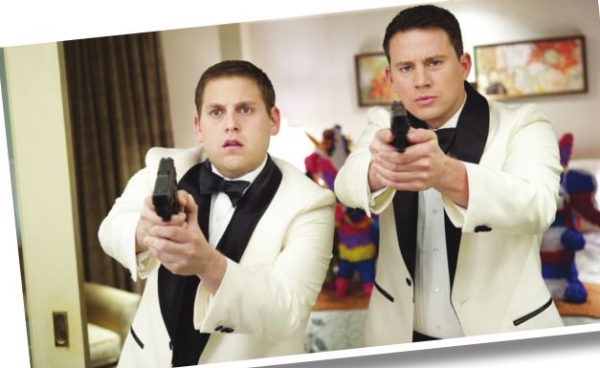 Most of the big laughs in 21 Jump Street arrive in the first half, but take a moment to consider that phrase “big laughs.” What was the last stupid Hollywood comedy — good-stupid, not stupid-stupid — to offer actual, audible big laughs? Heartily raunchy and rather sweet, 21 Jump Street comes from the 1987-1991 Fox TV show, in which Johnny Depp and his incredible swirly hair led an ensemble of younglings playing barely legal police officers posing as high school students. The movie features Jonah Hill of Superbad and Moneyball co-starring with Channing Tatum. You can say a lot of things about 21 Jump Street. You can say Tatum is luckier than he is talented. You can say the humor isn’t for you. You can say you’re offended by the poster and advertising tag line, which captures the spirit of the thing but which we won’t repeat here, lest faint hearts and fair readers get the vapors.

But the movie works, thanks to its odd-couple chemistry and artfully thrown-together air. Last week, while everyone was speculating whether Wall-E director Andrew Stanton could successfully deliver his first live-action hit (answer: no) with John Carter, absolutely no one was speculating whether Cloudy With a Chance of Meatballs co-directors Phil Lord and Christopher Miller were up, or down, to the demands of their live action feature debut. They were, for the record.

What puts 21 Jump Street ahead of the Starsky & Hutch movie a few years back, for example, is a simple matter of modesty and scale. Early on, Tatum’s character Jenko, stuck on bike patrol with his friend and partner Schmidt (Hill), mutters: “I really thought this job would have more car chases and explosions.” They come eventually, of course. But getting there is over half the fun, because the script, by Scott Pilgrim vs. the World adapter Michael Bacall, charts the shifting landscape of high school cliques and dynamics in clever ways.

Jenko and Schmidt weren’t friends in high school, as we learn in the 2005-set prologue. Jenko was the jock triumphant and a lousy student, and Schmidt (sporting an impressive mouthful of braces) spent most of his waking hours being embarrassed by his parents. A few years later, graduating from the police academy together, they’ve become pals, leaving enough of their high school selves behind to bridge the former social gap. They’re ready, in other words, to test their friendship by going back to high school, undercover, assigned by their superior (Ice Cube, snarling every second) to arrest the dealers and suppliers of a dangerous new synthetic drug.

The school yearbook maven, played by Dave Franco (brother of James, and it’s obvious), is the connection. Schmidt lands the lead in the school musical (Peter Pan), while Jenko struggles to learn basic science concepts, no picnic for a guy who never memorized the Miranda rights. “You have a right to remain an attorney,” he tells a perp at one point.

The idea behind Jenko and Schmidt’s disorientation relates to how much high school life has changed in a short time. “Environmental awareness, being tolerant … if only I’d been born 10 years later!” Schmidt says, awestruck. The movie takes the romance between Schmidt and the dealer’s sometime girlfriend (Brie Larson, a great match for Hill’s easygoing delivery) more seriously than you expect, which is also true of the tetchy friendship between our heroes, the cops lost in John Hughesville. Little turns of phrase stick with you, as when the drama teacher (Chris Parnell) begins a selfimportant lecture: “When I was a young actor starting out in New York … state … Albany, to be exact.”