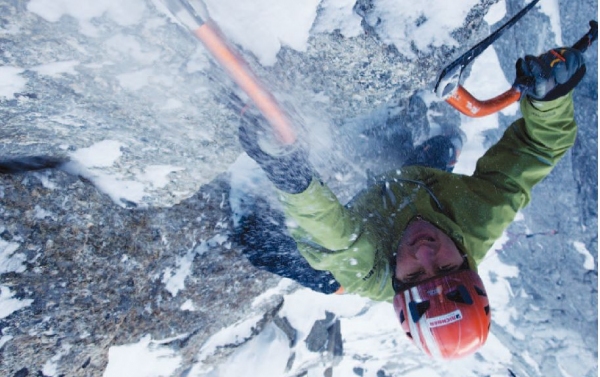 When Peter Mortimer premiered his first movie Scary Faces 10 years ago at the Boulder Theater, the local filmmaker had his doubts.

“We had no idea what was going to happen,” Mortimer says. “No one had ever done a big screening like that, and everyone was saying, ‘A climbing movie at the Boulder Theater? What’re you thinking?’” Mortimer’s parents were so worried about low attendance that they bought 50 tickets for all their friends. Stressed by the pressure, Mortimer left town.

“On the opening night, I came back and saw a line of people literally winding around the block,” Mortimer says. “The show was entirely sold out. There were such good vibes that we could’ve put anything up on the screen and everybody would’ve loved it.”

A decade later, Mortimer’s company, Sender Films, along with fellow film company Big Up Productions, will host the fifth annual Reel Rock Film Tour on Sept. 16 at the Boulder Theater. The largest climbing film event in the world, the Reel Rock tour will show at 150 different locations across five continents this year.

This time, the tour consists of five shorter films, including a look at Chris Sharma’s newest project in Catalunya, Spain; Daniel Woods’ and Paul Robinson’s efforts to advance the difficulty of bouldering; and footage of the little-known speed-alpinist Ueli Steck’s record-breaking ascents in the Alps. Four cinematographers shot all the films, including Mortimer, fellow Sender Films founder Nick Rosen, Big Up Productions cofounder Josh Lowell, and cameraman Rob Frost.

The four filmmakers met 18 years ago as undergraduates at Colorado College in Colorado Springs. Although none of them were studying film at the time, they all went on to pursue the obscure avenue of outdoor adventure films, eventually joining forces to create the Reel Rock Tour.

“The four of us make up a big portion of the people in the world who are making these cutting-edge climbing films right now, so it’s pretty strange that we were all at this tiny little school at the same time,” Rosen says.

After graduating, Lowell went on to found Big Up in 1997, inspiring Mortimer to divert from his scholastic path as a geologist and pursue film. After the successful reception of Scary Faces, Mortimer made his second movie, Front Range Freaks, in 2003, using the profits to pay his way through film school at University of Southern California.

“When I went to USC I thought I would never do another climbing movie; in fact, I was kind of embarrassed by it,” Mortimer says. “I later realized that because the climbing community was so psyched and supportive, I had found a niche. It developed from this embarrassing thing to this really cool thing.”

Mortimer completed school and returned to Boulder to establish Sender Films. Meanwhile, Rosen was working as a consultant specializing in international relations in New York.

“Pete just called me up and asked if I wanted to work as a writer for this film he was making,” Rosen says. “It seemed like an antidote for the crazy life in New York I was living, so I decided to come out to Boulder on a provisional basis for a few weeks.”

Weeks turned into months, and eventually Rosen surrendered to life in Boulder, phoning his roommates in New York and requesting they sell all the belongings he had left behind.

“I had to start from zero. I left this career that I had invested a decade of education and work in,” Rosen says. “It was never my objective to make climbing films; that was Pete’s thing. It is an incredibly romantic proposition though, this idea of the dirtbag hero

who goes out and executes these Olympian feats in total obscurity because he loves it, not because there’s money in it. Then he comes down and cooks up some ramen in the back of his car — it’s ripe for storytelling.”

Since Rosen and Mortimer joined forces, Sender Films has won the World Tour award at the Banff Mountain Film Festival, Best Climbing Film at the Kendal Film Festival and an Emmy for Sports Cinematography, among other awards. Their most recent project, a six-part television series co-produced with National Geographic International, was recently released on DVD. The team is currently working on a documentary about the history of climbing in Yosemite.

“Right now we’re doing more things simultaneously than we’ve ever done before,” Mortimer says. “It’s amazing how much the climbing film industry has grown in the last decade and become a huge part of the climbing scene that didn’t even exist before.

It’s been really inspiring to help grow something out of nothing.”

Rather than seeing each other as rivals, Big Up and Sender Films have often combined their efforts on films, such as King Lines in 2007. They’ve found that the success of one company only furthers public interest in climbing films, which ultimately benefits the other.

“We’re all really good friends, but we always make fun of each other’s work,” Mortimer says. “Josh is much more of an artist and a purist. He loves the physical athletic discipline of climbing, whereas Nick and I are storytellers. We’re interested in the psychological side, the adventures and the crazy characters.”

While Big Up is located in the media mecca of New York, Mortimer and Rosen have found Boulder to be a superb location for Sender’s headquarters. Rather than being hindered by their distance from the entertainment hubs of the country, Rosen finds the space refreshing.

“Increasingly, people can be part of Hollywood or New York without actually having to be there. I think we’re a good example of that,” Rosen says.

“Those big media centers seem kind of tapped out and bereft of good ideas. I think that the notion that you have to be in L.A. or New York to be cool and creative is long gone. It feels good to be kind of an outsider from that and to be part of the galaxy of local filmmakers in Boulder.” Mortimer agrees, noting that the entrepreneurial nature of Boulder combined with the strong presence of outdoor enthusiasts has resulted in a cache of other local outdoor filmmakers, including Warren Miller, Serac Adventure Films and the Ocean Preservation Society, makers of Oscarwinning documentary The Cove.

“In the end, as a filmmaker you can do the smartest thing, the most clever thing, or even the most beautiful thing and people won’t connect with it,” Mortimer says. “What people do connect with in climbing films is the metaphor. Someone has a vision or a dream and they go through this amazing journey internally and externally to achieve it. The people who appreciate that the most aren’t necessarily the hard-core climbers — they’re people like my grandma in New Jersey who’s like, ‘I get it!’ Anyone can connect with the journey of achieving a dream.”