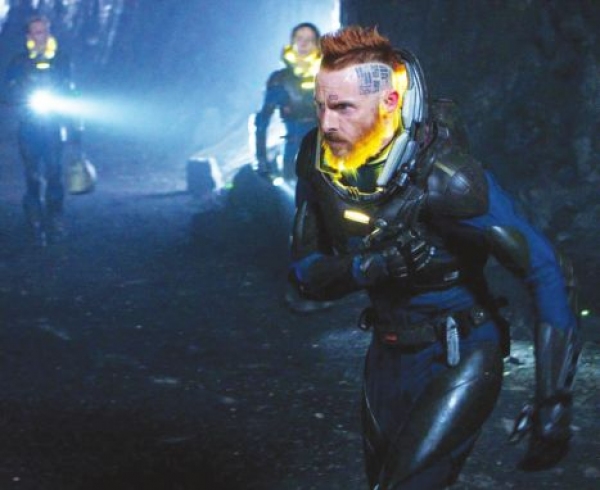 I so wanted to love this movie. I’m a big fan of director Ridley Scott.

How can a film that purports to offer the backstory behind the blockbuster 1979 film Alien not be amazing? I rank Alien as one of the 10 most influential science fiction films ever made, and getting its director back behind the camera to make another epic when his last scifi flick was the equally superb Blade Runner seems like a sure winner.

Unfortunately, it’s not. Prometheus is visually stunning, there’s no question about it, and has some of the very best 3-D I’ve seen, even comparing quite favorably to the gimmicky 3-D James Cameron used in Avatar. The story is epic, and revolves around one of the most fundamental questions we humans have, something that goes back as far as we have told stories: Who are we and where did we come from?

The problem is that there’s insufficient narrative thread to weave together everything that happens in the film, and much more importantly, there is a large cast of characters who behave in generally inexplicable ways. Why do some characters, like tough guy Fifield (Sean Harris) change personality halfway through the film? Android David (superbly played by Michael Fassbender) is perhaps the most inexplicable of all. Though an obvious nod to the malevolent computer HAL from 2001: A Space Odyssey, David still baffles with his behavior: What programming causes his actions, and who programmed him?

Alien was also notable for the camaraderie of its ship crew, a diverse lot but all aware they were stuck on a spaceship millions of miles from Earth. The crew of the Prometheus didn’t seem to like each other, by contrast, and there was never a moment where they seemed to gel as a team.

The film opens in the mid-21st century with anthropologists discovering cave paintings in northern Great Britain, paintings that share common elements with others discovered throughout the world. But the civilizations never interacted: How can the paintings have similar elements? Putting the clues together, they identify a far distant planet in another galaxy, a planet that has an Earth-like atmosphere. Is that the origin of mankind?

The spaceship Prometheus is built and its crew, other than David, is kept in stasis. When they awaken in a ship with clear visual nods to the Nostromo, we meet lead scientists Shaw (Noomi Rapace) and Holloway (Logan Marshall- Green), along with the detached corporate representative Vickers (Charlize Theron), Prometheus captain Janek (Idris Elba), another dozen or so crew members, and even a holographic elder statesman and mission sponsor Peter Weyland (Guy Pearce, wasted in a role with so much prosthetics).

Great science fiction, and great movies, are a magical blend of story and setting, scenes and dialog, acting and engagement. Prometheus comes close, but the half-baked story ends up undermining the excellent performances and amazing visuals, producing a film that will be a popular sci-fi summer movie but, sadly, not a movie that will stand in the pantheon of great, epic science fiction. I expected better of you, Sir Ridley Scott.