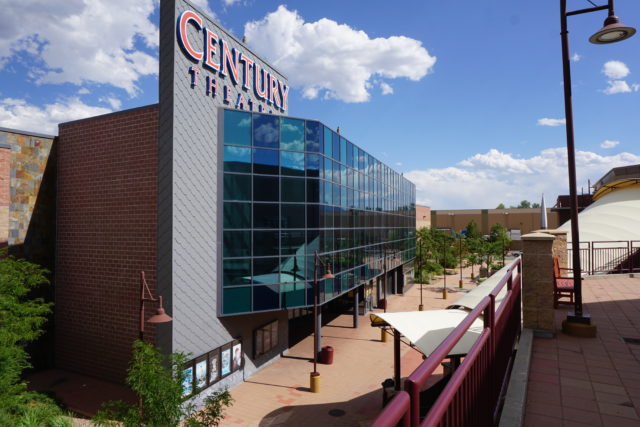 It’s Tuesday at 3 p.m. outside the Century Theater in Boulder’s Twenty Ninth Street Mall, and it’s quiet. Too quiet.

You’ll have to excuse the cliché, but it fits. This courtyard should be filled with voices of patrons coming and going, taking advantage of Discount Day and talking about movies: What they saw, what they plan to see next and what movie the New York Times recommended as the must-see for the season.

But it’s not. It’s desolate. Only a handmade sign taped to the door directing deliveries to the back suggests that a person might have business here. Those doors, caked in dirt and grime, were locked almost five months ago and haven’t opened since. “Now Playing” movie posters for Parasite, Onward, The Way Back, Greed and a dozen more — their text faded, their colors bleached by daily blasts of sunshine — flank the doors like ghostly remnants. Ten yards back, two escalators endlessly grind on, the mechanical whine of metal on metal as they transport no one and nothing while the wind whistles eerily through the hollow parking garage. Standing here feels like you’ve walked into the opening of Once Upon a Time in the West, but with fewer horses.

Beeck, who produces the Boulder International Film Festival (BIFF) with her sister Robin, is excited. And with good reason: Back in June, they launched the BIFF Drive-In at the Boulder Municipal Airport. With a 40-foot screen and enough space for 160 cars, BIFF’s drive-in features live music alongside a movie every Saturday night, from now through September. Maybe longer if the weather stays nice.

“We just thought it would be frickin’ fun,” Beeck says, explaining that the a-ha moment happened in April over a Zoom happy hour. At some point in the conversation, someone said, “drive-in.”

Harder than you think. Getting the movies and booking the acts was one piece, that they knew, but wrangling the City of Boulder, the Boulder Public Health Department, finding the location, figuring out the logistics of  moving cars in and out of the airport took longer than they anticipated. Beeck says they wanted to get the drive-in up and running in May but had to settle for June 20 for their first screening. It’s been a smashing success since.

BIFF’s drive-in isn’t the only place in town where you can watch a movie through your front windshield: The Dairy Arts Center also hosts a weekly drive-in, though it takes place in the parking lot behind the center, projected on the building’s white walls, with movies screening Friday and Saturday nights.

“And we sell out every show,” Glenn Webb says. “But, we only have 20 parking spots.”

Webb is the programmer of the Dairy’s Boedecker Theater, which has been closed since March 16. Furloughs quickly followed, but Webb stayed with the Dairy, volunteering his time to set up the Boe’s virtual theater and drive-in, even producing a one-hour Zoom-broadcasted fundraiser, featuring live performers, a single technician and Webb as master of ceremonies.

“It felt like I was producing a Jerry Lewis telethon,” Webb says chuckling.

The fundraiser worked; enough to get the Boe to January. And we should be able to see movies in a theater by January, shouldn’t we?

Webb hopes so: The drive-in is fun, but it can’t create the same experience of sitting in a theater, a community in the dark, “all breathing the same air.”

“It’s kind of scary,” Kait Edwards, general manager of The Lyric in Fort Collins, says. “We’re lucky that we have our outdoor theater.”

As of this writing, The Lyric is the only Front Range cinema doing in-house screenings. They also have an outdoor theater, which allows for more patrons. Inside, The Lyric has three houses, two with 64 seats and one with 220. Under the current capacity restrictions, that limits The Lyric to 13, 13 and 50, respectively. Outside, they can have 80 people, and as Edwards says, the outdoor theater is the draw. Partly because Coloradans love spending time outside and partly because the movies they screen have a repertory draw, from the Harry Potter series to The Never Ending Story. Inside, you’ll find a different stripe of cinema, smaller titles like the English period drama, Summerland, and the low-budget horror movie, The Rental. Conspicuously absent are those big blockbuster titles that dominate the summer calendar. All have been postponed, some for a few months, others indefinitely.

“If we extend a couple more months of not having any titles, we’re going to get to the fall when the weather’s going to turn, and then the outdoor screen is not going to be comfortable to be in,” Edwards says. “We’re playing it fast and loose right now.”

“In Colorado, we have the green light,” Keith Garcia, artistic director at Denver’s Sie Film Center, says. “All of us have had the green light for a month.”

But, the Sie isn’t open, and probably won’t be for awhile. As Garcia points out, deciding when to open will be a question of “How you want to balance the cost of being open with what is available.”

Like The Lyric, the Sie has three screens, and under the current guidelines, their numbers would be 10, 50 and 50.

“So it’s not an absolute dismal number,” Garcia says. “It could, actually, turn a profit.”

But for that to happen, moviegoers would have to show up.

“I’m not quite sure people are ready yet, to see movies inside,” Edwards says. “Which I totally understand: It’s a bit scary to be in a room for two to three hours, and having to wear a mask is not the biggest appeal right now.”

Not to mention the health of staff and patrons, which continues to weigh heavily on every decision. As Webb points out, the thought of a patron coming to the Boe, contracting COVID while watching a movie and dying is “devastating.”

Then there’s the money. Talk about the coronavirus and cinema and the conversation is bound to touch on two movies: Tenet and Trolls World Tour — a Universal release that bypassed theaters all together back in April (much to the chagrin of corporate chain theaters). It was available via Video On Demand to the tune of $19.99 for a 48-hour rental.

In an alternative non-COVID world, The Lyric would have screened Trolls World Tour. The Sie Film Center would not. But they both would likely have had Tenet, the Christopher Nolan blockbuster that was supposed to open up theaters and usher the summer cinema season back on July 17. It was not to be: Tenet was delayed by Warner Bros., then dropped off the calendar altogether. As Garcia says, the moves made the entire 2020 release calendar feel “unstable.”

Tenet wasn’t the only one. Disney’s Mulan was also delayed, then taken off the calendar, as have art-house friendly fare like The French Dispatch (Fox Searchlight) and The Green Knight (A24).

In the meantime, The Lyric will rely on its outdoor screen with repertory programming while BIFF plays the hits of festivals past. The Sie, the Boe and the University of Colorado Boulder’s International Film Series: they’ll all have to rely on virtual theaters.

“They’re kind of a placeholder,” Pablo Kjølseth, IFS programmer, says. “And I think they’re going to be around a little bit longer than the distributors had hoped for.”

IFS, which specializes in 35mm and archive prints, had its spring programming cut short when CU closed down all in-person events in March. Not long after, a group of independent distributors (Kino Lorber, Greenwich Entertainment, Oscilloscope, etc.) banded with independent theaters to present virtual theaters, which allowed patrons to rent a movie from a theater of their choice, splitting the ticket cost 50/50 between the theater and the distributor. Even better, virtual theaters require no guarantees (the money a theater has to pay upfront to book the film) from the distributor, allowing theaters like IFS to extend their programming. While Kjølseth only has one screen on campus available to him, IFS’ virtual theater has over 40 movies to choose from, some with post-screen Q&As.

“And some do OK,” Kjølseth says. “And some don’t get too much traction at all, but we’re happy to have the options there.”

But if no one knows about those options, does it matter? Kjølseth has spent the last six months doing double time to make sure IFS customers are aware of the wealth available at their fingertips with two podcasts: Cox & Kjølseth, with filmmaker Alex Cox, and Sprocket Damage, hosted by IFS’ projectionist Jason Phelps; and a post-screening Zoom chatshow, Z-Briefs, with cinema studies student Anastasia Mathews.

“Mainly, it’s a way of trying to keep our customer base somewhat engaged,” Kjølseth says.

Kjoølseth has more in the tank: Specialty screenings, programming ideas, he’s even floated the idea of operating drive-ins in the campus’s vacant parking lots or using Farrand Field as a place to show free movies to a socially distant crowd.

Kjølseth’s goal is simple: “Keep the damn thing alive,” and outdoor screenings might be the key. Edwards calls The Lyric’s outdoor screen their “saving grace,” and drive-ins are working for BIFF and the Dairy. Garcia says the Denver Film Society will soon open theirs, inside one of Red Rocks Amphitheater’s parking lots. Film on the Rocks will live on, in some capacity, at least.

But back at Century Theater, next to these faded-out posters from five months ago, the hope for cinema seems far less optimistic. As of this writing, the theater chains have acknowledged that they can’t flip the lights on at the same time: It’s going to be state-by-state, city-by-city. There are a handful of movies penciled in for late August and Mulan might be one of them — though most moviegoers will probably watch it as a $29.99 rental on Disney+ starting Sept. 4. And Tenet is back on the board, this time for Sept. 3, but we’ve been here before.

Webb admits we’ve passed the point of a grand reopening, and the future will most likely be a slow trickle. The Boe will have to rehire and retrain staff, build relationships with the community again, and convince people that it’s safe to enjoy a movie. It’s possible that won’t happen until a vaccine is readily available. It’s also possible that some will never see a movie in the theaters again.

The Lyric, the Sie, IFS and BIFF all face a similar future. Beeck is aware that if things don’t improve by winter, they’re looking at a socially distant 2021 festival, a prospect “that’d be tough for volunteers and attendees.”

It doesn’t just feel tough. It feels like the movies packed up and left, and might never come back.