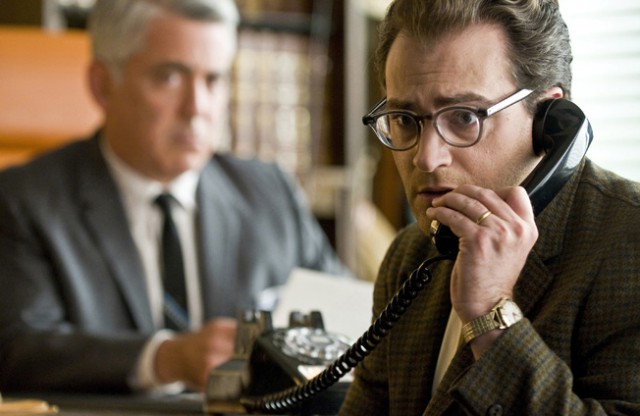 A Serious Man is a tart, brilliantly acted fable of life’s little cosmic difficulties, a Coen brothers comedy with a darker philosophical outlook than No Country for Old Men but with a script rich in verbal wit. This time it’s God or chance, or fate with a grudge against the Minneapolis suburbs wielding the stun gun. The most we can do, the film implies, is stick to our principles and hope for the best.

Physics professor Larry Gopnik, played by the excellent Michael Stuhlbarg in precisely modulated degrees of panic, is God’s chosen sufferer, coping with a failing marriage, his son’s imminent bar mitzvah, a South Korean student bribing him for a better grade, and a brother (played by Richard Kind) plagued by a literal pain in the neck, a cyst in need of constant, mysterious drainage. The time is 1967. The film begins with a Yiddish-language prologue set a century earlier in a Polish shtetl, in which a man and a woman are visited by an ancient character (Fyvush Finkel). The wife thinks he may be a dybbuk, or supernatural intruder, and deals with him in a way that either saves them or curses them we don’t know.

Elsewhere in A Serious Man, a rabbi relays to Larry the fable of The Goy’s Teeth, in which a dentist finds Hebrew letters where they shouldn’t be. This scene is a miniature comic masterpiece. A Serious Man may be a tiny bit thin to be a masterpiece itself (the female characters are marginalized), but it’s very close, I think. It’s certainly my kind of Coen brothers film; I responded to it more strongly than I did to their previous comedy, Burn After Reading, as well as to their Oscar-winning big deal, No Country.

Larry is a dedicated educator but a bit thick when it comes to scanning the horizon for relational troubles. His wife (Sari Lennick) has grown attached to another member of their synagogue, Sy Ableman, an ostentatiously substantial man with a voice, as the Coens’ published script indicates, that “vibrates with a warm, sad empathy.” Character-actor and voice-over artiste Fred Melamed plays Sy, and the role is unthinkable in any other hands. You won’t find a more meticulously cast ensemble this year. From Stuhlbarg’s first moment on-screen (we see him from behind at the chalkboard, in the throes of a proof) to the shading and comic assurance George Wyner brings to Rabbi Nachtner, the closest the film comes to sincere wisdom and counsel, the Coens make the most of Larry’s step-by-step calamities.

I’ve always been ambivalent about the Coens’ sardonic, we’re-all-screwed stance and too often, in good films and less good ones, they’ve relied on sociopathic violence and calamity to solve their storytelling problems. (Everything from Raising Arizona to Barton Fink to O Brother, Where Are Thou? ends with murderous avengers wreaking havoc.) A Serious Man is no more serious than those pictures on the surface.

Is it a serious disquisition on Judaism? Well, “serious” is a tricky word. Is it a seriously canny remembrance of what it was like to grow up in a largely Jewish suburb, surrounded by uncomprehending gentiles (or hostile ones, in the case of Larry’s neighbor, the one who shoots Jews in cold blood in Larry’s dreams)? Yes, it is. Working with their usual ace cinematographer, Roger Deakins, and their usual ace composer, Carter Burwell, the Coens remember these newly planted suburban streets, which we see at one point from the point of view of Larry, fixing the TV aerial, as a boundless source of anxiety.

A Serious Man is best approached as a bookend to Fargo, the Coens’ other Minnesota-set tale of woe (though that one, much to its box office betterment, was offset by the happy ending afforded Marge and Norm Gunderson). The writing in Fargo seems special and uniquely, satirically acute to me, even when the Coens pull their theater-of-cruelty games on their characters. Likewise, A Serious Man has a script, a clarity and a tone that come from craftsmen and wits (dour ones, but wits all the same) at the peak of their game.

The shame of a nation