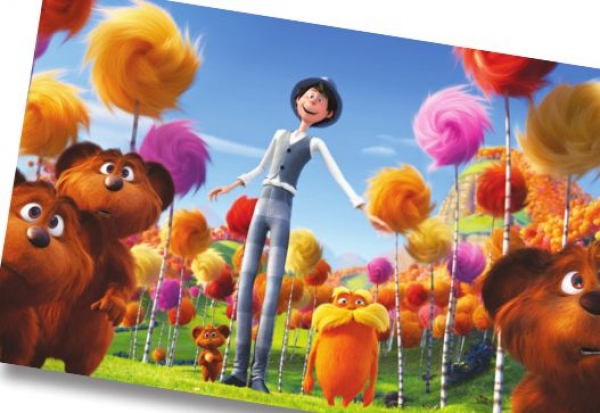 The new animated feature The Lorax, known in its entirety as Dr. Seuss’ The Lorax to keep it straight from “John Grisham’s The Lorax,” does a few smaller things right but the bigger things not quite. I’ve come to fear these movies. I love Seuss so much, even his second-shelf works. Who doesn’t feel protective of authors and illustrators they love? And not just because we were young when we made their acquaintance.

As with Horton Hears a Who! four years ago, the production design and computer-generated animation in this new Lorax respect the basic lines of Theodor Seuss Geisel’s illustrations, his voluptuously curvy universe of serious whimsy. Both the Horton and Lorax films work better, certainly, than the live-action Seuss pictures How the Grinch Stole Christmas and the seriously not-good Cat in the Hat.

The Lorax is a little more like it. A little. But you couldn’t accuse the film of practicing what it preaches: careful stewardship of a precious resource.

The message tends to get lost in all the clanging slapstick and Wall-E imagery. Wall-E had the courage of its convictions as well as beauty and artistry; The Lorax is just another OK feature-length animated edition (in 3-D, if you choose to pay for it) of a Dr. Seuss book.

The filmmakers, headed by director Chris Renaud and screenwriters Ken Daurio and Cinco Paul, all of Despicable Me, regard the 1971 Seuss book’s pro-envi ronmentalist entreaties seriously in theory, not so much in practice. Cooked-up elements include a corporate megalomaniac villain and a pair of nominally sympathetic young humans. The Lorax in The Lorax, the guardian of the trees voiced, dully, by Danny DeVito, is even more secondary than he was in the book.

In this version of Thneedville, no living thing grows: Trees and shrubs are inflatable plastic, the town is maintained with Truman Show-like fakery, and the apparent mayor of the town, Mr. O’Hare (Rob Riggle), has made his millions selling bottled air. Young Ted (voiced by Zac Efron) is eager to impress the teenage Audrey (Taylor Swift), so he seeks out the faraway Once-ler (Ed Helms) who holds the secret to what Audrey wants most: a living tree, a reminder of better, greener days.

Most of the picture, as did the book, unfolds as a flashback to the Once-ler’s rabid capitalistic youth, when he harvested the precious Truffula tree for its velvety tufts and commercial prospects. Taking its cue from a single line in the original about the Once-ler’s family, The Lorax brings in a venal hick crowd straight out of Million Dollar Baby to underscore the moral about greed being bad. The young Once-ler doesn’t question his own business goals, and can’t see the forest of his misjudgments for all the trees he’s leveling.

A good deal of this comes from the original slim volume by Seuss. By the time the good doctor published his warning about despoiling our planet willy-nilly (cue the Fox News objections!), his adopted home base, La Jolla, Calif., had become a swank coastal holdout to the schmutzy L.A. smog, a two-hour drive north. Every book comes from somewhere; Seuss’, I’m guessing, came from his concern over the threatened devaluation of paradise, Southern California style.

The book, unusually blunt and even humorless for Seuss, has become a conflicted diversionary tactic on screen. Its makers were plainly nervous about selling the message. And so they gussy it up with lots of vehicular chase sequences and musical numbers of uneven quality and after a while you long for another trip to see the Once-ler, just because he’s a loner and you could use the break. The Lorax comes back around by the end to where it needs to be, i.e., in Seuss’ corner. But there’s a lyric about life in Thneedville painting the place as “plastic and fake and they liked it that way!” And it’s too close to the movie’s truth for actual movie-going comfort.