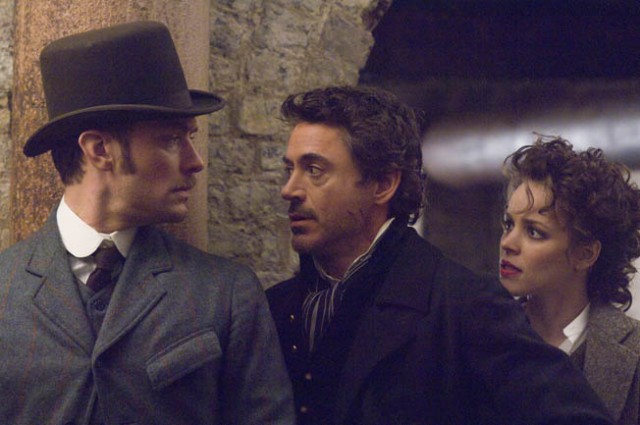 I’ve been a fan of Sir Arthur Conan Doyle’s legendary detail-oriented detective, Sherlock Holmes, for as long as I can remember. The Holmes canon is extraordinarily rich and directors as talented as Billy Wilder and Barry Levinson have tackled it with varying levels of success and there are more than 200 Holmes films and TV shows.

It was quite a challenge for director Guy Ritchie to reinvent Sherlock Holmes on the big screen, transforming him to the scroungy, intense Robert Downey Jr. who plays Holmes as a sarcastic ruffian who earns supplemental income as a warehouse pugilist, and Jude Law as a sophisticated and alarmingly violent Watson.

The result is a highly entertaining, visually stunning movie that doesn’t quite fire on all cylinders and reduces one of the best and most memorable fictional detectives in history to just another member of CSI:

Victorian London or one of the Usual Suspects or any number of similar gritty, tough, unorthodox detectives.

The story revolves around the malevolent Lord Blackwood (Mark Strong) seeking to take over the government of England and then restoring English dominance over America. A shadowy presence in the background is Holmes archenemy Professor Moriarty.

The film opens with a horse-drawn paddywagon galloping madly through the streets of a dirty, sepia London in a scene reminiscent of Harry Potter and the Half-Blood Prince. Cut to Holmes and Watson ignoring Scotland Yard Inspector Lestrade (satisfyingly played as a bit of a simpleton by Eddie Marsan) and sneaking into a ritual during which Blackwood is sacrificing a woman tied to a stone altar. They rescue her in the nick of time and Blackwood is sentenced to hang, but …

The dialog is amusing and the repartee between Holmes and Watson is entertaining, but also contributed towards the sense of this as just another buddy cop film: In the stories, Watson is primarily Holmes’ chronicler, his “Boswell,” rather than an action figure with flying fists.

Doyle introduces Irene Adler in the Holmes stories thusly: “she eclipses and predominates the whole of her sex. It was not that [Holmes] felt any emotion akin to love for Irene Adler, however.” Ritchie decided that this doesn’t work in a modern action movie, so when Adler (Rachel McAdams) shows up unexpectedly, Holmes has to hide her portrait and it’s clear he is indeed in love. At one point it’s also suggested that the relationship is consummated, even if as part of Adler’s evil plot against Holmes.

The exterior shots of Victorian London, the climactic fight between Blackwood, Holmes and Adler on the half-built Tower Bridge, and the many complex interior shots are beautifully done. The fight scene at the shipyard is a standout in terms of seamless integration of CG backgrounds and details.

Overall, the cinematography by Philippe Rousselot is stunning and worth the ticket price.

Then again, the unrelieved sepia color palette left me yearning for some splash of color from a costume, a painting on the wall, or anything. Even the flower bouquet in a later hospital scene was white lilies.

Sherlock Holmes is a fun action detective movie based loosely on the great fictional detective, but ultimately, it’s forgettable, yet another stylish action movie by a cast we’ve seen in these roles before, in a setting and era that’s a mainstay of modern cinema. Ritchie doesn’t bring much to the Holmes canon and Robert Downey Jr. often seems to be reprising his role as Tony Stark in Iron Man.

See it in the theater for the cinematography and flawless production, but don’t expect it to be a reinvention of Mr. Holmes because it’s not.