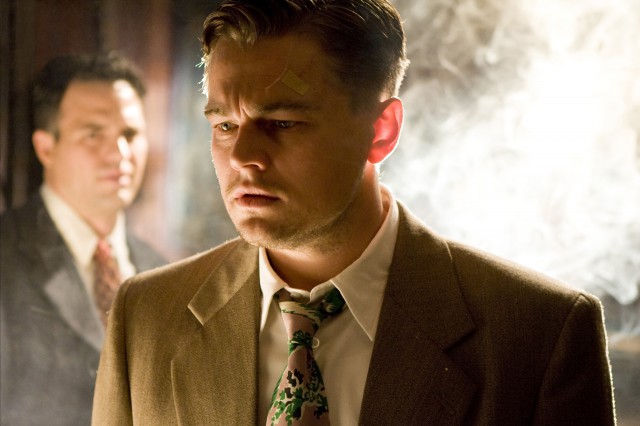 “” marks fourth collaboration with director . It may also be his most intense, which says a lot when you consider that their previous three films were “Gangs of ,” “The Aviator” and “The Departed.”

The movie, which opens Friday, is based on novel and is set in 1954, when U.S. Marshal (DiCaprio) and his partner Chuck () investigate the disappearance of a patient at a hospital for the criminally insane located on a remote island.

With a hurricane bearing down, an uncooperative doctor () who seems to be hiding something and a population of murderers and rapists,
ranks high on the list of the world’s worst places to visit. But
Scorsese’s superb and imaginative direction, along with DiCaprio’s
ferocious performance as the frustrated detective, is cause for film
buffs to celebrate.

spoke briefly with DiCaprio from about the making of “” and his continuing relationship with Scorsese, which keeps bearing career-high work from the actor.

Q: “” is a
difficult movie to write about, because so much of the story hinges on
information the audience doesn’t learn until the last few minutes. But
it didn’t seem like Scorsese went out of his way to trick viewers or
try to keep them from figuring out what was going on. There’s no big
‘Gotcha!’ moment or anything like that. Instead of going for a” Sixth
Sense” kind of thing, the film stays true to the experience of your
character and what he’s going through.

A: That’s right. The sheer nature of the narrative
was extremely complex and a kind of balancing act. Teddy has a very
complicated past, and the whole movie deals with his memories, which
can also be interpreted as dreams. Scorsese wanted to emphasize a layer
of ambiguity with the character and the storyline. I don’t think he
wanted it to be a gimmicky ending or one of those popcorn reveals.

Q: The story also takes you to an incredibly dark place that I had never seen depicted in a movie quite in this manner.

A: What struck me about doing this character and
this story as a whole is how incredibly emotional it was and how much
it explored the dark side of humanity. At the end of the day, this
movie is really a character piece. All of the genre stuff — the Gothic
horror and thriller aspects of it — sort of dissolve away as you get
down to the core of the movie, which is human trauma and the ability to
recover from that. Or not.

Q: When I first heard Scorsese was going to direct” ,” I imagined it would be something like” ” — one of his just-for-the-fun-of-it movies, a sort of top-notch thriller that would be fun to watch. But” ” turns out to be pretty harrowing and deadly serious. It’s not minor Scorsese at all.

A: I know what you mean. I wasn’t even prepared for
it when I watched it as an audience member. That’s the great thing
about working with a director like ,
because it’s never just going to be about sticking to a particular
genre. He’s a true artist in every sense of the word. You do get that
entertainment value, but at the end of the day I think “”
is in line with the type of movies he does best. I’m not comparing it
to his past, brilliant works, because those are some of the best movies
of all time. But when you think of “King of Comedy” or “Taxi Driver,”
this one is also about a troubled character and exploring their
darkness in a way that is sometimes uncomfortable to watch.

Q: A lot of directors with careers as long as
Scorsese’s tend to peak at a certain point, and then their films start
showing the director’s age. But Scorsese is still experimenting and
trying new things at 67. There’s a long shot in this movie that pans
from left to right as a group of Nazi prisoners is being executed that
made my jaw drop. It’s a beautifully directed movie.

A: He’s constantly pushing himself, even though he’s
made so many movies. A part of me is regretful in some sense, because
I’m so focused on what I have to do when I’m working with him that I
don’t get a chance at all to hang out on the sidelines and watch his
process. A lot of that experience — being able to watch at work — is diminished by the process of having to concentrate on my job. That’s just the nature of it.

Q: You’ve worked with an impressive roster of directors — , , . How is Scorsese different?

A: It’s hard to explain his process. There’s nothing
distinctive about the way Scorsese directs that is much different or
far superior to other directors of his caliber. But there’s an
undercurrent to what he’s doing that’s almost intangible. You can’t put
your finger on it. It’s the way he deals with his actors, the way he
edits small little moments and holds them, the way he’ll push in with
the camera in a way that’s almost undetectable. And then when you see
all the pieces of the puzzle, they make a beautiful tapestry. He’s
working on so many different levels simultaneously.

The one thing I can say with absolute clarity that
is definitive about him is that he gives the actor complete authority
with your character — lets you take responsibility. Even if you go off
in a different direction that he doesn’t feel is right for the film,
he’ll let you go there and discover that for yourself, because he
expects his actors to ultimately help him with the movie he’s trying to
make. He explores the movie through his actors, and that’s amazing. And
kind of rare.

Q: You’ve played some fairly intense characters in
Scorsese’s movies. How has that experience affected your approach to
acting as a whole? Do you work differently now or look for different
things in scripts than you did before?

A: One thing I’ve learned is to be open to
discovering the character as you are making the film. Scorsese and I
both came into this film knowing very much what the genre was and what
kind of film we were making stylistically. But we didn’t really
understand what emotional depths we needed to go until we were on the
set that day. There was a scene in the script that was very simply
described, and it wasn’t until we were getting ready to shoot it that I
said “Wow, this is actually the most important moment in the entire
movie!” And Marty said “Yep, it is.” And I realized on the spot that I
would really need to push it. I can’t talk specifically about what that
scene is, because it gives away too much of the movie. But that whole
sequence by the lake is some of the most intense work I have ever done
in my LIFE.