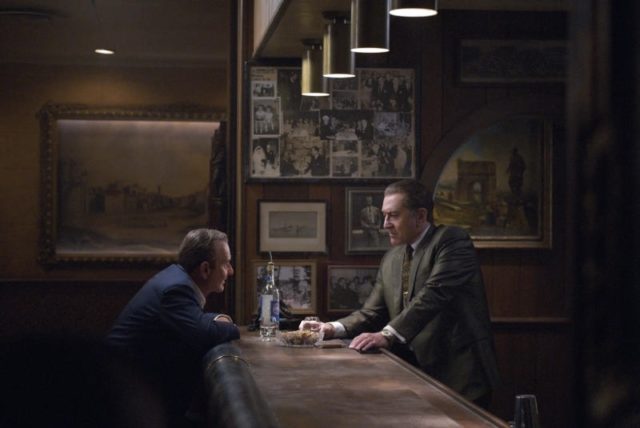 The Irishman begins in darkness. A small box of light at the center of the frame opens like an iris, and we see nurses and doctors. It looks like a hospital, but this is no beginning; this is the end: A nursing home, somewhere in Philadelphia, at the twilight of the 20th century. On the soundtrack, “In the Still of the Night,” written by Fred Parris and performed by The Five Satins. Fittingly, the song’s title has a parenthetical: (I’ll Remember), and what follows is memory and mourning from one of the nursing home’s residents: Frank Sheeran (Robert De Niro), the titular Irishman.

Based on Charles Brandt’s 2004 nonfiction novel, I Heard You Paint Houses, The Irishman is filmmaker Martin Scorsese’s 25th feature film. Hopefully, it’s not his last, though it feels like it could be for its entire 210-minute runtime.

Back on familiar ground, The Irishman finds Scorsese with gangsters — the same who brought him fame with Mean Streets, Goodfellas and Casino. Like those three, The Irishman shows how easily people come to believe they control things. And how hard reality hits when they realize they don’t. Labor union leader Jimmy Hoffa (Al Pacino) thinks he runs the world, but he’s still small potatoes next to Russell Bufalino (Joe Pesci). But even Bufalino has to answer to someone. Sheeran isn’t smart — a little slow on the uptake, stutters when nervous, and squints hard when trying to understand above his pay grade — but he’s wise enough to know who to hitch your cart to and when.

Like Scorsese’s previous pictures, details give the story texture, and rituals provide access to a world of codes. What elevates The Irishman from those other movies is an acceptance of finality. Not a fear of death, but a realization: When you play this game, you rarely play for long.

Mean Streets shows how easy it is to fall into this world, Goodfellas makes it look fun, and Casino makes it extravagant. There is nothing easy, fun or extravagant about The Irishman. Yes, there are fun moments — Pacino’s Hoffa is inspired — and there is a good bit of humor, but The Irishman is not here to glorify the past. It’s here to lament it, eulogize it and, most importantly, atone for it. It’s a ghost story populated by characters who don’t know they’re dead: Freeze frames and title cards tell who someone is, how they were killed, and on what date. It’s harsh. And fitting. Running with these guys comes with an expiration date.

It’s a technique Scorsese could have used in any of his films, but it works best here, and it works best now. The camera is stiller, the music quieter. It’s not as intoxicating as his earlier movies, and it doesn’t want to be. Those were the movies of a young man intoxicated by the 20th century. That’s not the case here, and the final 30 minutes of The Irishman is a denouement decades in the making. It works on every possible level. And it’s unbelievably moving.

ON THE BILL: The Irishman on Netflix Nov. 27.