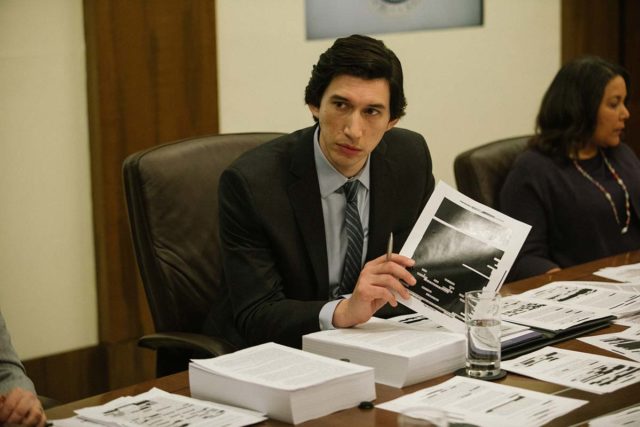 The first: Daniel Jones (Adam Driver), a Senate staffer working for Sen. Dianne Feinstein (Annette Bening) tasked with investigating the CIA’s interrogation tactics. Jones was on his second day of graduate work at Harvard when the towers fell. The following day, he switched his studies to national security.

These tactics — from humiliation to sleep deprivation and starvation — are now widely known and condemned. But the one that drew the most criticism, waterboarding, became the linchpin in the torture versus interrogation argument. Vice President Dick Cheney believes in the latter, Jones formidably in the former.

For years, Jones locks himself away in a small bunker investigating Mitchell’s EITs. He starts with a team of six. Then three. Then two. The rest have lives, job opportunities and families. Jones does not. There is a wisp of a former life when attorney Cyrus Clifford (Corey Stoll) attempts to construct a background, but that life is long gone. All that remains for Jones is the torture report.

Written and directed by Burns, The Report is a swiftly moving narrative that hops easily from Jones working on the report (2002-14) to Mitchell’s reign at CIA black sites (2002-09). Separated by time and space, these two stories run parallel and illustrate two men doing their duty to the utmost of their ability.

The conflict of The Report lies in neither Jones’ nor Mitchell’s actions, but in Washington’s inability to either accept or act. The Bush White House may be the perpetrators, but the Obama administration does little to right the ship. Obama’s Chief of Staff Denis McDonough (Jon Hamm) fears a partisan backlash while many senators worry that condemning the CIA will hurt their chances at re-election.

So it goes in the most powerful nation on the planet, with Jones stuck in the middle. His desire to release the information publicly complicates matters. If he leaked the report, would he walk free with Daniel Ellsberg? Or would he be sent to prison with Chelsea Manning? Or live in exile with Edward Snowden?

The Report asks the question but skirts the answer. Well acted and tightly constructed, The Report is a gripping piece of work until it falters in the finale. Using archival footage of Sen. John McCain’s 2014 speech from the Senate floor, the movie cuts to the faces of players as they stare pensively out windows and across their desks with soft piano music playing in the background.

Considering where we are in 2019, it’s hard to ask The Report for resolution. But a forced happy ending somehow seems worse.

ON THE BILL: The Report, now playing on Amazon Prime.