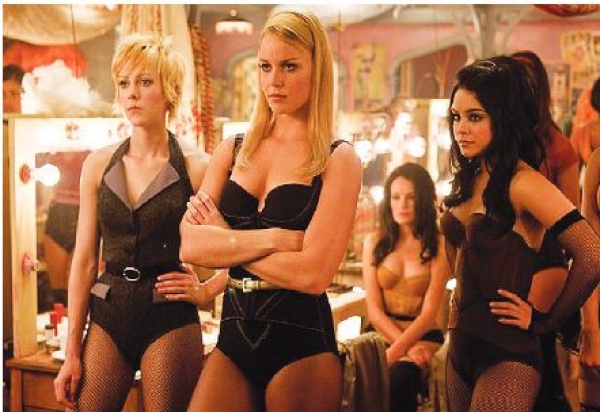 Imagine a building where one side is a dark, dreary insane asylum populated by sadistic guards, doctors and attractive female inmates, and the other side is a popular brothel and speakeasy. Sounds like the heart of a B-movie exploitation film, and that’s what Sucker Punch, the new computer graphics-filled cinematic graphic novel from Zack Snyder, turns out to be.

Sucker Punch starts out with a dark, moody sequence where late-teen blonde waif Baby Doll (Emily Browning) is trapped in a gothic monstrosity of a house with her scary, leering stepfather (Gerard Plunkett). When she rejects his advances after her mom has passed away, he turns his attentions to her little sister, to which Baby reacts by finding a gun and shooting him. She misfires and her sister ends up killed and his revenge is to have her locked up in the home for the mentally insane.

The fantastic visuals come from Baby Doll trying to escape the harsh reality of her new existence: she is extolled by the ambiguous Russian psychiatrist/ madam Dr. Gorski (Carla Gugino) that “you create your own reality,” and so encounters the Wise Man (Scott Glenn, who was awful in this role) in a strange Last Airbender-inspired Japanese temple that her fevered imagination creates. He explains to her that she needs five things to be able to escape the hell of her existence.

Even in this first fantasy sequence, however, it’s mostly a video gamer’s wet dream, where 20-foot monster samurai use Gatling guns and rocket launchers to try and defeat Baby Doll. Every gunshot is lovingly shown, every footstep shakes the theater, and when Baby Doll leaps through the air and kills an enemy mid-leap with her katana, she lands in a crouch, sword up, and we can see — and feel — the shock wave of her energy. Subsequent fantasy sequences incorporate her posse of fellow girls, all similarly dressed in what are best described as skanky Halloween costumes.

Subsequent sequences take place in a sort of stylized World War II trench where German soldiers have been reanimated by the Nazis and are now steam-punk zombies. Later, the girls fly an armed military chopper to a castle teeming with demons and guarded by an angry dragon. The last fantasy sequence moves to a more futuristic world where, a la Under Siege, Baby Doll and her gang fight through a train of bad guys to disarm a bomb.