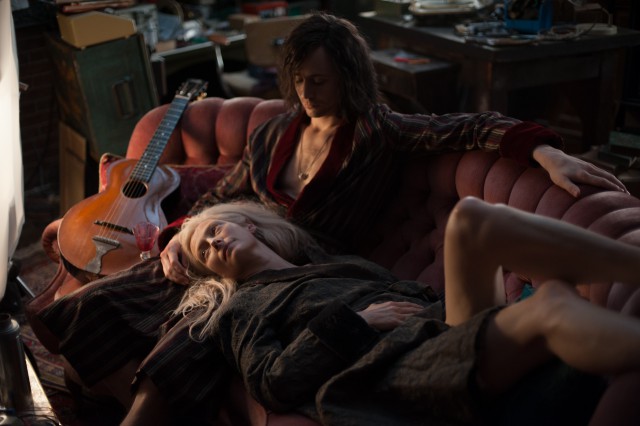 It’s amazing how popularity can change perception. When Stephanie Meyer’s 2005 novel, Twilight, cracked The New York Times bestseller list, vampires were brought back into the mainstream in a big way. Beginning in 2008, Meyer’s series was adapted into five movies and followed closely by HBO’s True Blood (also 2008) and CW’s The Vampire Diaries (2009). Vampires became a cash cow, but YouTube videos, TV shows and movies parodied the immortal bloodsuckers to diminishing returns.

Which is why it was such a shock when writer/director Jim Jarmusch announced that he, too, was making a vampire movie. One of the hippest directors around, Jarmusch isn’t one for the mainstream or shifts in pop culture. Instead, Jarmusch favors personal projects. Visually baroque movies that capture dilapidation with a quiet beauty while characters coolly muse about humanity. Turns out, those bloodsuckers were right up his alley.

Jarmusch’s latest, Only Lovers Left Alive, playing at The Boe Oct. 28 to Nov. 1, observes the decay of culture and society not from within, but from without. The lovers of the title, Adam (Tom Hiddleston) and Eve (Tilda Swinton) have been married for centuries but now live apart, he in Detroit, she in Tangiers.  Adam is depressed and ready to end his eternal existence and Eve, sensing that something is amiss, heads for Detroit. They reunite, all is well for a spell, but then Eve’s younger sister, Ava (Mia Wasikowska), arrives and disrupts their Edenic existence.

That is about as much plot as Jarmusch needs to make a movie work. The rest is left up to Hiddleston and Swinton, and they pull it off. The two move and sway to the same silent symphony, and look good doing it.

Yet, what makes Lovers so excellent and unusual is the serious attention Jarmusch devotes to the trouble with being immortal. What would it take to survive as a 500-year-old vampire? How do you keep people from realizing that you never get old and never work? How does one travel without proper documents? How to obtain blood when humans have polluted their red blood cells with drugs, drink, prescription medication and GMOs? And then there is that little problem of never dying. What does one do while living forever? Eve reads, Adam rocks out, but mostly, they drift. Up and down the abandoned roads of Detroit and through the alleys of Tangiers, constantly burning time that for them will never end.

At first glance, Only Lovers Left Alive looks like an attempt to take back the vampire from tweens and Mormons squeamish about blood and sex. Maybe, but I don’t think that is Jarmusch’s end game. Jarmusch doesn’t seem interested in subverting the modern-day vampire genre, or trying to take it back from anyone. Instead, Only Lovers Left Alive is the bait for all those fertile young minds obsessed with sparkling vampires. Bait designed to draw them into the theater and show them what really good filmmaking has to offer. It might even open their minds to better music, better literature and better cinema. They will wonder, who is this Nikolas Tesla that Adam idolizes? What’s all this about Christopher Marlowe claiming to have written the works of Shakespeare? They might even seek out other movies from Jarmusch’s filmography. Maybe it’s the optimist in me, but I don’t see Only Lovers Left Alive as a giant middle finger to all those love-sickened, morose Bella and Edward wannabes. I think it’s Jarmusch’s invitation to those across the aisle: “Come on in, the water’s fine.”

Director Catherine Breillat leads viewers through her personal experiences with a con man who took nearly 700,000 euros from her as she was recovering from a stroke. Only 7:30 p.m. Nov. 2, IFS at Muenzinger Auditorium.

While artist Mark Landis does create his own paintings, he’s most famous for his forgeries, creating counterfeits from a wide range of painting styles and periods. But Landis has never been in it for the money. At Boedecker. — Boedecker Theater

AWAKE: THE LIFE OF YOGANANDA

The biography of the Hindu swami who brought yoga and meditation to the West. Author of the million-seller spiritual classic Autobiography of a Yogi, he made ancient Vedic teachings accessible to a modern audience. At the Dairy Center for the Arts. — Boedecker Theater

A couple grieving the recent death of their young daughter meet two elderly women in Venice, one of whom is psychic and brings a warning from beyond.

A cheesy monster movie with cheesy special effects. Also a mature cultural response to the nuclear nightmare occurring during its release. Only 7:30 p.m.

A young man’s recently deceased girlfriend mysteriously returns from the dead. However, he begins to realize that she is not as he remembered her. At Boedecker. — Boedecker Theater

LOVE AND TERROR ON THE HIGH PLAINS OF NOWHERE

Steven Haataja arrived for a teaching position at a Nebraska college in the summer of 2006. That winter, he disappeared without a trace. Months later, his body was found tied to a tree and burned beyond recognition. Filmmaker Dave Jannetta explores the mystery through the eyes of author Poe Ballantine, who spent six years investigating the case. At Boedecker. — Boedecker Theater

second novel. He feels pushed out of his city by the constant crowds and noise, a deteriorating relationship with his girlfriend and his own indifference to promoting the novel. When Philip’s idol offers his isolated summer home as a refuge, Philip finally gets the peace and quiet to focus on his favorite subject: himself. At Boedecker. — Boedecker Theater

MOVING FROM EMPTINESS: THE LIFE AND ART OF A ZEN DUDE

Zen calligraphic painter Alok Hsu Kwang-han helps students explore the silent space inside us all where creativity comes from by teaching his students to get out of their own way so that “creativity happens on its own.” At Boedecker. — Boedecker Theater

The story of two people who, in the twilight of their lives, discover it’s never too late to love. Peter Travers, film critic for Rolling Stone, will moderate a live telecast with the movie’s star Shirley MacLaine. At Boedecker. — Boedecker Theater

An opera by Giuseppe Verdi, based on Alexandre Dumas’ first play. Sung in Italian. At Boedecker. — Boedecker Theater