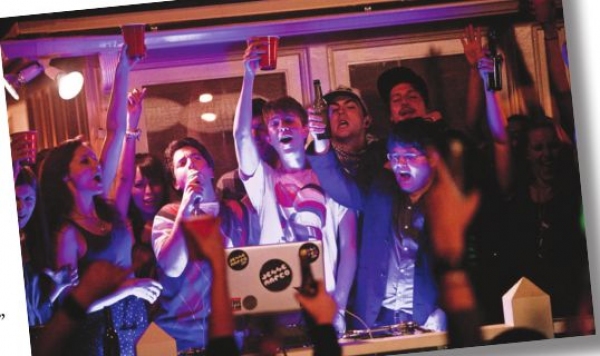 Project X is the movie equivalent of that good-looking, well-off teenage boy your gut tells you to keep away from your teenage daughter.

Something sets off the warning bells — that he has lost his mind to his hormones, that he objectifies women in the worst way, that he’s too casual with the homophobic slurs.

That doesn’t really describe Thomas (Thomas Mann), the gawky upper middle-class teen in this Hangover for high schoolers. But it nails his pal Costa (Oliver Cooper, in the Jonah Hill role). Costa is a blustering transplanted New Yorker who eggs on Thomas as they plan a parents-out-of-town birthday party, mocks their mutual “fat little Rain Man” pal J.B. ( Jonathan Daniel Brown) and is hell-bent on turning this North Pasadena fete into an epic party that will be the “game changer” for their social status, lift them into their high school’s elite and give them access to sex with the school hotties.

And no list of warnings — “Do not go into my office. The pool heater? Don’t touch it.” — from Thomas’ colorless dad (Peter Mackenzie) can steer the boys from their collision course with destiny.

Things only start to go wrong when they rip off Costa’s well-armed, disturbed drug dealer. Costa has blasted the invitations all over social media, so the socially anonymous Thomas will be hosting hordes of “randoms,” peers who don’t know he exists. Not to worry, though. Costa has hired a team of middle schoolers led by Tyler (Nick Nervies, hilarious).

Naturally, Thomas must pursue the hottest girl in school, who is utterly compliant. Naturally, his gorgeous longtime pal Kirby (Kirby Bliss Blanton), the only woman given even a hint of personality, is hurt by this.

This Todd (Hangover) Phillips production produces its share of explosive laughs, mostly of the “Oh my God” variety. Excess — the treehouse turned into a beer dispensary, hoses run to ground level where gravity and volume produce a lung full of suds for every underage imbiber — passes for humor here.

It’s a wearying “romp,” from its tired “lose our virginity” formula (worn out even when Superbad used it) to the conceit of making this a “birthday” mockumentary, ostensibly filmed by the goth video nerd Dax (Dax Flame). Director Nima Nourizadeh loses track of that for long stretches of impossible-for-Daxto-get angles and edits.

Project X is more politically incorrect than hateful, even if it is just shy of Girls Gone Wild in its sexism. Clueless boys in its target audience may mistake it for a date movie. Now. But just you wait, kids. X is that beau who sets off warning bells when he’s there to date your little girl. You won’t want to let her out the door with this creep.