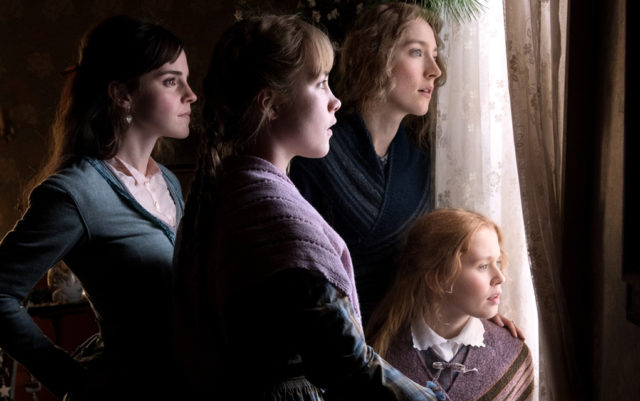 A few moments earlier, she was in excruciating pain: Another pie-eyed scribbler stranded on the non-editorial side of the desk. Too shy to admit the truth, Jo (Saoirse Ronan) claims the story is a creation of her friend, but Mr. Dashwood (Tracy Letts), the editor, can see her ink-stained fingers from here. He chuckles as he reads, turns pages over and stabs them down on the desk with a tremendous thunk, and scratches out paragraphs whole. He’ll buy it, he says, with the edits of course. Jo asks if he might be interested in more stories. Yes, he responds: “But if your main character is a girl, make sure she is married by the end. Or dead. Either way.”

Written for the screen and directed by Greta Gerwig, Little Women is a playful twist on that “either way.” It’s a faithful adaptation of Louisa May Alcott’s beloved novel with a nod to autobiographical elements. The publishing company Dashwood works for is the Boston-based Roberts Brothers — the publishers of Little Women in 1868 and ’69. Jo’ll return to Dashwood in due course, but now she runs happy and free — a writer with cash in hand.

And run she does — smiling broadly as her long, curly hair clings to her skull for dear life. She is joy incarnate, and the cinematography (Yorick Le Saux) and cutting (Nick Houy) can barely keep up.

Few books in the American canon are as beloved as Little Women, or as adapted. Gerwig’s version marks the eighth time the March sisters have graced the silver screen, and each iteration bears the mark of its time. It’s what makes returning to this material so enjoyable decade after decade — each version finds something else in Alcott’s story echoed in the present day. For Gerwig, it’s four sisters, similar but different, trying to find their way in an America trying to find its footing. “I’ve had a lot of troubles,” wrote Alcott, “so I write jolly tales.”

Everything here feels present tense. The obstacles Jo, Meg, Amy and Beth face are easily extrapolated to today. As are the answers Aunt March and Laurie offer. The 1860s were troubled times in America — so are the 2010s for that matter — but when the March sisters find their place in this world, they do so not by concession, but by compromise.

“No one will forget Jo March,” she declares defiantly.

“I can believe it,” the man sitting opposite says. He is her confidant, but not yet her lover. She’s a writer, but not yet an author. By journeys end, they’ll be both. Or dead. Either way.