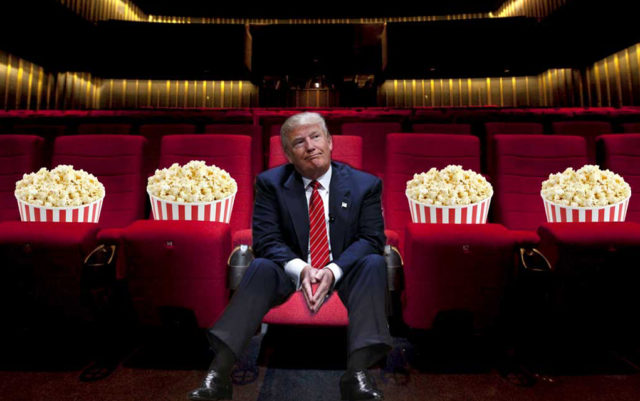 Who is Mnuchin, other than a man whose last name desperately needs to buy a vowel? In a statement obviously written by a staffer with more self-control over adjective use than the president-elect, and an attention span that exceeds 140 characters, Donald Trump declared “Steve Mnuchin is a world-class financier, banker and businessman.” He was a partner at Goldman Sachs and currently runs a hedge fund. Oh, and he also produces movies. In fact, the statement regarding Mnuchin’s appointment could read: “Guy who produced Suicide Squad now oversees the U.S. Economy.” Cool?

Mike Pence may have gotten razzed by the cast of Hamilton, but Mnuchin should have been demonically possessed by the spectre of the actual Hamilton. Whether it’s this literal appointment of a Hollywood exec inside Trump’s clueless cabinet or the Moron Don’s rabid obsession over his TV footprint, we are on the precipice of a new era. The divide between pop culture and the presidency is no more. The wall dividing the two is as transparent and imaginary as the Mexican one that Trump used to snake-oil his way to the GOP nomination.

Thus, beneath this new umbrella, it’s time to consider what movies could (and should) look like under, gulp, President Donald Trump.

Unlike print, sound or stage, the path to a big screen release is typically lengthy. Sure, there are exceptions, like the micro-budgeted-indie flick or the project-in-the-pipeline that is tinkered with and tailored to reflect current attitudes. But, as a general rule, artists who work in the medium of film aren’t as able to quickly react and respond to cultural stimuli as others who only need pen, canvas or safe space to present their message.

Take something like Sept. 11. Although part of the delay in cinematic reaction was an exercise in sensitivity, somewhat overly so, much of it was simply owed to the nature of the beast. Preproduction and financing can be exhaustive, maddeningly long endeavors. This explains why even something like United 93, which merely directly recounted the events of that September day, took nearly half a decade to see the light of day itself. Big, tentpole films, like Spielberg’s War of the Worlds, didn’t truly begin even thematically tracing the terror of the Bush era until 2005. Large-scale targeted, intentional deconstruction and argumentation as articulated through cinema took years to manifest in a significant way.

Obviously, Michael Moore in TrumpLand proved that documentaries are likely to be the first-line reactions, a by-product of their ability to be partly Frankenstein’s-monstered out of real-world footage. But direct narrative film reactions to the election of Trump are going to be slow. Instead, it’s more likely that existing movies will be placed in context of his impending presidency. Take something like Star Wars: Rogue One. The anti-fascist, rebellious rhetoric can be applied to the incoming leaders of government as comfortably as Trump would fit inside Darth Vader’s helmet. Only his helmet, though; the rest would take some squeezing and greasing. That movie was actually on the receiving end of a boycott initiated by white supremacists, who do not get to choose their own nicknames, no matter how adorably insipid “alt-right” sounds. Speaking of adorably insipid, a boycott of one of the most popular franchises in the history of ever, produced by a globally dominant megacorporation, went about as well as you’d expect.

That said, what happened with Rogue One is probably the best indicator of the immediate future: Critics and capable audiences will attempt to endow or imbue liberation messages or anti-fascist, anti-hate dogma into unrelated movies while rabid anti-intellectuals get pissy and whine about it.

Do You Have a Clue What Happens Now?

Although by many accounts, Trump is likely to shrink or reduce American output in most areas, he almost certainly has an uncanny ability to produce anger. Thus, about two years from now, the first wave of movies creatively birthed in the wake of President Baby Hands will emerge. There will be the obligatory obvious satire, which Sacha Baron Cohen should legally be prohibited from creating. A few foreign films will take their jabs, casting Trump-a-likes as their fictional U.S. presidents. A light sci-fi film will likely extrapolate draconian measures against tolerance that are now frighteningly possible.

None of that is really new. The ripples of presidential elections are always eventually felt. Mind you, the halcyon days of watching a melodramatic reenactment of Michelle and Barack Obama’s courtship are now long behind us. The real difference will be in the reaction. Donald Trump has already blasted a steelworker’s union leader, Chuck Jones, on Twitter for daring to publicly correct him. He has ranted about Alec Baldwin’s impression of him on Saturday Night Live. There is absolutely, positively zero chance that President Trump will be able to let go a film that targets him directly.

In fact, it’s worth asking if he will intercede before that even happens. The fear of governmental censorship is real when the president-elect explicitly suggests a desire to control the media. This is a man with vast connections in Hollywood — look no further than Treasury Secretary Suicide Squad. Is it possible he may strong-arm studios into reconsidering funding for projects highly critical of him? A-doy. Yeah, it’s possible, especially considering that the very people who bankroll most of the movies you love are Wall Street sycophants whose mouths barely leave the teat of tax influence.

Those of us who consider this medium a vital social battleground must remain vigilant. Those deals announced in trade magazines about the film industry suddenly warrant that much more scrutiny. This is a man whose mouthpieces have used FDR’s internment camps as a precedent for proposed roundups of Muslim Americans. There isn’t just a small chance the White House will begin directly meddling in Hollywood’s creative process, there’s a legitimate certainty.

You’re on Your Own

There’s another element of all this. Artists who work in movies have a responsibility now. They have a cultural charge made evident by the nigh-impossible amount of votes an orange pinata filled with insecurity and a hatred of women received. At least half of Americans have a hate problem. They are either blatantly intolerant or willfully able to forgive intolerance. A lack of empathy can be effectively countered through art. The burden on all genres, but especially this country’s most popular artistic medium, is to find a way to erode this lack of compassion. It won’t happen through policy or only through uncomfortable conversations at family gatherings. Emotional education through film is the most potent and capable fix to a problem most straight white people didn’t realize was this bad.

There’s a burden on the audience too, however. Take something like Moonlight. Here is a film that lyrically and deftly permits insight into the life of a gay black man living in a drug-laden environment. See it. See it and take a friend. See it and take a friend who may not otherwise realize what it feels like to experience that reality. Even those who are already bent toward compassion can use further, deeper education. Moonlight is exuberant and powerful and available right now. There are others like it. There will be others like it. Find them. Share them.

That’s what non-filmmakers can do. Just as we are asking and tasking those with creative opportunity to answer the call, we need to answer when they call. We need to not only attend movies like Kelly Reichardt’s Certain Women, a beautifully feminist film that illuminates without bending to explicit didacticism, we need to promote and share them. The challenge for those furious at Trump’s election has been “what can we do?” The answer is decidedly not simple, and it is certainly not only doing one thing. A combination, however, could be transformative.

Social media outbursts are understandable and potentially effective. Supporting or opposing legislation, railing against political appointments and participating in every election possible is crucial. But so too are those things that may begin to fray the edges of isolation, intolerance and anger that allowed a disingenuous huckster to con half the country into supporting him in exchange for a few magic beans… a few racist, sexist magic beans. Share and celebrate all meaningful art designed to liberate, but especially this most immersive and popular form, in an effort to enlighten. Demand more diversity in film and, by God, support it when it arrives.

Movies will survive Trump, provided the nuclear button requires adult-sized hands. Whether or not they can help us grow despite him, whether they can help us make sure this was a tipping point and wake-up call, that’s up to us.