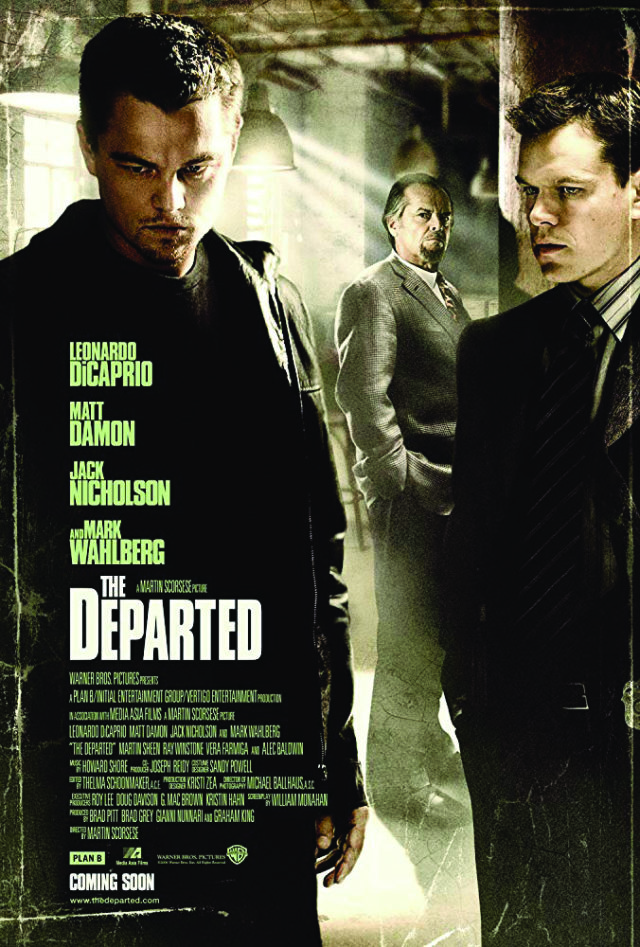 The timing couldn’t be better. The Alamo Drafthouse’s series, Hot Takes & Remakes, is a bizarre and beautiful collection of 30ish movies — some revered, some despised, all worth a second look. And if you haven’t given Martin Scorsese’s 2006 Boston cops and criminals epic The Departed, a second look, then what better day than St. Pat’s?

Steeped in Catholic guilt and shifting loyalties, The Departed is a remake of the modern Chinese classic, Andrew Lau’s Infernal Affairs.

Set among the crime-infested hallways of the Boston Police Department, and the police-populated dens of Frank Costello (Jack Nicholson), The Departed is both a tour de force of performance and cinematic style. Leonardo DiCaprio, Matt Damon and Vera Farmiga shine, but Mark Wahlberg and Jack Nicholson steal the show — relishing every last eraaa, araaa and Bah-ston ladened syllable. Scorsese re-teams with cinematographer extraordinaire Michael Ballhaus and long-time editor Thelma Schoonmaker to fashion an apotheosis of sorts for the gangster genre. How fitting that he made it at Warner Bros., the studio that gave birth to snappy dressed, wise-cracking gangsters.

Both the Alamo Drafthouse Westminster and Littleton will be serving dinner during the St. Patrick’s Day screening: cannolis, ham sandwiches, corned beef and cabbage alongside a couple of frosty beverages.

What to watch for: In the 1932 film, Scarface, director Howard Hawks populated the frame with Xs and crosses anytime a gangster gets his. It made such an impression on a young Scorsese, he cribbed the technique 70-plus years later and it helped earn him an Academy Award. His first, and long overdue.