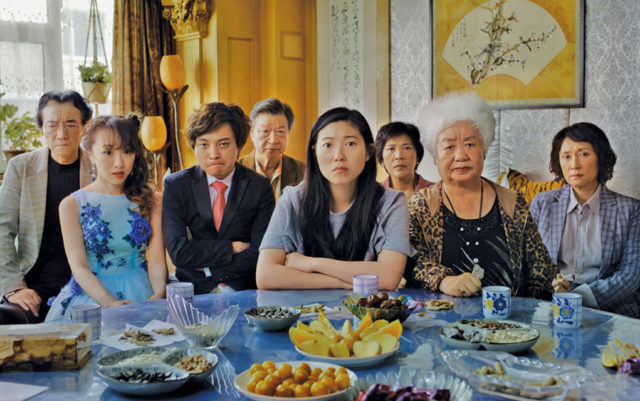 Billi (Awkwafina) has come home to China. Specifically Changchun — a city she left at the age of 6, when her father relocated his wife and daughter to the U.S. in search of a better life and more opportunity. That was 25 years ago, and there is nothing about Changchun Billi recognizes anymore. Towering Las Vegas-style high-rises and construction cranes pock the sky; neon signs of multi-national chains line the streets. Gone is the China Billi once knew, including the garden behind her grandmother’s home; leveled and replaced with a colorful arch, a piece of public art that will no doubt anchor another shopping mall. Erasure through consumerism isn’t a fate reserved strictly for Americans.

Cancer brings Billi here, her grandmother’s. Nai Nai (Zhao Shuzen) is in her 80s and treatment is not an option. She only has a few months to live; only Nai Nai doesn’t know it. Keeping with Chinese custom, Nai Nai’s doctor and sister conspire to keep the death sentence from her. They tell her she is in good health and send her home. The sister puts out the call to the family, and they all return to China under the ruse of a wedding — Billi’s cousin and his girlfriend of three months — the perfect cover for everyone to say goodbye without dragging Nai Nai’s spirits down.

There is an interesting connection between Nai Nai’s cancer and a China in transition, but it’s not a connection writer/director Lulu Wang belabors. It’s simply there, part of the canvas on which Wang paints her personal story, The Farewell.

Wang’s focus is on Nai Nai and Billi — one life ending and another life waiting to begin. She beautifully contrasts Billi’s dour depression with Nai Nai’s high spirits. Nai Nai takes the stairs when she can, exercises exuberantly and sports a smile in practically every scene. Billi solemnly hunches forward with the weight of inevitability on her shoulders. She looks like she might burst into tears at any minute and not be able to stop. As does the rest of the family, but it is imperative not to tip Nai Nai off, less she becomes despondent and depressed.

Hence, The Farewell’s central question: What good comes of a truth that hurts? Billi takes the American stance: Nai Nai should know, and that knowledge will inform her actions. But Billi learns that truth is far from comforting and doesn’t always set you free. Halfway through, you start to wonder if she would like someone to lie to her, if for no other reason than to make her feel better.

All this talk of death and lies might lead you to believe The Farewell is a dour affair. It’s not; the movie is lighthearted, lovely and joyous. Weaving each scene with genuine humor and everyday beauty, Wang turns the stickier parts of life into an uplifting catharsis. All movies are constructs, and thus movies are lies in one form or another. But The Farewell is one of the truest and most beautiful lies you will see this year.