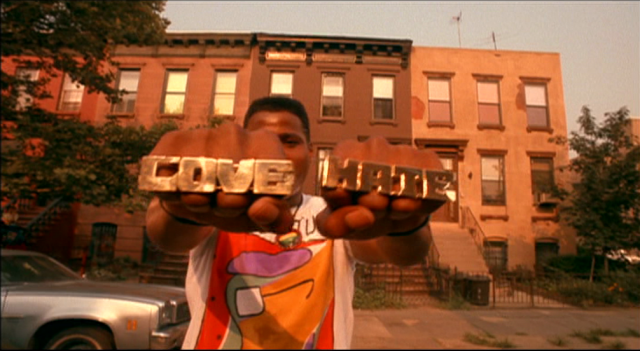 40 Acres and a Mule Filmworks

On Nov. 15, the Starz Denver Film Festival will screen a 35mm revival of Spike Lee’s Do the Right Thing, a movie that is as relevant today as when it debuted in 1989. This past summer’s headlines out of Ferguson, Missouri, and the death of Eric Garner in New York, make it clear that the events the film depicts on a hot summer day in Brooklyn in 1989 remain a sad, cruel reality for many black men in 2014.

The film was Lee’s third feature and is quite possibly his best. Lee writes, produces, directs and acts in this stylish tour de force about a NYC neighborhood where blacks, Puerto Ricans and Koreans live in tedious resentment under the constantly suspecting eyes of a white police force.

Even though the racial makeup of the block is black and Puerto Rican, its two businesses are run by Sal (Danny Aiello) and a Korean couple (Steve Park & Ginny Yang): a pizzeria and a grocery story respectively. Sal’s Famous Pizzeria has been there for years — before the demographic of the neighborhood shifted — and Sal is more than happy to take their money and smile at their ladies, but there is no way he’s putting a picture of a brother on his wall of heroes. That is where Sinatra, DiMaggio and Pacino belong, and if Buggin’ Out (Giancarlo Esposito) doesn’t like it, he can open his own pizzeria.

Also populating the block: Da Mayor (Ossie Davis) and Mother Sister (Ruby Dee), the busybodies of the neighborhood; Mookie (Lee), Sal’s pizza delivery boy; and the loudest, the proudest, the articulate and aggressive, Radio Raheem (Bill Nunn). With his boom box turned up as loud as it will go, Raheem blasts Public Enemy’s “Fight the Power” on loop, bringing Robert Mitchum’s message of Right Hand/Left Hand to all who will listen, stating that in the end, love always wins.

What’s so impressive about Do the Right Thing is how Lee incorporates perspectives. When Raheem delivers his Right Hand/Left Hand speech, it is directly to the camera. When characters hurl racist remarks, they do it directly to the camera. When radio DJ Mister Señor Love Daddy (Samuel L. Jackson) calls for time, “Y’all take a chill!” he does it staring down the barrel of the lens. Lee places us firmly in these characters’ shoes and dares us to judge.

Do the Right Thing debuted at the Cannes Film Festival in May of 1989 and came out in theaters a little over a month later. At the time, there were a few (mainly middle-aged white men) who worried that it would invoke black audiences to riot. What they saw was a black mob destroying a pizzeria, not the atrocity that led to it.

The ending of Do the Right Thing remains one of the most powerful and complex endings in all of cinema. Lee ends his movie with two quotes, one from Dr. Martin Luther King, Jr. decrying violence, and one from Malcolm X, approving its use — when necessary. Do the Right Thing is a rare work of art that balances the contradictions that are a part of everyday life without feeling the need to reconcile them. To quote Walt Whitman, “Do I contradict myself? Very well, then I contradict myself, I am large, I contain multitudes.”