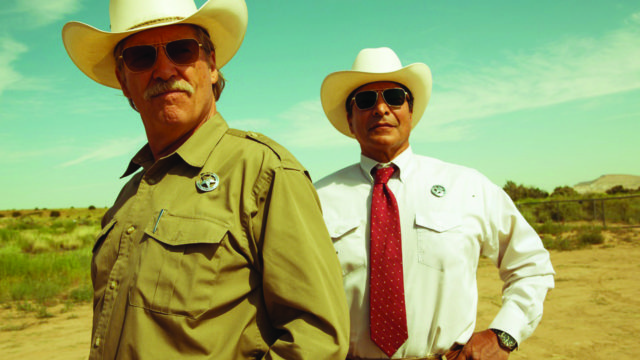 hen it comes to movie genres, none are as distinctly American as the Western and Film Noir. The Western, populated by cowboys, Native Americans and disappearing frontiers, went from dime story novels to popular kiddie fare to wrought psychology and complex guilt. Westerns document the spirit of America and the people who populate it, but they also tell the violent tales that brought America about. The Western is melancholic; the more it succeeds, the less it can survive. Law and order bury the past, and with the Western, that burial is one of violence.

But that violence couldn’t be confined to the frontier, and no matter how hard law and order tried to stifle it, the blood spilled out onto the rain-soaked streets of Film Noir. Here, the past was never buried and wouldn’t stay so if you tried. These men and women are doomed and they know it. But that isn’t enough to stop them from trying. A tiger can’t change its stripes anymore than these characters can change their wicked ways.

Both of these genres hail from the first half of the 20th Century, but they occasionally crop up in modern day cinema to great effect. And in Hell or High Water, they wrestle with one another with such astuteness that the film smacks of a past long gone, a present all too current and a future that seems inevitable.

The story is familiar: the Howard Brothers (Ben Foster and Chris Pine) take to robbing banks when their luck runs out and the child support piles up. Tracking them down is an aging Texas Ranger, Hamilton (Jeff Bridges), ready to start his retirement years, and his long suffering partner (Gil Birmingham), who is more than ready for Hamilton to hang up his spurs.

Director David Mitchell and screenwriter Taylor Sheridan give Hell or High Water a poignant touch by setting the action in West Texas; here, the West isn’t disappearing, it’s gone. Broken and ground into dust by corporations and the very banks the Howard Brothers rob.

Both in style and substance, Hell or High Water is an elegy for the West; all four of these men represent a class that was poor before the recession and poorer since. An entire way of life — the small town way of life — disappeared during those years. What resonates strongest is a simple fact: the America that few of us live in, but would love to know, will die with these small towns, never to return.

All four of the players know this, and not one of them is cut out for the 21st century. The romantic notion of going down in a blaze of glory is inexplicably tied to the relief of not having to confront the mystery of the future.

Hell or High Water confronts that notion head-on, exposing its falsity with surprising poignancy. A working knowledge of the history of cinema isn’t always necessary to understand and appreciate a movie, but it can help. Especially when the present is so heavily influenced by the past. In Hell or High Water, they’re practically the same.