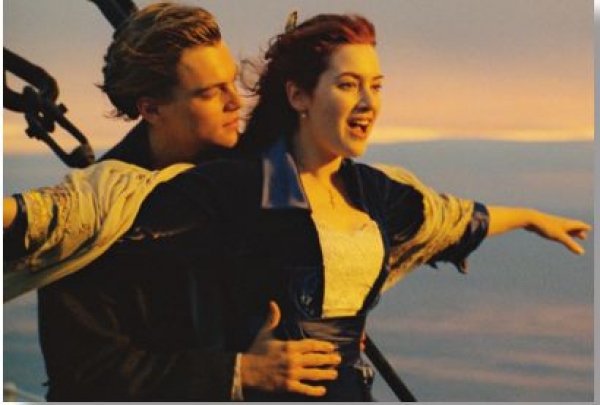 The RMS Titanic has resurfaced from the icy depths of the Atlantic only to be subjected to a second dunking, this time with a 3-D upcharge, under the stewardship of Capt. James Cameron, master and commander.

Cameron’s 1997 film — perhaps you’ve heard of it? — has returned to theaters as Titanic 3D on both regular and IMAX-sized screens, just in time for this month’s 100th anniversary of the doomed vessel’s maiden and farewell 1912 voyage. How’s the 3-D? It’s fine. It’s pretty good.

But it must be said: This is still a straight-up post-production 3-D conversion job, the sort of thing Cameron himself badmouthed (deservedly) after his own Avatar, which was shot in ground-up and genuinely immersive 3-D, made such a splash.

When the panic-on-the-Titanic romance starring Leonardo DiCaprio and Kate Winslet first came out, I caught it twice, thereby qualifying me for permanent 14-year-old girlhood. The picture remains the worst-written blockbuster I happily paid to see a second time.

Now. Why is this? Given the banality of so much of what is actually spoken on screen during the 194 minutes of Titanic, why does it work so well? Two reasons, I think.

One: Cameron is a genius at instilling narrative dread and designing a hokum-drenched fairy tale of a certain size. Line to line, his scripts are laden with eye-rollers. But he knows how to sustain an audience’s interest in the terrible things to come, be it a mass watery grave or genocidal slaughter on another planet.

Two: He knows when to shut up, or rather, shut his characters up, and simply dive into images. In Titanic, the first dissolve from the underwater wreckage to the great ship’s white-linen and polished brass finery remains a remarkable and potent transition. Sequences such as these go a long way toward making up for every single moment Billy Zane is on screen, elevating his terrible plutocratic-bully dialogue to stratospherically lousy heights of excess.

For those who have never seen Titanic, it’s about a Wisconsin lad (DiCaprio), short on funds but long on moxie, who saves the Zane character’s fiancÃƒÂ©e (Winslet) from a suicide attempt and, ultimately, a life of suffocating riches. The poor boy and the rich girl fall in love. They consummate their love in the back seat of an automobile on board the boat. The boat hits the ice. And every time your eyes reset to rolling position, Cameron gives you another majestic panorama of wonder, or mass suffering, or nerve-racking, death-defying triumph amid desolation.

For me, the reason Titanic works has everything to do with the scene in which Winslet’s Rose, floating among the corpses and the remains of the ship’s furnishings, finally gets breath enough in her lungs to blow that warning whistle to attract the attention of a lifeboat. It’s the hokiest brand of suspense, yet Winslet’s suffering somehow never becomes risible.

The 3-D you can take or leave, frankly. Wearing those glasses cuts out a dubious percentage of the brightness and vibrancy of the picture’s imagery. As Cameron recently said: “Postconversion should be used for one thing and one thing only — which is to take library titles that are favorites that are proven and convert them into 3-D — whether it’s Jaws or E.T. or Indiana Jones, Close Encounters … or Titanic. Unless you have a time machine to go back and shoot it in 3-D, you have no other choice. The best alternative is if you want to release a movie in 3-D — make it in 3-D.”

That is the best alternative. But I’d be more interested in Cameron inventing that time machine.