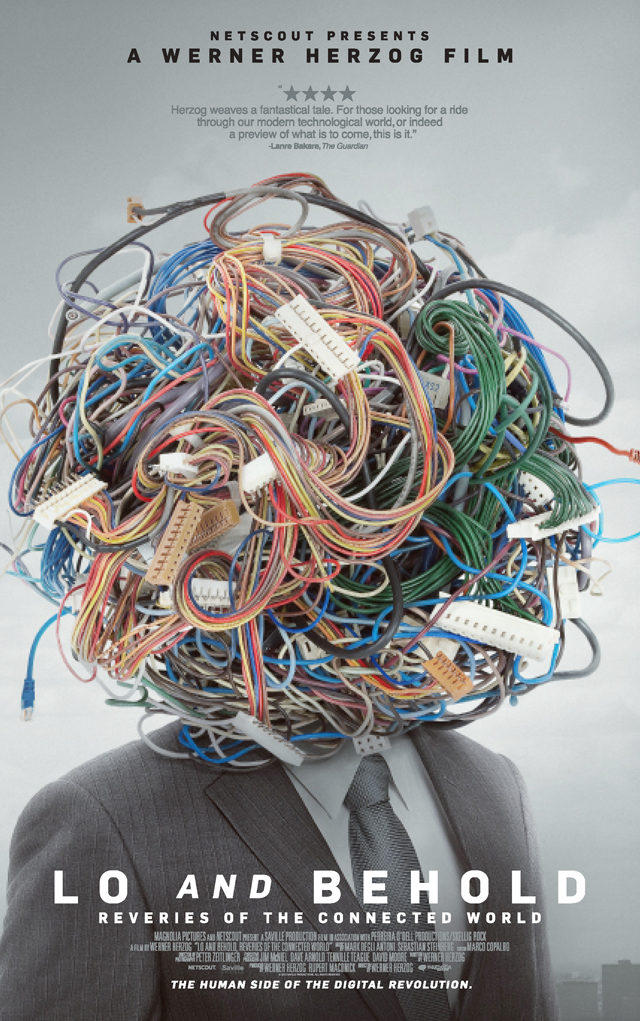 If all had gone according to plan, the internet would have made a rather inauspicious debut, but perhaps it wasn’t meant for modesty. On Oct. 29, 1969, two computers — one at the University of California Los Angeles and the other at Stanford Research Institute — were scheduled to communicate to one another through ARAPANET, a predecessor of the internet. The first word UCLA tried to send was “login” but after only two characters, the transmission was terminated. The result was the actual first word communicated via technology that would eventually lead to the internet: Lo.

There is poetry in that, and it’s not lost on scientist Leonard Kleinrock, who recounts the story in Lo and Behold: Reveries of the Connected World. Nor is it lost on the 74-year old director behind the camera, Werner Herzog. For nearly 50 years, the Bavarian-born Herzog has plundered every possible corner of the globe, captured images from the 32,000-year-old caves of Chauvet and life under the ice shelf of Antarctica. If Herzog can’t go to space — Lord knows he will try — then the deep and expansive world of the internet is where he must go.

Lo and Behold is the result of that exploration. Told in 10 vignettes, Herzog interviews to the pioneers of the internet, the manipulators, the watchmen, the analysts, the everyday users and the victims. In one case, Herzog talks to the Catsouras family who lost their daughter in a violent car crash. Photos from the scene were uploaded to the internet and distributed to anyone seeking morbid titillations. The internet is the manifestation of evil, Mrs. Catsouras surmises.

In another instance, Herzog talks to Elon Musk of Space X about the crucial role  the internet plays in the future of communication and invention. How else will we be able to talk to Mars? Trying to accomplish what Musk imagines without the internet would be akin to robbing a carpenter of their hammer while asking them to build a house.

Both of these conclusions are rather mundane — we’re all pretty much on board with the idea that the internet can be both an awful and outstanding tool — but Herzog doesn’t stop there. He wants to know if the internet dreams of itself. In Herzog’s hands, it just might. It is said that art is a mirror that the artist holds up to society. The caveat is that the artist selects what the mirror reflects. With the internet, the mirror has no frame. It is everything we’ve been, are and want to be.

Maybe that want is to be simultaneously singular and part of a collective, specific and anonymous, detached and engaged. Herzog distills this duality into a single image: Buddhist monks swaddled in bright orange robes quietly strolling along the banks of Lake Michigan, their heads turned not toward the impressive Chicago skyline or heaven, but to the glowing screens of the smartphones in their hands. It is a humorous image, somewhat ironic, but Herzog’s camera lingers so the viewer can behold the dual complexities of the image and the very nature of the internet. There is nothing singular about it.

On the Bill: Lo and Behold: Reveres of the Connected World. October 12–15, The Boedecker Theater at The Dairy Arts Center, 2590 Walnut St., Boulder. thedairy.org