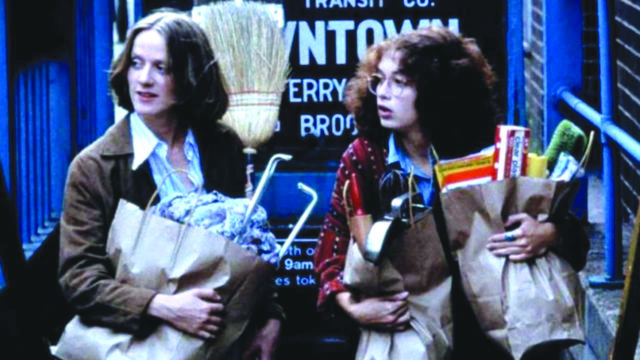 When Girlfriends opened in New York City on Aug. 11, 1978, a newspaper strike kept the movie’s release from a public announcement. So, director Claudia Weill and actors Melanie Mayron and Eli Wallach photocopied handbills and stood on street corners to get butts in the seats. The grassroots campaign worked, but it didn’t hurt that the film played the Cannes Film Festival earlier that summer. It also didn’t hurt that when papers did start reviewing the independently made comedy, the consensus was favorable. Two years later, Stanley Kubrick namedropped Girlfriends when discussing American cinema trends (he was a fan). That same year, Weill released It’s My Turn, her second — and final — feature film to date.

Shot over three years in NYC, Girlfriends is one of the progenitors of the American independent movement. Weill and cinematographer Fred Murphy shot in cramped apartments and reclaimed art galleries on 16 mm. Actors either wore their own clothes or, in the case of Susan (Mayron), cherry-picked from Weill’s closet. Few films look this authentic.

But Girlfriends is more than a time capsule of New York in the ’70s; it’s the timeless tale of a young artist trying to make a name in the city legions have called home.

Photography is Susan’s métier. Arty black and whites are her aspiration, but weddings and bar mitzvahs are paying the bills. She says she dreads them to anyone who asks, but you get the feeling she kind of loves them. She also loves her roommate, Anne (Anita Skinner). The two are so close they’re practically inseparable, but then Anne goes and gets married, leaves the city and has a kid. Susan feels abandoned, yes, but also feels an invisible hand pushing her toward adulthood, which includes fulfilling work and relationships that don’t end with her sneaking out of someone’s apartment at 3 a.m.

That probably sounds familiar from today’s viewpoint. Hell, coming-of-age-in-the-city could be a genre itself. But revisiting Girlfriends in 2020 revives the freshness that enchanted so many before the concept got mimicked and parodied to death. Not to mention the slew of actors, writers and directors who ought to pay respects to Mayron’s frank Susan, screenwriter Vicki Polon’s quick-witted script and Weill’s naturalistic direction.

But the movie industry is not kind to our female pioneers. Though Mayron continues to work, Polon’s cinematic career tapped out after two more scripts (the last one in 1993). Weill’s didn’t last nearly as long: Following the success of Girlfriends, Weill went to Hollywood to direct her sophomore feature, backed by Columbia Pictures and starring top-level actors. But rampant misogyny throughout the production proved that Hollywood was not a place Weill wanted to be. So, she returned to the theater and TV.

Thankfully, Girlfriends remains intact, in circulation and better than ever. The Criterion Collection has released a new 4K restoration, available on Blu-ray and DVD, with a bevy of special features: interviews with Weill, Polon, Mayron and costars, Christopher Guest and Bob Balaban; two shorts from Weill — Joyce at 34 (codirected with Joyce Chopra) and Commuters (codirected with Eliot Noyes); and essays from Molly Haskell and Carol Gilligan.