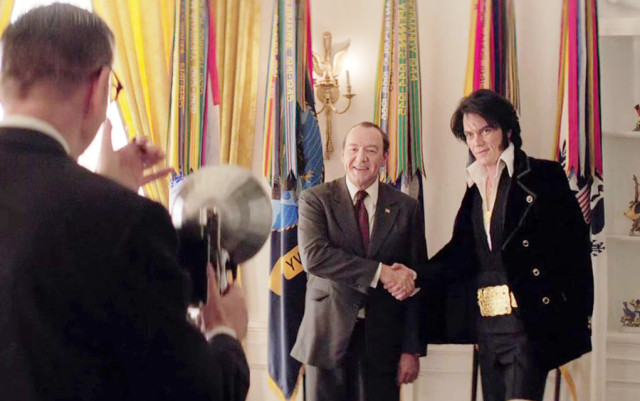 There is an often-repeated anecdote that Charlie Chaplin once entered a Charlie Chaplin look-alike contest and came in second. It’s a popular story, one that illustrates the emptiness behind celebrity and fame, but it is just a story. No hard facts have ever confirmed the tall tale. Yet, the allure of the story is not in its factuality, but in the popular notion of what celebrity requires: not skill, talent or genius, but the correct look with the right costume.

This apocryphal story is echoed nicely in Elvis & Nixon when two Elvis impersonators confront Elvis Presley (Michael Shannon) and his childhood friend, Jerry Schilling (Alex Pettyfer). The impersonators compliment Elvis on his dress, but they critique it simultaneously, claiming to be more accurate representations of the King. Elvis and Schilling casually chuckle at the impersonators who have no idea that they are talking to the real McCoy. Furthermore, this has happened before.

Elvis & Nixon is a silly film; one where the truth is stranger than fiction, but it is how Shannon approaches the character of Elvis — not as a washed-up, drugged-out caricature, but Elvis as an Elvis impersonator — that makes it compelling viewing.

Director Liza Johnson and Shannon work hard to peel away the façade that is Elvis, only to find that too many years have passed — too many albums, too many movies, too many adoring fans. If there is anything left of Elvis Aaron Presley, then it is strictly Elvis’s memory of such a man. In a revealing scene, Elvis shows Schilling his kit of hair spray, hair dye, hemorrhoid cream — for the bags under his eyes — glasses, coats, gold belts, all of it part and parcel of being the King. Without them, he’s just a man. And Elvis is done being just a man.

Now Elvis wants to save America, stop the youth from listening to drug music, squash the Black Panthers and restore order to the Union. How will the King accomplish this? By acquiring a badge. And not just a county deputy badge — which he flashes at every available opportunity — but a real Undercover Agent-At-Large badge from the federal Bureau of Narcotics and Dangerous Drugs. How will he accomplish this? By walking up to the gates of the White House and asking to see President Nixon (Kevin Spacey).

And see Nixon he did. On December 20, 1971, Elvis sauntered into the Oval Office and was appointed an agent by President Richard Nixon.

Lucky for Elvis, Nixon was just as far up his own ass as Elvis was. What other sitting president would appoint an aging rock star and clearly unstable individual as an undercover drug narc? Just the most paranoid president of the 20th century.

Though the performances from Shannon and Spacey are fantastic, Elvis & Nixon routinely strays from the center to explore the lives of the yes-men surrounding the two heavyweights. These moments add little and distract too much from the overall thrust of the movie. Yet, these moments don’t derail the movie, which finds its footing whenever Shannon’s Elvis strides back on screen.

Celebrity may not be honest or authentic, but is sure is captivating.