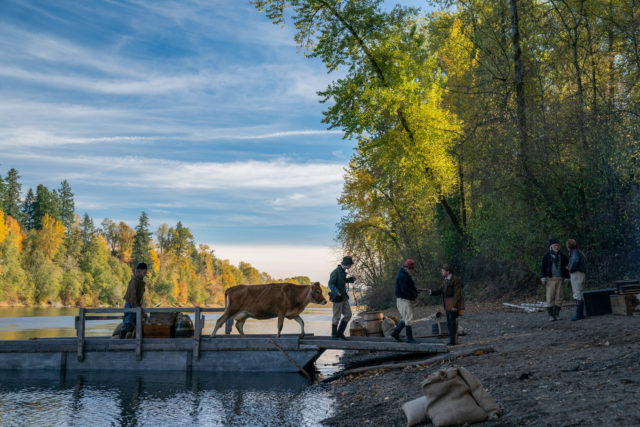 His name is Figowitz, but everyone calls him “Cookie.” It fits him well. Not only is he the cook for this outfit of beaver trappers traipsing through 19th-century Oregon Territory, but “Cookie” also captures his sweet and gentle nature. When Cookie goes looking for food, he comes back mostly with nuts, berries and mushrooms. When he comes across a salamander wrong-side-up, he gently rights the creature, letting him go about his business. And when it comes time to milk a cow, Cookie does so gently, softly talking to her with a casual, conversational tone. When he asks her about her day, you half expect she’s going to answer back.

Her name is Evie, and she’s the first cow to find herself in the Oregon Territory. The prized possession of Chief Factor (Toby Jones), a wealthy landowner in this soggy muck.

How Cookie (John Magaro) got here is anyone’s guess. He once was an indentured servant to a baker in Boston, which is how he learned his skill. That’s not a skill many in these parts have, and King Lu (Orion Lee) quickly finds a way to capitalize. How Lu ended up in these parts is another toss-up. Like the country they call home, origin stories are complicated and often unsavory. What matters most is the present and what you do with it. And what they do is sell: Oily cakes, hot and fresh biscuit/donuts that remind the trappers of grandma’s cooking. When Factor bites into one, he’s transported back to England. One bite is enough to know he’s got something special in his hands.

The same can be said of First Cow, the seventh feature from writer/director Kelly Reichardt, and her fifth collaboration with writer Jonathan Raymond. Working from Raymond’s novel, The Half-Life, Reichardt and Raymond spin something as delicate and delicious as Cookie’s oily cakes. And those oily cakes don’t even show up until 30-plus minutes in. But when they do, you realize the story Reichardt and Raymond are telling.

And it’s a funny one at that: From acquiring raw materials to the market of supply and demand, from the tyranny of growth to the promise of wealth. It’s the rise and fall of American capitalism, all contained in one little oily cake.

Marago and Lee excel in their roles — you believe their friendship from start to finish. Same with this world: Christopher Blauvelt’s camera remains low to the ground, constantly shrouded by foliage and fauna. The square Academy framing further keeps the movie from looking overly cinematic and presents each character as a figure eternally out of place. And they should, none of them belong. Even the Native Americans Factor entertains or keeps as servants are dressed in Western wear.

There’s good fun in First Cow even if, in the end, it’s still tragic. Despite Cookie’s skills and Lu’s business acumen, First Cow is a cutting reminder that though free enterprise appears open to all, only a few get to play the game. No matter how good the indentured servant and the Chinese refugee’s oily cakes are.

ON THE BILL:  First Cow is available On Demand starting July 10.