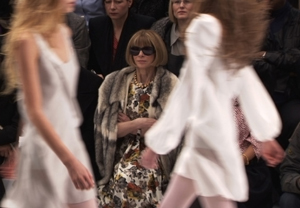 Two years ago may as well be 200 in this economy, a fact that gives the easygoing, entertaining court documentary The September Issue a certain poignancy. It’s about the run-up to a late-boom-era capitalistic war, a triumph of advertising and frippery over rational thinking: the September 2007 issue of Vogue, hundreds of pages long, and fraught with backstage machinations and editorial mishaps.

Anna Wintour is the star of this show, in theory. Meryl Streep, as you may know, played a fictionalized version of Vogue’s high priestess in The Devil Wears Prada. The real-life editor-in-chief behind the sunglasses we meet here and it’s not a very revealing meeting, frankly, more of a terse hello in a waiting room is fearsome, wily, hard as nails and, finally, a little bit depressing. Bits of her life and lifelong class issues (her family thought she was slumming going into fashion) emerge in director R.J. Cutler’s (The War Room) breezy chronicle. But any filmmaker would be a fool to ignore a character as rich as Vogue’s longtime creative director Grace Coddington, Wintour’s contemporary, ally, sort-of friend and eternal adversary. And while Cutler may be awfully easy on his subject, and thoroughly in the bag as far as the fabulous! glamorous! daaaahling! milieu goes, he is no fool. Coddington is the true star of The September Issue.

Anyone who works in or near the media will find a lot to feast on here. Sienna Miller was the cover girl for the featured issue, and it really is amazing how much nonsense and reshooting and retouching and ego-shredding second-guessing goes into a typical Vogue cover, if this one was, in fact, typical. Wintour is not a forthcoming camera subject, and you get the feeling that she’s exceedingly conscious (as are most people in most documentaries) of playing to the camera, either for stereotypical Mean Boss insults (not that I’m doubting she’s actually mean) or for pathos. You don’t know how much to believe The September Issue. But it’s sort of irresistible anyway, and there’s no “sort of ” about Coddington, a valiant editorial warrior with a sense of humor.