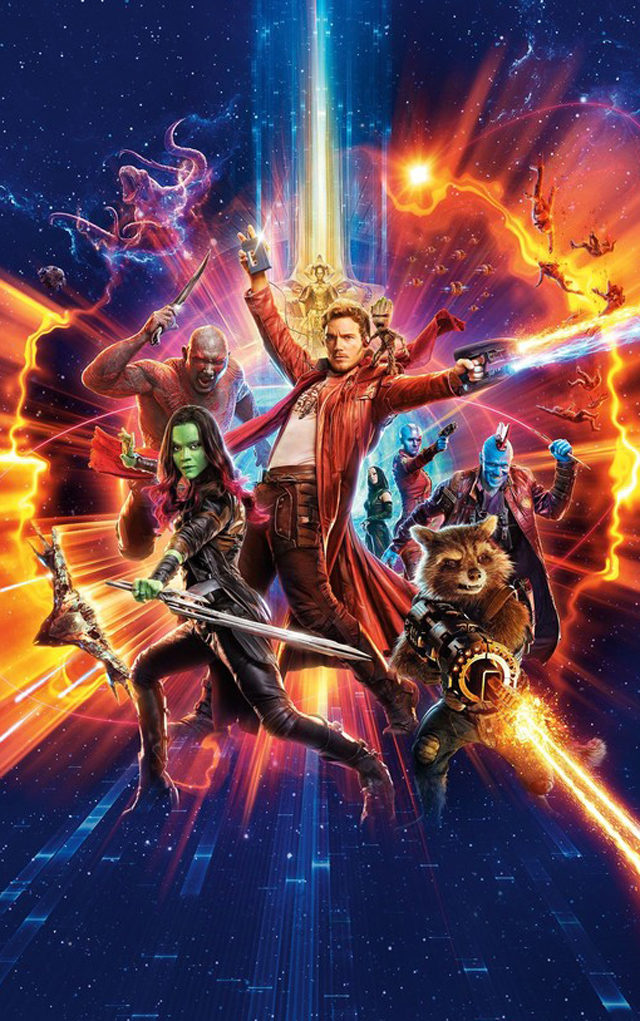 Guardians of the Galaxy Vol. 2 feels like a suitor who discovered that his beloved enjoys chocolate and then filled an Olympic-sized swimming pool with Hershey’s kisses. Writer/director James Gunn identified what worked in his first film — a quirky blend of funky music, ample humor and bonkers sci-fi elements — and then set out to bludgeon his audience to death with the very things they adored, like some kind of Greek tragedy.

You liked dancing baby Groot? Prepare to die via adorbs tree-boogieing! Enjoy Drax’s deadpan comedy? Watch him endearingly call a woman ugly 50 times! Enjoy a well-conceived narrative? Sadly, nobody blew kisses at the plot of the first film, so Vol. 2 forgot to include one.

The first sequence is the best in the whole shebang, as Groot (still Vin Diesel) drops it like it’s autumn while Peter Quill (Chris Pratt), Drax (David Bautista), Rocket (Bradley Cooper) and Gamora (Zoe Saldana) fight a space Cthulhu. Shortly thereafter, Ego (Kurt Russell) shows up, reveals he’s Peter’s long-lost father and whisks most of the gang away to a planet that is a living extension of Ego himself. Meanwhile, Nebula (Karen Gillan) is still trying to kill Gamora, and Yondu (Michael Rooker) is facing a mutiny from his space pirates. Like a Friday at the office, everyone looks very busy but isn’t actually doing much work.

“Character trumps all” sounds like an accurate guiding dictum but is partial malarky. Everything that happens in Vol. 2 feels like B-plots involving well-developed A-holes. OK, mostly well-developed A-holes; Gamora is a world-destroying bad-ass who can use a spaceship’s severed cannons as a shoulder-mounted personal defense weapon, but her arc is largely reduced to “will she/won’t she” rom-com bullshit with Quill. Somewhat delightfully, Rocket and Yondu have the most growth and depth, while newcomer Mantis (Pom Klementieff) draws the short straw as Ego’s emotional fluffer.

Visually, Vol. 2 is something special. Often looking like it was hand-painted by a 1970s sci-fi aficionado on potent peyote, the film is awash in WTF aliens and seizure-inducing lights and colors. If Marvel Studios is being slammed for its uninspired visual sameness across its vast spate of movies, Guardians of the Galaxy remains the asterisked exception. Gunn also walks on the weird side of the now-obligatory cameos and references to other Marvel properties, choosing to dot backgrounds and small scenes with characters whose primary power is compelling audience members to Google “Who was that supposed to be?”

From the “trying too hard” soundtrack to the overlong, sappy conclusion, Vol. 2 is painfully and obviously trying to give everyone what they want, attempting to replicate an experience that can’t be replicated without the element of surprise. Nothing truly fails to work, even if it never quite smoothly functions. The result is in-your-face pleasantness and fun that is substantially better than most sequels but a cut below the benchmark this series unfairly set for itself. If the next installment has one of those “plot” things and a bit more self-restraint, we’ll all be praising how space got its Groot back.