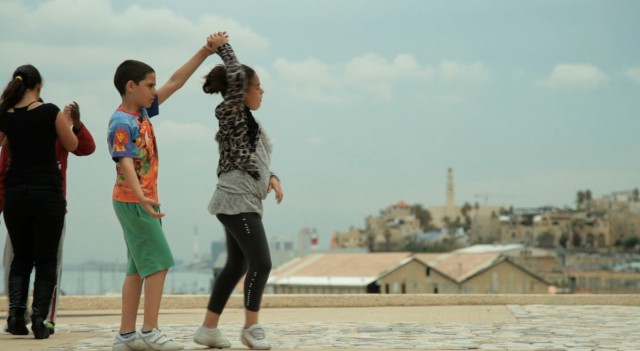 Since 1994, Pierre Dulaine, subject of the 2013 documentary Dancing in Jaffa, has run a program called Dancing Classrooms, which teaches fifth graders the fundamentals of ballroom dance. The program teaches more than just footwork, it teaches the students elegance, manners, good posture and most important, Dulaine feels that Dancing Classrooms teaches children civility. For Dancing in Jaffa, Dulaine invited a camera crew along to test just how effective Dancing Classrooms is at teaching civility by taking the New York City based program to one of the biggest tinderboxes in the world: Dulaine’s hometown of Jaffa, Israel.

Dulaine knows at the outset of the film that teaching dancing in a culture where some men elect not to touch women all together will be difficult, but he is a man on a mission. Dulaine is no stranger to the customs or the Israel- Palestine conflict, and claims to come with no political agenda, just a desire to teach dancing. That opens more doors than you might think and it allows Dulaine to smuggle in lessons of kindness, trust and connection. Dulaine knows that if he can get these kids to look each other in the eye, hold each other’s hand and accomplish something together, then there is hope for the future.

But as with all good stories, it’s not that simple.

The fight between Israel and Palestine has been dragging on since 1948, and does not seem to be letting up anytime soon. The current generation will always influence the following, and you can see it in some of Dulaine’s students.

“My father would kill me if I touched a Jew,” one of the Arab students says.

One scene around a dinner table illustrates that the kids are aware that Muslims and Jews are different, they’re just not sure how.

“Jew, Arab. Arab, Jew. There is no difference!” Pierre admonishes the children who refuse to touch hands.

Not every child cooperates, and Dulaine dismisses them from the program. He has no time to waste on people who don’t want to learn. The director of the documentary, Hilla Medalia, doesn’t shy away from these moments, making sure to keep the cameras close and rolling.

The documentary ends with a competition. Students are selected from each school to dance in front of their parents and teachers. The children are understandably nervous and Dulaine is understandably excited. Trophies are handed out, prizes are awarded to the winning school, but pay attention to the losing schools. They do not throw fits of entitlement. They do not walk off the court with their heads hung in shame. They do not rip off their colored sashes in distress. They dance. Dancing may not solve the problems that the future generations of Israel and Palestine face, but it’s a start.

Dancing in Jaffa will play at The Dairy Center for the Arts from May 14th to the 17th. For those interested in learning more, Kathryn Bernheimer (author of The Fifty Greatest Jewish Movies) will host a talkback after Thursday’s show. Tickets and information can be found at www.thedairy.org.