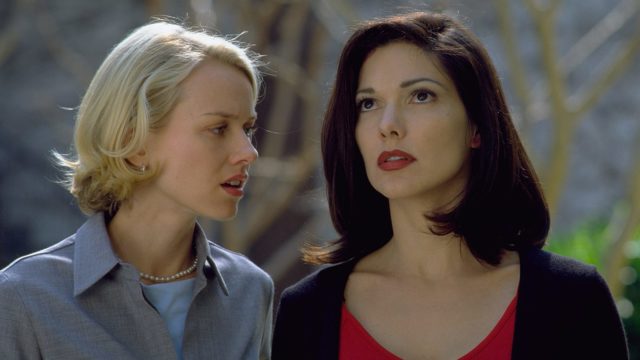 A jitterbug contest. Hot rods drag race on a mountain road. A violent car crash. A woman wanders the Hollywood Hills with a head injury. A man recounts a dream of meeting a monster living behind a diner dumpster. A film director is told, under no uncertain terms, that his leading lady has been chosen for him. A starry-eyed dreamer arrives at LAX. An elderly couple with grotesque smiles smeared across their faces.

Separately they make no sense. Together, even less so—and I haven’t even gotten to the mysterious blue box with the triangle key—but this is Mulholland Drive, David Lynch’s failed TV pilot turned cinematic masterpiece. Logic need not apply.

As the story goes, Lynch wrote Mulholland Drive—named after the street winding through the Santa Monica Mountains—in 1999 for ABC, the station where he and Mark Frost found certain fame with Twin Peaks. But Twin Peaks grabbed viewers’ attention in 1990 when network television was willing to take a few risks. Not so by the end of the decade. The suits running ABC had problems with the character of the film director (Justin Theroux) smoking. Lord knows what notes they had about the incompetent hit man (Mark Pellegrino) who kills three when he means to pop one.

But what Lynch lost in episodic storytelling, Mulholland Drive gained. It’s hard imagining something this sexy, mysterious, weird and silly playing network TV. The nudity would certainly have to go. As would the stunning sequence where Betty (Naomi Watts) and Rita (Laura Elena Harring) visit Club Silencio. And Betty’s audition, where you realize just how good Watts is. That Watts can introduce Betty as an ingénue who practically melts at the sight of a Welcome to Los Angeles banner and close with the image of a deeply disturbed, unhinged and haunted character—and make it all believable—is half the reason to watch the movie in the first place.

Lynch is the other half. There’s something beautifully Brechtian about his movies: He never wants you to forget you are watching an artifice. It’s a technique that can be a little off-putting at first, but once you surrender to the rhythm and slip under its spell, it becomes something you don’t want to live without.

It’s hard to locate Lynch’s high-water mark. He’s been working somewhat infrequently since the ’70s and with many peaks along the way. They weren’t all embraced in their day, but time has been kind to his films, and their idiosyncrasies have only become more potent and enjoyable. These days, at 76, Lynch is enjoying a new level of stardom as a daily online weatherman.

And thanks to Janus Films, several of Lynch’s best are enjoying a renewed appreciation thanks to digital 4K restorations playing art house theaters and making their way to home video. Take a trip back to Mulholland Drive—on the big screen at Denver’s Landmark Esquire Theater at 10 p.m. on Aug. 12 or at home via Criterion’s 4K UHD Blu-ray set.