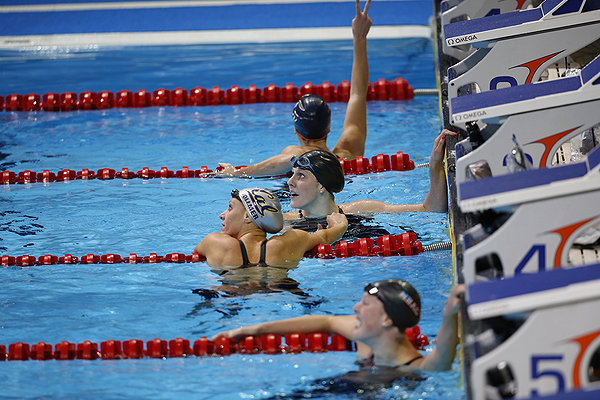 Two years ago, Missy Franklin — a swimmer from Centennial, Colo. – caught the attention of the Olympic world. The freshfaced phenom became the first female to qualify for seven Olympic events and ended up collecting one bronze and four gold medals, and setting two world records. With that level of success, it was apparent that the face of U.S. swimming wasn’t going to solely belong to Michael Phelps.

Which is what makes a documentary about Missy Franklin all the more relevant. Directed by Grant Barbeito (a Denver native) and Christo Brock, Touch the Wall, which premiered at the Starz Film Festival on Nov. 16 and is opening a regular run this weekend at the Sie Film Center, follows Missy Franklin as she trains and prepares for the 2012 London Summer Olympics.

Few have looked as natural or as graceful in a pool as Franklin does. Standing 6’2” with broad shoulders and a long torso, Franklin is a natural, and knows it. No matter how early she has to get up to train, or how hard she has to work, or how cold the ice baths are, Franklin is never without a smile or a laugh. Barbeito and Brock must have known they were getting gold when they started taping the brace-faced fourteen-year-old, because gold is exactly what they got.

They probably did, which is probably why they include Franklin’s training partner and friend, Kara Lynn Joyce. Joyce, a four-time Olympic silver medalist is only a decade older than Franklin, but in the tough competitive world of swimming, Franklin is on her way up while Joyce is already on her way down.

Touch the Wall is an uncomplicated documentary about Missy Franklin’s uncomplicated drive to be the best. Candy-colored graphics don’t do much more than provide statistics and keep an Olympic countdown clock running, but they fit Missy’s personality perfectly. So does the bubblegum-pop music that permeates the soundtrack. As Franklin’s trainer, Todd Schmidt, says, “What are the first three letters in ‘fundamentals?’”

Yet, what is most impressive about Touch the Wall is how incredibly mature and levelheaded its subject is, even at the age of seventeen (Franklin is now nineteen and prepping for the 2016 Olympics in Rio de Janeiro). I doubt that athletes start on the path they take because they want to be role models. In fact, I would suspect many resent the fact that they end up becoming one. It’s not entirely their fault, they were just doing what came naturally to them, someone paid them to do it, and by sheer virtue of being on television and in the papers, they inadvertently became someone children look up to and model themselves after. Many of them do not deserve this honor — hopefully, anyone with a Ray Rice poster has since taken it down. But if there are young girls out there with a Missy Franklin poster over their bed, they are in good hands. I’m sure that there were plenty who dove into the pool after Franklin won those medals, and if the young girls who packed the Buell Theatre on Nov. 16 for the red carpet premiere are any indication, Touch the Wall will inspire many more.