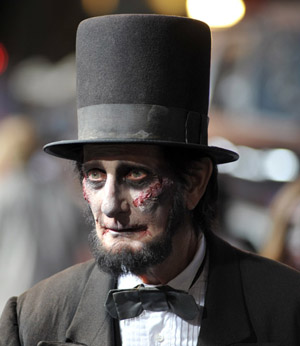 It takes a certain sense of humor to enjoy a horror comedy film like Zombieland, but if you can laugh at graphic violence and can see the humor in parody, then this is a great movie for you to catch. Full of brilliantly funny lines, Zombieland offers a zombie film unlike any other I’ve seen, though perhaps the cult hit Shaun of the Dead comes close.

The film is set in the present, and, as we learn from main character and narrator Columbus ( Jesse Eisenberg), everyone has turned into a flesh-eating zombie due to “patient zero” eating a virus-infected burger. I envision a really, really bad outbreak of E. coli and think those veggie burgers are sounding better all the time.

Columbus, named after the city he’s trying to reach, hopefully to find his parents alive and well, has survived the zombie apocalypse by sticking to a set of survival rules, starting with Rule 1: Cardio. Zombies in this film can run pretty fast, so to survive you need to be in better shape than they are. Unfit humans don’t last long in Zombieland.

Rule 2 is the importance of the “double tap”: that second gunshot that ensures the zombie you’ve just shot, run over or otherwise disabled is really, truly out of action. As he explains in the narrative, “a double tap helps you avoid being a human happy meal.” If that sounds twisted, troubling and shocking, this probably isn’t the film for you.

Columbus meets up with Tallahassee (Woody Harrelson) while walking down a highway strewn with crashed cars, corpses and even a crashed 747, in a scene reminiscent of the dopey Knowing. Tallahassee steps out of his car to the sound of a screeching eagle, and they face off, shotgun to shotgun. Columbus finally decides that the benefits of finding another non-zombie human far outweigh the danger of the situation. For his own part, Tallahassee is a great, larger-than-life character who really makes the movie sparkle. Harrelson is clearly relishing this role, too, one that’s simultaneously an homage to his earlier roles (like in Natural Born Killers) and includes elements of his personal life interests.

Columbus has more rules that he relates, including Rule 3: Beware of Bathrooms, and Rule 4: Wear your seatbelt. Columbus definitely has hang-ups of his own, however, including a frequent need to stop at restrooms, a yearning to meet a girl he can “take home to meet Mom and Dad,” and a deathly fear of clowns.

The non-zombie group is filled out when the two men meet up with Wichita (Emma Stone) and Little Rock (Abigail Breslin), sisters who have somehow survived the apocalypse and follow one rule: “come what may, we stick together.” If this means that they have to trick Tallahassee and Columbus, then so be it.

Tallahassee is on a quest of his own: for the last Twinkies in the world. Completely random, but quite funny because it contrasts so wonderfully with the tough, testosterone-riddled character who finds it entertaining to blow away zombies. On the way to Pacific Playland (the supposed zombie-free refuge that’s their destination in the film), they arrive in Hollywood and decide to crash a celebrity’s house for a few days. They grab a Map of the Stars’ Homes, and Tallahassee decides they should head to the “top of the A-list,” arriving at Bill Murray’s house. Playing himself, Murray is wry and amusing, and the homage to Ghostbusters is quite funny. When they realize that Murray doesn’t have any Twinkies in his house, Wichita says, “I told you we should have gone to Russell Crowe’s house!” At one point in the film, they’re all talking about what they most like about the zombie apocalypse and Columbus says, “The best thing about z-land? No Facebook updates.” There are lots more pop culture references in the film, including sideways compliments about Titanic and Anaconda and a tiny cameo for the upcoming film 2012, something I particularly enjoyed.

In fact, I enjoyed the heck out of Zombieland. When I went into the theater I was expecting a dumb gore film attempting to be funny, but really I laughed more than I have for a long time, and just found it terrific fun. If you like offbeat humor and you can enjoy satirical comedy, then I think you’ll really like Zombieland. Go see it. Sprint, don’t walk.