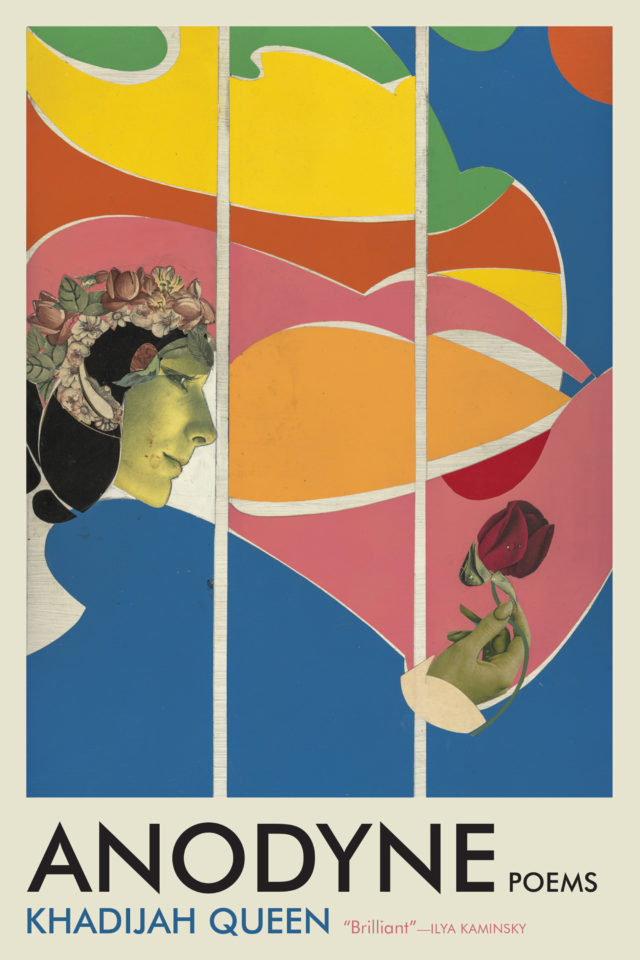 There’s a sense of foreboding that hovers over the pages of Khadijah Queen’s new collection of poetry — a heavy nimbostratus cloud of dread.

“In the event of an apocalypse, be ready to die,” she warns right out of the gate. “But do also remember galleries, gardens, herbaria. Repositories of beauty now / ruin to find exquisite.”

The collection is called Anodyne, and one might wonder whether Queen intends to soothe, because it’s clear being innocuous isn’t her goal.

“I was just fascinated by the multiple meanings of the word,” Queen, a professor of creative writing at the University of Colorado Boulder, says of the title. “[I read a quote that said] we should strive to be anodized in art interactions — inoffensive. I started to think about objectivity and how it is used to harm people; you say you’re objective so you don’t have to do anything. I find it absurd that objectivity has this deeply embedded practice in academia in particular, and in debate of ideas, as if passion had no place.”

She was also taken by the word’s medical definition: to alleviate pain.

“But maybe it’s not alleviating the condition,” Queen says. “It seemed to me that … surviving difficulties is the treatment, that process might be the soothing thing.”

That’s what Anodyne is: a process, a treatment that is soothing because of its refusal to anesthetize you. Like a good doctor, Queen treats pain by searching for its source. Like a good therapist, she understands that searching is the salve.

Queen’s sixth book is intoxicating in its intimacy and vibrance, playing back and forth between lyrical prose and more challenging experimentations in form and style. For every demanding piece, Queen provides a more straightforward offering that acts like a cipher disk. You can find yourself flipping backward through the work, stunned by realization, then forward again, fortified by connection.

“Whose mind loses when / the loved decline,” she writes in “Dementia is one way to say fatal brain failure.” “Human by whose degrees / Capability / and refusal twined up in / loose fog, time-shocked. / A body is what without its engine. / How do I let go of my mother before she is gone? Predator grief doesn’t watch, / yellow-eyed, from hidden grasses / like a real apex. We slow-feed that wraith. Viscera.”

“I think in terms of health and disease and disability, there’s this really negative language around it,” Queen says. “When in fact we’re all gonna deal with health issues, so why are we hiding it, trying to suppress talking about it, saying, ‘It’ll be OK,’ or just medicating it? And why is the language around it so ugly? Why do we not have more natural and compassionate ways of talking about the aging process? Why are we not creating more places for care that don’t feel like you’re just dropping your parent off somewhere to die? … I think we’re missing real care. We have surface-level care and underneath that is the violence of pushing people off and hiding them away, whatever their diseases. That’s been our cultural practice in America for hundreds of years.”

When Queen set about curating this new collection, she hadn’t envisioned it being so familial. The lead poem (“In the event of an apocalypse, be ready to die”) — that ominous rain cloud — originally appeared in a Boston Review collection from 2017 called Poems for Political Disaster.

“I was thinking about the world and what was happening, what I was seeing happen after the [2016] election, and feeling this sense of doom and dread,” Queen says. “I felt like we were all gonna die. So to have family be an undertone [of the collection] I think relates to the impulse to want to survive — what we want to survive for, even if our relationships are complicated and difficult. We really actually do want to live and enjoy each other and enjoy the world that we live in. What are we destroying with our lack of awareness?”

If Anodyne opens with a rain cloud of doom, rest assured the storm is needed to water the seeds of hope Queen plants. By the collection’s end, the seedlings emerge, still vulnerable to another deluge.

“If you do it quickly, / Grandma said, you can heal burns without leaving a scar,” Queen writes in “Double Life.” “Smooth your injured skin then peel / & cut a potato in two / & hold each half to the heated flay / until the potato turns black. Repeat / until it looks like nothing ever happened.”

It’s a process, repeated until all you’re left with is the memory of the burn, and the lessons you learned between pain and reparation.

ON THE BILL: ‘Anodyne,’ by Khadijah Queen. Available from Tin House on Aug. 18, tinhouse.com

Looking for something to read? Khadijah Queen has some suggestions.

“A Nail the Evening Hangs On,” by Monica Sok

Sok is a Cambodian American poet and the daughter of former refugees. Her debut novel, “A Nail the Evening Hangs On,” is a reflection on how the trauma of the Khmer Rouge era plays out in Cambodian society and within her own family by knitting together stories from her family with meditations on history, place and identity.

These four psychologists teamed up to write this treatise on the science of human emotions. The authors combine the parlance of cultural perspective (literature, song, poetry, painting, sculpture, dance and philosophy) with the more recent findings of social science, neuroscience and evolutionary biology.

This collection by Colorado College professor Nate Marshall was just published on Aug. 11. In it, Marshall celebrates the black vernacular: its influence on pop culture, its power in storytelling, and its ability to expand possibilities.