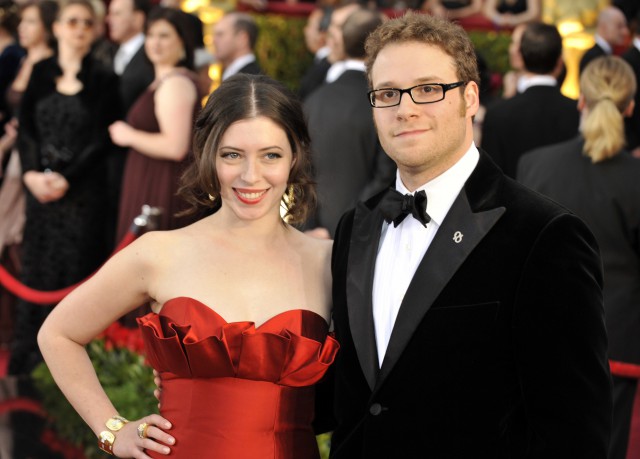 — It’s not easy being a hard-luck hero. Just ask ,
who for the better part of four years has been trying to get “The Green
Hornet” feature film off the ground despite changes to the script, the
tone, the director and, well, pretty much everything except the hero’s
cool customized car.

The comedy-action movie, finally, has a solid
release date set for January and Rogen, who stars in the title role and
co-wrote the script, brought the film to in
on Friday to begin a public campaign to take the film’s street
credibility from zero level to hero level. You’ll have to forgive the
28-year-old
native if he moans about all the other superhero properties that fly
much faster and far straighter on their way to movie theaters.

“I had a meeting with Fox the other day and they
have all of the ‘X-Men: First Class’ stuff up on the wall,” Rogen said
of the Marvel Comics adaptation, which didn’t even have a director
until May but is now being fast-tracked for release next summer. “Look
at the way that movie is happening. It could have the worst script in
the world, the worst director in the world — not that it does, but it
could have those things — and there’s no way the movie isn’t going to
get made. Our movie was not like that.”

Rogen, sitting in a
restaurant, sighed and then jabbed at his side salad with a fork. The
actor, who shed plenty of weight to play the title role in “Hornet,”
seems alternately irked and impressed by his struggle to make “Hornet,”
which Rogen co-wrote with , who was also his scripting partner on the cinematic bong-hits “Superbad” and “The Pineapple Express.”

“It’s been a project of passion, and that’s the only reason we kept it going,” Rogen said.

In the movie, Rogen plays , a rich, shallow party animal who inherits the job of being a newspaper publisher when his father () dies suddenly. He also inherits the services of a mysterious employee named Kato (Taiwanese actor ) whose martial arts and mechanical skills inspire Reid to become a masked vigilante.

, coming off Oscar-winning villainy in “Inglourious Basterds,” is the gangland bad guy, is a grizzled city editor and is ,
an amateur gumshoe trying to puzzle out the story behind the new
mystery man zooming around the city in a weaponized 1966 Imperial
Crown, nicknamed the Black Beauty.

That the film will hit theaters in January is not
exactly a sign of studio confidence — the conventional logic is that
post-holiday weekends are the doldrums for releases; “Paul Blart: Mall Cop” did make box-office noise last year, but it wasn’t a , 3-D special-effects film.

Even slimmed-down, Rogen isn’t the dashing,
action-hero type — that’s where much of the film’s comedy comes from —
but Green Hornet has a far different heritage than Batman, Spider-Man,
Wolverine or the comic-book properties that moviegoers have met in
recent years.

Superman introduced the modern concept of the
superhero and the comic book in 1938, but two years earlier, the Hornet
was already wearing his mask and fighting gangland hoods — it’s just
that he was doing it on the radio dial, not the printed page. The
Hornet was created by and George W. Trendle, and the premise was that handsome newspaper publisher prowled the streets at night with Kato, a driver, valet and friend who
was originally portrayed as Japanese, a heritage that was changed by
1940 as the American perception of changed amid the dispatches from occupied .

The Hornet was featured in movie serials in 1940 and
1941 but never really made much impact as a comic-book character. In
the modern consciousness, he is remembered primarily because of a brief
stint on 1960s television and the legacy of one man: . The native who ushered in a new level of martial-arts awareness in America portrayed Kato on the series “The Green Hornet,” which lasted all of 26 episodes.

, at least, remembered the Hornet and tried to revive him repeatedly. In the 1990s, a version with and (no relation to ) never materialized, and in the past decade filmmaker was on-again, off-again with the project. Most interestingly, director was attached to a late 1990s version, so his struggles with the Hornet precede those of Rogen.

Gondry, who grew up in ,
was drawn to the Hornet character first by the aura around Lee and his
life and then, later, he felt the property was one that would allow him
to make a film that was decidedly not art house. “My archetypes of a
great movie are ‘RoboCop’ and ‘Back to the Future,'” Gondry said.
“Those are maybe my two favorites.”

For Rogen, the appeal of a “Hornet” movie was to put
a volatile friendship in the center of an action-comedy that had
superhero layers on top of that.

“The two guys who try to be superheroes, and their
own relationship is really the biggest thing they have to overcome,
that was always the idea,” Rogen said. “People are trying to kill them
and all that, but if they can figure out how to work together, then the
rest is fine.”

, the star and director of “Kung Fu Hustle,” signed on in
to direct the film and to play Kato, but his version of funny didn’t
sync up with Rogen and Goldberg’s. The arrival of Gondry in got the film back on track, and Rogen credited the filmmaker with bringing interesting father-son elements to the story.

“He has a son, and that gave him some insights, and
we really expanded on all of that,” Rogen said. “Also, while keeping in
the tone of this realistic movie, we needed moments that kind of crack
it open and visually explore things that don’t 100 percent fall into
the realistic world. It’s — more than any of our movies — not a strict
comedy. It was hard to get to this point, but now we’re here, and it’s
great.”