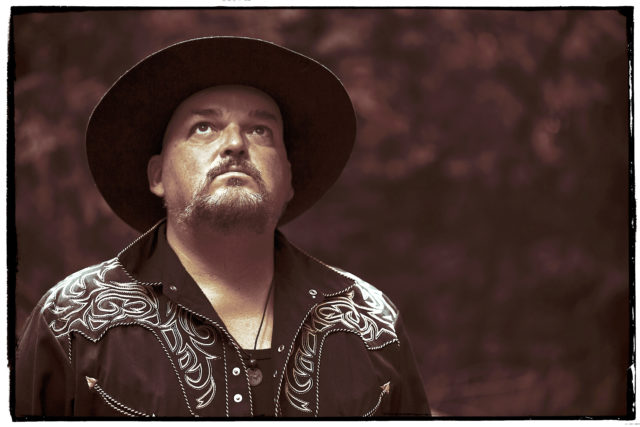 In late January, the dead came to visit Alain Johannes in his dreams.

It certainly wasn’t the first time, but this time the guitarist himself had escaped death — or maybe the two just exchanged glances in passing. Either way, the fear was real; death had made its presence known.

At the turn of the new year, Johannes spent two months battling pneumonia and acute bronchitis, struggling to breathe and praying to wake up in the morning. He had a record to write, and so much more to do, for himself and for Natasha.

She was one of the people in his dream: Natasha Schneider, his late wife, a virtuosic musician, a keyboardist by training, who escaped the Soviet Union in the late ’70s.

The other was his friend Chris Cornell, the Gen Xer whose voice carried a generation on after Kurt Cobain couldn’t anymore.

His wife and his friend serenaded Johannes from a distance on a beach, like mermaids, “lamenting and suffering, but also beckoning you and beautiful,” he says.

When he awoke, he wrote the lyrics to the first track on his forthcoming album, Hum.

The process of writing the record went on in this meditative way, with one track setting up the path to the next, day after day until the record was recorded and written 12 days later.

“Each song came from listening in the silence of the songs before it,” Johannes says from temporary digs in Santiago, Chile, where he was born, but certainly not where he was raised.

His mother, Rommi Wells, toured Europe in a ’60s pop trio with her brothers, one of whom was Peter Rock, who helped shepherd rock ‘n’ roll into Chile during the ’50s and ’60s. Johannes and his siblings lived in eight countries during their childhood. He speaks three languages (four if you count some conversational German) as a result and plays dozens of instruments.

He didn’t know his father, also a famous Chilean singer, until Johannes was nearly 50.

The dead visit Johannes often. Waking or asleep, he feels their presence.

I wonder if he believes in an afterlife.

“I do in the sense that I don’t need to know what it is, and I don’t even need to be certain,” he says. “[The concept of an afterlife] is an extension of this view I have of existence as being magical. I’ve experienced it from the creative acts where synchronicities are happening, connections with people are happening, special moments where an owl shows up and looks down at me from the top of the roof and starts to talk to me in its way.”

Johannes’ existence is magical in the extraordinary sense. By the time he was a teenager his family had set up shop in Hollywood. Johannes went to Fairfax High School, where he formed a band called What is This with Jack Irons, Hillel Slovak and Michael Balzary, who today goes by the name Flea. His three bandmates, along with their friend Anthony Keidis, would go on to form the Red Hot Chili Peppers. (Slovak is also in the afterlife, overdosing on heroin at the age of 26 in 1988.)

But it was Schneider who brought the most magic to Johannes’ life, and believe it or not, she came to him first in a dream when he was 22.

“In my dream it’s dark,” Johannes says. “I can’t really see, but I’m on a teeter totter and I’m bouncing up and down in a field and there’s this female presence on the other side. I can’t see her face so I said, ‘What’s your name?’ And she said, ‘My name is Natasha and we’re going to meet.’”

The next day a friend brought Schneider to Johannes’ home (at the time in Mexico City). She was looking for the right collaborator to cut a record with. Johannes moved in with Schneider two weeks after they met, in 1985 (much to the consternation of his mother). It was the beginning of nearly a quarter of a century of music and travel and otherworldly connection. Theirs was a love that friends speak of with reverence.

Matt Cameron, drummer for Soundgarden, called Johannes and Schneider’s musical relationship “telepathic” in a 2018 documentary about Johannes called Unfinished Plan. “It was fascinating to watch those two work.”

The pair went on to form the art-rock group Eleven with Jack Irons, turning out lyrically introspective songs that took baroque, prog-rock-esque turns. America, steeped in the sludge of grunge, wasn’t quite ready for what Eleven was offering in the early ’90s, and they only breached the charts with one song, “Reach Out,” from their eponymous debut album. But Eleven’s influence was all over the charts: in the Chili Peppers, Soundgarden and Pearl Jam.

When Soundgarden disbanded in ’97, Cornell turned to Johannes and Schneider to help write, record and engineer his debut solo album, Euphoria Morning. When Josh Homme needed some help with Queens of the Stone Age records, he sought out Johannes and Schneider. The pair toured with QotSA in ’05 and ’06 behind the Lullabies to Paralyze album.

Then suddenly Schneider was sick. There were 11 months between her cancer diagnosis and her death in July 2008. More than 20 years of collaboration came to a halt, and the alternative music world mourned. Cornell often dedicated a song from Euphoria Morning to Natasha during live shows. During an interview for Unfinished Plan, Homme has to walk off camera to collect himself when asked about her.

Johannes still processes her death on a daily basis.

“I think some people think, oh man, this guy doesn’t stop grieving,” Johannes says. “I just don’t want people to forget, especially because they don’t get to know her like I do. Even in the music, it’s not the whole picture, the whole story is not there. I want people to realize she wasn’t just a good keyboardist or cool. She was, to me, by far the most talented person I’ve ever met or worked with — that’s just the way it is. And so I keep reminding people. Even in the lyrics for the very last song on the [upcoming] record, I tried to be a little bit more direct about what she means to me.”

Hum, Johannes’ third solo record, isn’t a tribute to his lost friends (though there are elements of that) but a snapshot of his mind as he processed his own brush with death. You can almost feel Johannes getting stronger — healing from his prolonged illness — as the record progresses through the 10 tracks.

He leans into the trance-like characteristic of Indian classical music, deepening the meditative quality of the record, inviting the listener to lose themselves momentarily in mystical sounds. For Johannes, it’s a recommitment to the love that will stay with him, that will not die, until he himself finally greets death face to face.

What this musicians’ musician is listening to.

“I listened to it for like a week straight. You don’t understand — I didn’t stop listening to it. Like when I would go walk around I would listen to the record. I think it’s one of the most powerful and important records I’ve ever heard. She’s touching on something … a mode of expression, going through the deepest honesty, and with a sense of humor about it. And there is a wisdom about her now. I can’t even intellectualize it because it’s such a visceral experience from listening to it. It also makes me feel really, really happy and free, and it makes me giggle because it’s so daring. It deserves all the kudos it’s getting.”

Mehldau recorded four preludes and one fugue from J.S. Bach’s Well-Tempered Clavier, each followed by a piece written by Mehldau and inspired by its Bach companion.

“That one has been my go-to at night because I leave music on while I sleep. It’s mellow. Some Bach is kind of jumpy and will wake you up in the middle of the night. That’s why I never fall asleep to classical radio because it starts playing German opera around two in the morning and you’re like, ‘Oh no, I woke up.’”

The American composer was instrumental in the development of minimal music. His Music for 18 Musicians marked a breakthrough in minimalism. David Bowie cited it as one of his favorite albums.

“Every once in a while, to get the energy up, I’ll put on a bit of a Fearless Flyers or Vulfpeck or Nat Smith. You know, the very accomplished funky stuff.”

On the Bill: Hum by Alain Johannes will be available on July 31 from Ipecac Records, alainjohannes.com

A forgotten chapter of the Impressionist story