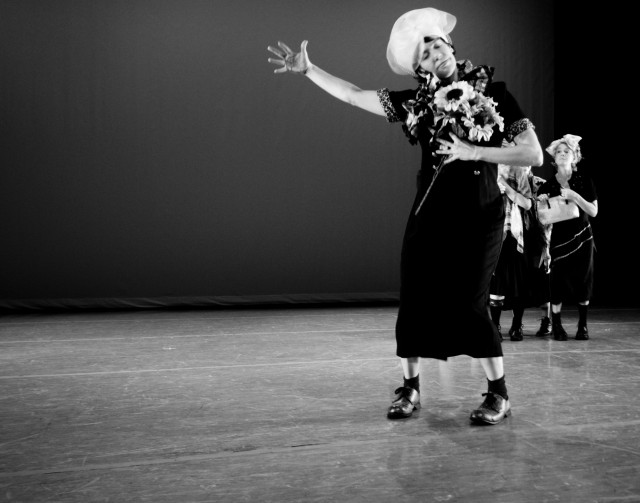 To say that Nancy Cranbourne is excited about her dance company would be a bit of an understatement.

Everything comes out of this place of inspiration and love and I’m just blessed with that. I so admire them; they are my heroes.”

She is speaking candidly about the dance troupe she founded in 2003, 40 Women Over 40. Her goal was simple: defy the normative statement that dance is only for the young and professional. Six years later, roughly 60 women auditioned for Cranbourne’s latest piece, “Feels Like Falling.”

“I ended up taking 50 [dancers],” Cranbourne says. “It is becoming very cohesive this year.”

“Feels Like Falling” is part dance, part theater. The theme of this show originated from Cranbourne’s own personal loss experience.

“The piece, the show is all about healing,” she says. “It was born out of my mother dying two and a half years ago.”

And though that specific death might have been the initial foundation for “Feels Like Falling,” Cranbourne quickly realized that the need to heal is far more universal. The group itself suffered its own loss this year when one of its members passed away. However, “Feels Like Falling” should not be categorized as a melodramatic pity party. Rather, it should be examined as an exploration of the ebb and flow of life as experienced through wise, feminine eyes.

“In this realm that we’re in — we’re women over 40 — everyone has experienced great loss and great joy and everything in between,” explains Cranbourne. “Everyone has lost someone or something very important to them at that point. So when we come together … there is so much communion in what we do and so much encouragement and understanding and compassion.”

And it is within this communion that she feels her dancers find their own “medicine.” With only 10 to 15 professional dancers in the company, 40 Women Over 40 embraces the amateur that brings heart and dedication. One of the unique challenges Cranbourne expresses for women in her age group/category is a feeling of loneliness and longing to be a part of something. The troupe makes room for this by offering fellowship and camaraderie through movement, expression and theater.

And who are these 50 women who come to rehearsal, trainings and performances?

These vocational
and lifestyle time commitments are yet another challenge of the mature
dancer. But busy schedules do not affect commitment. In fact, it is
through these realities that the group continues to defy the standard
conventions of an aging woman and dancer. But it is not the dancing
alone that accentuates the strength and beauty of these women.

Cranbourne
made a conscious decision to use several theatrical techniques when
producing “Falling.” Cranbourne projects video of herself acting the
advice of various healers whose advice she sought after the death of
her mother. From counseling to acupuncture to Rolfing, Cranbourne
includes everything traditional and then some.

Cranbourne’s
stage direction is noteworthy, too. Images of dancers on a dark stage
silhouetted by spotlights conjure feelings of desperate loneliness in
one moment, while in the next, a joyful beat and bright lighting arrays
burst onto the performers as they move in sequenced salutation. In her
use of light and darkness, Cranbourne sets a mood for both her dancers
and audience. In fact, Cranbourne says that the women in 40 Women do
much more than perform, they give. When these 40 women take to the
stage, they are sending a powerful message to viewers of all ages that
it is never too late to grow and challenge oneself, try something new
and create something spectacular along the way.

“We’re
a generous company. We want to give the audience something,” she says.
“It’s not about ‘we’re beautiful creatures and watch us’ — it’s
inclusive.”

Cranbourne
has also been pleasantly surprised by the age and gender of her
audience. From husbands and families of the performers to young men and
women, 40 Women has a stage presence that has a wide appeal.

Visions
of beautiful women in black and white dresses and skirts, dancing
provocatively and without fear to pulsating drums and bass, is just
part of what 40 Women bring to the stage.

“They really don’t apologize for anything,” Cranbourne says of the group.

“We
do what we do and in doing that, just by presenting ourselves the way
we do, we defy that notion [of beauty and age]. Our culture has such a
limited idea of physical beauty and ferociousness and what is athletic.”

It’s
a testament that speaks to one of the most obvious challenges for this
demographic: how to convey their beauty and sensuality. Cranbourne is
very aware of the stigmas and is determined to blaze a new path for her
dancers. For example, she chooses music that you might find on a pop
radio station (Pink, Prince and Justin Timberlake are all represented
in her pieces), and choreographs accordingly.

Cranbourne
says her creation process revolves significantly around the music:
“I’ll be in the car, look around, call the station … it has to feel
like something to me. It’s not the brain, it’s literally the heart, the
pulse of the soul, that I go ‘that’s it.’” And what is “it”? “It” is
fun, organic and, most importantly, honest. “It” might be boiled down
to a conversation the company is having with the audience and within
themselves. This honesty could very well be a product of time and
lessons learned. And the effect is intense and evident.

“People
laugh and they cry,” notes Cranbourne. “People come to rehearsal and
they cry to see 35 women on stage dancing together, having such a
blast. Because they are really doing for themselves at this point,
they’re not proving anything.”