There’s a special place in hell reserved for musicals with long titles. Hardly do they roll off the tongue, but instead tumble awkwardly out of your mouth: You’re a Good Man, Charlie Brown; A Funny Thing Happened on the Way to the Forum; How to Succeed in Business Without Really Trying; I Love You, You’re Perfect, Now Change. It’s exhausting even getting through the name.

And along comes a new member of the club: A Gentleman’s Guide to Love & Murder. But while its title is laborious, the show is anything but.

Winner of four Tonys, including best musical of 2014, A Gentleman’s Guide to Love & Murder is a jaunty tale that reminds us how pleasant theater can be. Now playing at the Buell Theatre through Feb. 28, the musical follows Montague “Monty” Navarro. Monty finds out he’s a member of the prestigious, and rich, D’Ysquith family and is ninth in line to inherit the earldom of Highhurst. Monty knows what he has to do, and in a series of Clue-style deaths, Monty takes down his family without even flinching.

Set in the early 1900s, the musical takes a notoriously heavy time period and makes it a silly backdrop for its shenanigans, filled with sharp, quick wit that’s always playful and lighthearted. Based on the 1907 novel Israel Rank: The Autobiography of a Criminal, Gentleman’s Guide is an original creation that’s refreshingly void of any franchise grip. It’s what you’d describe as a good ol’ fashioned musical, not necessarily political, controversial or experimental, but instead filled with toe-tapping tunes, amusing gags, a well-designed set and a talented cast.

The musical greatly benefited from its structure. If you stop by the Gentleman’s Guide Wikipedia page, you’ll see just how much plot they fit in two hours and 20 minutes by reading a detailed synopsis of the show (2,400 words long, three times the length of this review and longer than the Les Miserables Wikipedia synopsis). But this is where Gentleman’s Guide succeeds: efficient storytelling. It’s a fast-paced — but not sprinting — show that is easy to follow and keeps you on your toes.

The bulk of the musical happens in the first act, which was an applauded choice. It allowed room for the second act to breathe and take its time, making it even funnier than the first act — a tough task to accomplish.

The musical was supplied with a brilliant cast. Touring companies are usually top-notch substitutes for the Great White Way, but this touring cast was superb. Talent overflowed off the stage and every note was exceptional. There were no duds in sight, and every actor infused his or her character with charm and personality.

Kevin Massey, who played our fateful hero Morty, packed an expert punch. He plays a truly rotten character who lies, cheats and murders, but does it with such boyish charisma that you can’t help but love him. In a musical filled with extravagantly odd characters, Massey’s straight man didn’t get overshadowed but instead was every bit as fun to watch as everyone else. His two leading ladies, Kristen Beth Williams (Sibella) and Adrienne Eller (Phoebe), had impressive pipes and were also equally entertaining.

And of course, it’s impossible to not give John Rapson a well-deserved shout-out for playing the entire D’Ysquith clan — nine characters in all. Rapson was consistently hilarious, and it’s a stunning feat to watch him exit stage as one character, usually after being violently murdered, only to return a few seconds later as someone completely different. A highlight was the loud-mouthed, last-in-succession Lord Adalbert, who was brilliantly matched with Lady Eugenia (played by Kristen Mengelkoch) as the squabbling old couple that despise each other the way only husband and wife can.

The show was rounded out with a playground-like set that was constantly changing and moving and filled with lush backdrops. And it’s no surprise Linda Cho took home the Tony for best costume design as Gentleman’s Guide features a never-ending parade of beautiful attire.

The only downfall of the musical is the music itself. The songs are funny and perfectly lovely to listen to during the show, but it’s not a soundtrack that begs you to pour over every song. Songs sort of blended together and nothing pops out. This can be a problem for musicals, but with a strong storyline and interesting characters, it wasn’t a complete detriment. That being said, the show really could benefit from at least one show-stopping song — it had the talent to provide one, but no follow through.

In the end, A Gentleman’s Guide to Love & Murder is a fun nod to the Golden Age of musicals that came before it.

And who could have thought murder could be so delightful? 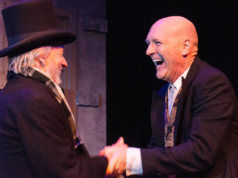 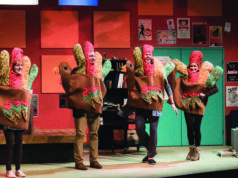 The first rule of entertainment 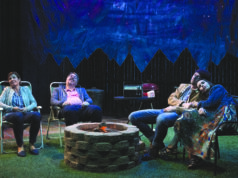 Anomie of the state