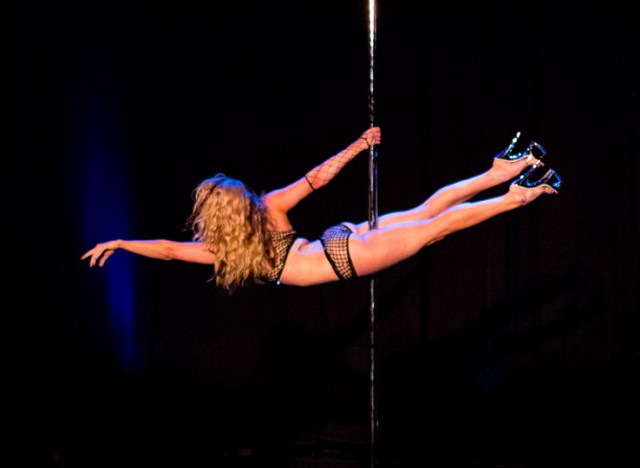 ONCE AN ACTIVITY relegated to nightclubs and strip joints, pole dancing is now on the verge of going mainstream.

“Studios are popping up all over the country,” says Nina Reed, director of the upcoming Colorado Pole Championships.

Reed isn’t exaggerating. Pole dancing became a fitness option about 10 years ago, and its combination of gymnastic-style strength exercises, grace and sheer spectacle made it take off in the fitness world just as fast as crazes like yoga, pilates and CrossFit.

It’s even a nationally recognized sport with Olympic ambitions.

The International Pole Sports Federation, the HQ for pole dancers worldwide, has expressed its belief that their sport should be the next addition to the world’s greatest global sporting event.

On their website, the International Pole Sports Federation posted, “Pole sport athletes across the world are ready to get their sport recognized by the greatest sporting event in the world, the Olympic Games.”

Timothy Trautman of the International Pole Sports Federation supported the statement, while acknowledging the difficulties that the sport faces.

“[Pole athletes] have such grace and elegance and they absolutely belong in the Olympics. But we do fight the stereotype that it’s for strippers,” he said in an interview with BuzzFeed.

And while it’s not quite the Olympics, locals will have a chance to see the staggering grace and athleticism of competitive pole dancing up close this week, when the Boulder Theater hosts the Colorado Pole Championships on Saturday, Sept. 20. The championship will feature performances from regional competitors as well as guest performances from pole champions from around the country.

Phoenix Kazree, who has been dancing professionally for more than 20 years, will be judging and guest-performing at the competition. Kazree is trained in ballet and modern jazz dance, but four years ago she shimmied up a pole for the first time — and has never stopped since.

“I was immediately obsessed,” Kazree tells BW. “Now, it’s my career, it’s something that I love — it’s my sanity. It’s also what I do to keep fit.”

Kazree found the sport in Salt Lake City while working as a dancer in a travelling Broadway show.

“I saw an advertisement in their weekly newspaper for pole dancing fitness,” she says. “That was it, that one class completely changed everything for me. It was different, more athletic than any other type of dance I had done before.”

Due to her background in dance and dedication to her new fixation, Kazree progressed quickly in her new artistry. Spectators can expect to be wowed by the poise, fluidity and power in her guest performance this weekend.

As a judge, she holds competitors to the highest of standards.

“I want to see someone who has a good deal of flexibility, strength, some form of acrobatic movements, big, powerful spins on the static pole, as well as able to be fluid and captivate their audience. There’s a lot to it. Our sport is also an art form — and it is about more than just technical skill.”

Unlike in strip clubs, the goal in competitive pole dancing is not about sex appeal. The performers are judged on technical difficulty, technicality, strength, musicality and stage presence. There is no explicit music allowed for the routines, and there is a dress code. In competitive pole sports, there is to be no nudity or excessive exposure, and any violations lead to point reductions.

“Sometimes, people like to bring the sensual element out in competitions,” says Kazree. “People like to be sexy with their movements, or more sensual, wear the heels, have a sexier costume — but they still pull out the big tricks, strength and flexibility, with clean execution and form.”

According to Melanie Piek, owner of four pole fitness studios across Colorado, pole can be whatever you want it to be. Piek will be competing this weekend in the Masters Division, for competitors over 40.

“[Pole] provides an opportunity to express yourself that is not present in other sports. My favorite part about it is how it makes me feel, and how it makes me feel about other women,” she says. “It has allowed me to develop this great sense of confidence, and the community is so amazing and supportive.”

Piek says pole dancing is for anyone, and she offers classes at Vertical Fusion Studios to men and children as well as women. In response to the scepticism of opening up the traditionally promiscuous sport to children, she says, “It’s very easy to take the sensual part out. In our youth workshops, we teach no sensual movements.”

“People who have pre-conceived notions about pole dancing need to come in and see a show,” says Reed.

Kazree agrees: “I think our sport can become a lot bigger than what it is, and I’m hoping that it does. I think it really just depends on how quickly people want to open up to the idea that it can be more than what we assume based on the stigma of its history.”

Set in a performance theater with lights and sound-boarded music, guests at the Colorado Pole Championships this weekend will get to see how much of an artistic performance professionallevel pole dancing can really be.

“We’ve had people come to the competition that had never seen pole before, and they were very impressed,” says Reed. “I think it’s really cool to blow people’s minds like that.”