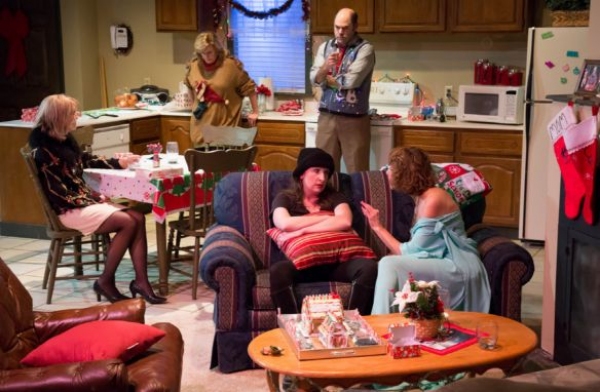 Once in a while you meet someone, and almost instantly you just want to kick their teeth in. Of course, sometimes it goes the other way, too, and you know moments after the first handshake that you’ve made a friend for life.

The Familiars is the first Edge Theatre production I’ve seen. I don’t want to overstate anything, so let’s say that it’s definitely at least like at first sight. This scrappy little theatre company was founded in 2010 by Rick Yaconis and his wife, Patty. It shares space with an art gallery and a police annex in an unassuming building in Lakewood, and judging from The Familiars it has a great deal to offer the Front Range theatre scene.

Evincing a commitment to novel, homegrown theatre, the Edge Theatre Company held a new play festival called On The Edge. One of the entrants, Denver native Ellen K. Graham, was later commissioned to write a play for the company, and the result is the Christmas comedy, The Familiars, a world premiere that presents the Burdocks, an off-kilter, upper-middle class family, as the siblings return to their childhood home on Christmas Eve.

Honora (Carol Bloom), the mother of the brood, plays hostess. She’s one of those June-Cleaver-by-wayof-drill-sergeant women who’s all sweetness and light wrapped around a prickly core of demanding exactitude. For Honora, tradition is everything. The Christmas cookies baked for friends and relatives must go six to a box. The Christmas meal must be a turducken. The dancing Christmas tree that incessantly and unironically plays “Rockin’ Around the Christmas Tree” must sit on the mantel. And for the annual family photo, her adult children must wear the same hideous Christmas sweaters they’ve sported since they were kids.

Kath (Paula Friedlan), the tightly wound middle child, is the first to arrive and is therefore the first conscripted into Honora’s crusade for the perfect Christmas. Though she aspires to calm acceptance, Kath’s mantra-like repetition of a selfhelp slogan belies her agitation. Sometime later, Kath’s older sister, Chris (Patty Ionoff), a flighty, unrepentant lush, breezes in. As Honora notes, Chris is not what one would call “detail-oriented.” Finally, baby brother Dom (Augustus Truhn) arrives, Bluetooth firmly affixed to his ear and wife Fedosia (Suzanne Nepi) equally well-attached to his arm. Dom has recently quit drinking, which makes his regular, furtive marker and glue-sniffing episodes that much funnier.

Though it may, in fact, be the second most unusual thing to have happened at a Burdock family Christmas gathering, Honora excuses herself to take a nap, and when she awakens she is quite literally a changed woman. I won’t spoil the exact nature, duration or effects of this change, but it becomes the focal point of The Familiars and turns what could have been a run of-the-mill Christmas farce into a multi-layered, sometimes nuanced and sporadically hilarious holiday romp.

I say “sometimes” and “sporadically” because as enjoyable as The Familiars is today, it still needs a bit of polishing. You can clearly see the great play peeking out from inside what is currently a good one. Much of the dialogue rings true, but certain exchanges miss their marks. The characters are well drawn, but their backstories and motivations could be more fleshed out. This is most true of Kath, whose personal history and profession, though referenced repeatedly, remain blurry throughout the play.

The character that presents as the most fully formed is Honora, and Bloom more than does her justice with her portrayal. Often, when an actor is asked to play a character in two fundamentally different ways during the course of a performance, one or the other version feels false, or at least forced. Bloom avoids this common pitfall and delivers in spades as both incarnations of Honora. She anchors the show masterfully.

The runner up for my Best Actor award goes to Augustus Truhn, who shows excellent comedic timing but who also excels in the quiet moments of vulnerability afforded to baby brother Dom.

With Christmas standards like Burl Ives’ “Holly Jolly Christmas” de rigueur for productions like this, it would be easy to overlook the subtle sound work in The Familiars. Director Angela Astle and Sound Designer Steven Donaldson fill the pre-show and first act with Christmas classics, so when the second act unfolds mostly music-less, it effectively underscores the change in Honora and the tone of the play overall.

The detail work by Set Designer Tyler Clark deserves credit as well. Be sure to check out the Burdock family Christmas cards on the door leading into the theatre.

The Familiars manages to be both a traditional Christmastime transformation story and a commentary on that very genre, and it’s a play well worth your time on a cold December night.