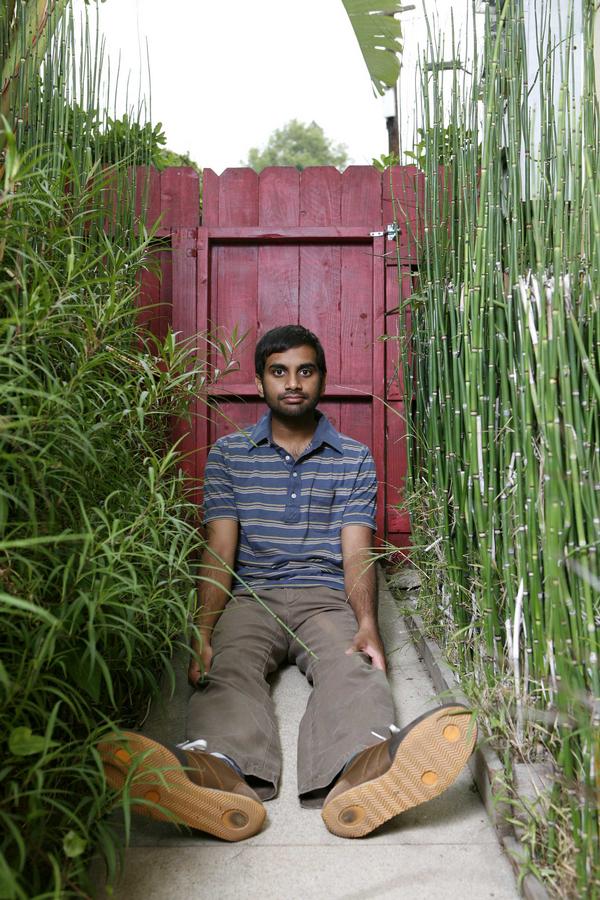 He can’t possibly be bored. Right?

Aziz Ansari has exploded onto the entertainment scene after breaking out as a stand-up comedian in 2005. Best known as fan-favorite Tom Haverford from NBC’s Parks and Recreation, Ansari now finds his resumé lengthening by the week. In 2009 alone, he landed roles in three major motion pictures (I Love You Man, Funny People, Observe and Report) and had a four-episode run on ABC’s Scrubs.

Things had really taken off for the South Carolina native the year before. On the heels of the successful sketch comedy series Human Giant, he was offered the role on Parks and Recreation in the summer, then started his Glow in the Dark comedy tour that fall. (That tour led to his Comedy Central special, “Intimate Moments for a Sensual Evening,” which aired in January.)

Now, he’s making the rounds on late night — Letterman, Kimmel and Conan (before all that shit went down with NBC). His Twitter account (@AzizAnsari) has more than 110,000 followers, and gives an inside look at Ansari’s daily life.

And despite it all, Ansari’s official website’s URL is AzizIsBored.com.

“I’m excited to come back to Comedy Works,” he says. “This set I’m doing is a new hour I’m working on to tour with later this year. It will pretty much all be material that’s not on the special and I may do one or two things if people want to hear them.”

Jokingly, he adds, “I’ve also worked out a deal with Kawasaki and everyone that comes to these shows will get a free dirt bike.”

His act has won a number of awards, including the Jury Award for Best Stand-up at the HBO Comedy Festival in Aspen in 2006.

Ansari’s stand-up career started as a student at New York University. He made the comedian-to-actor transition shortly thereafter, and cut his teeth on Human Giant, a half-hour sketch show that aired on MTV from 2007-08.

“They are two totally different animals,” Ansari says, comparing stand-up to acting. “Human Giant was the show that started my transition into acting and became the calling card that got me all the other acting work I got right after it. So, yes, I’d say it was a catalyst for things in a way.”

But if Human Giant was the catalyst, he says, Scrubs — in which he portrayed the cocky, slacker intern “Ed” — prepared him for his role on Parks and Recreation.

“That was my first acting gig on a network sitcom,” he says. “I just got a feel for doing a network show. Human Giant was a small cable show, a much different animal. [Scrubs] was a great experience, and I was lucky to have it before jumping into Parks.”

Co-created by Greg Daniels and Michael Schur — the geniuses behind The Office — Parks and Recreation, now in its second season, follows a band of local government employees in the fictional town of Pawnee, Ind. Ansari was actually the first member cast by NBC.

“I always had faith in Greg Daniels and Mike Schur because of The Office,” Ansari says.

Its mockumentary style fits The Office mold, but it’s created its own following, of which Ansari’s character is a fan favorite. Last October, Yahoo! TV called him its “MVP” of the fall season.

“The show is very collaborative and I always pitch any ideas I have to Greg and Mike while we shoot,” Ansari says. “I always like to pitch any jokes I have to the writers on set. And we get to improvise a little bit here and there, too.”

Ansari’s roles have a habit of creating massive followings. His sudden departure from Scrubs because of his upcoming commitment to Parks and Recreation caused an uproar, and his role of “Saddamn” in Observe and Report alongside Seth Rogen, while short, was classic Ansari — subtle, yet awesome. (Watch the scene, here.)

But it was his role of Randy, or “Raaaaaaaandy,” a hyper stand-up comedian who rolls around with a DJ, in Funny People that typifies just how much of a breakout star he can become.

Funny People director Judd Apatow liked the character so much that he had Ansari and Human Giant director Jason Woliner create a series of online shorts, which appear on FunnyOrDie.com.

“Raaaaaaaandy” has even spawned a website, LaughYourDickOff.com, which is dedicated to the character.

Thankfully, though, the popularity of his characters has yet to spill over to real life, with insane fans on the streets confusing Ansari for one of his fictional portrayals.

“That’d be crazy,” he says. “Never happened really, but I bet those people are really worried that a robot from the future is busy being the governor of California and not protecting John Connor.”

Ansari’s plate will get even fuller this year. He’s set to appear in Get Him to the Greek, a comedy with Superbad’s Jonah Hill and Rose Byrne of 28 Weeks Later and TV’s Damages.

Projects with Apatow and Woliner are also in the works, as well as more filming for Parks and Recreation.