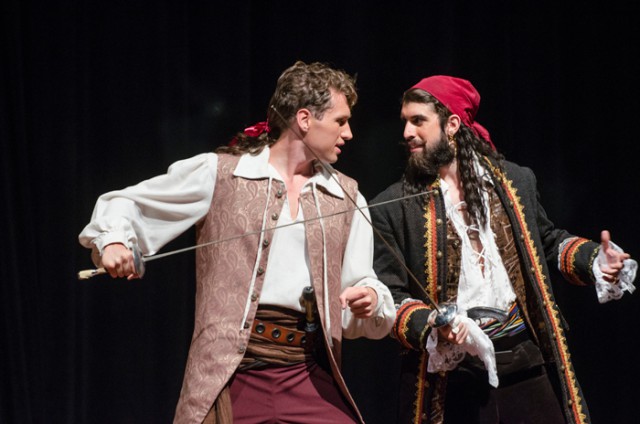 Watch for the Barbie dolls.

They will be part of the fun when the University of Colorado Opera Theater, with two full casts of students and the CU orchestra in the pit, presents Gilbert and Sullivan’s Pirates of Penzance.

Not that the production will be a post-modern reinterpretation of the classic British musical comedy.

“The pirates will be pirates,” stage director and CU director of opera Leigh Holman says. “No Martians. Nothing on the moon. It’s straightforward and very colorful.”

General Stanley, one of the central comic characters, will definitely be a general, although British humor being what it is, he will be, Holman says, “a general with a parasol.”

The pirates will even have a ship. “Pirates of Penzance is not usually done on a ship,” she explains. “But I told the [set] designer [Peter Dean Beck] I want those guys to be on a ship, so we’ve got ropes hanging and they can swing from the ropes.”

Written in Victorian times, Gilbert and Sullivan’s shows kept their massive popularity for decades. Through most of the 20th century, there were Gilbert and Sullivan (G&S) companies, professional and amateur, all across the U.S. But the original humor, based in political and social satire, eventually lost its currency, and today G&S are no longer part of our shared culture.

That’s part of the challenge for Holman and music director Nicholas Carthy.

“Would this style now be relevant to our students was the biggest question we had to answer,” she says. “We thought this is a style that they need to learn. If they’re [going to be] teaching at a high school or a university, they’ll probably create these pieces again. They’re lighter, they’re funny, they require serious singing, audiences love it.”

The satire has often been updated.  “Some of the memorable productions I’ve been involved with had updated political humor,” Holman says. “Gilbert and Sullivan would love it, but right now things are so serious, with ISIS and Ebola, it’s hard to make jokes of it.”

Still, there are ways to direct the humor to presentday audiences. Which is where the Barbie dolls come in.

“There’s a couple of things we’ve updated,” Holman says. “Not anything that we’ve written, just little hidden things that the audience may never see, but it’s fun for us.”

That includes Malibu Ken and Barbie — but you’ll have to watch closely to see them.

Another challenge is presented by performance traditions that have built up over the years and are well known to G&S aficionados.

“We do some of the traditional things,” Holman says. “Most are things that weren’t written by Gilbert but are funny. It’s just silly things — you don’t even know why you’re laughing. For one, the Pirate King says, ‘We’re a rough crew with a rough job,’ and every time he says ‘rough’ the pirates go ‘Ruff! Ruff!’”

Both Holman and Carthy have a lot of experience with G&S. Carthy is British and grew up with their shows. Holman first encountered their shows in high school and has performed them during her career as a singer. It was Pirates of Penzance that provided one of her very first Gilbert and Sullivan experiences. In the 1980s, there was a popular production in New York’s Central Park, presented later on Broadway and as a film starring Kevin Kline and Linda Ronstadt.

“I used to drive around in my little Pinto with my 8-track and sing along with Mabel all the time,” she says.

Holman stresses that the pirates are not at all terrifying. In fact, they are mostly silly and tender-hearted.

“Those poor pirates, if they get wind that anybody they’re trying to capture is an orphan, it breaks their hearts and they just can’t do it,” she says. “So whenever they try to capture somebody, they just tell them they’re an orphan.”

The plot revolves around impossible misunderstandings, secret identities — and the pirates’ sympathy for orphans. Jokes about the British upper crust and bumbling police are thrown in for good measure. Predictably enough, tenor Frederic, the romantic lead, wants to leave the life of a pirate in order to marry the love of his life, soprano Mabel. Equally predictably, the outcome revolves around birthdays, orphans real and pretended, last-minute revelations and forgiveness.

“You have to come with your best sense of humor,” Holman says. “I would say that if you enjoy the humor of Monty Python, you will enjoy Gilbert and Sullivan.”