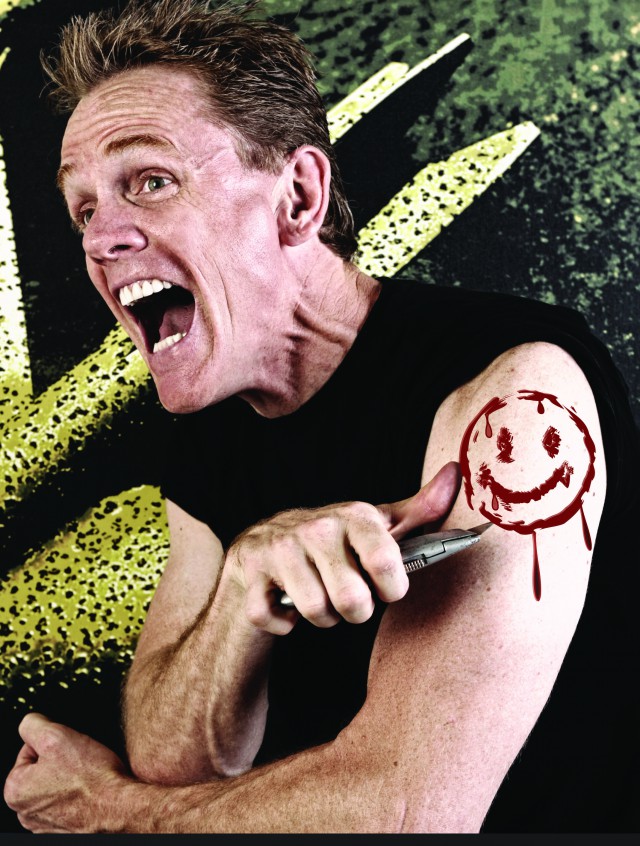 Plenty of comics know that tragedy can make for some great comedy, but few have mastered it the way Christopher Titus has. After all, he’s got plenty of great material to work with: a dead, crazy mom; a dead, alcoholic dad; a dead marriage; and a dead television show, all which have shaped him into one of the darkest comics around.

Titus is perhaps best known for his short-lived television series on Fox that aired from 2000 to 2002. The show, called Titus, was loosely based on the comedian’s mentally and emotionally traumatizing life, and garnered genuine laughs from audience members who were able to watch the show live, in one take.

“We started off filming each scene three times in a row, and finally I said, ‘Well how the fuck does that work?’” Titus says. “As a standup comic, I don’t go on stage and do the same joke three times, so I suggested we film it like a play.”

Despite the show’s short run, it consistently garnered critical praise and was Fox’s fifth-most watched comedy the year it was canceled. Titus attributes the show’s untimely cancellation to disagreements with network executives — who wanted the characters Titus and Erin to break up — and his big mouth.

“I told the network president — and this sentence cost me $30 million — ‘Do you even watch the show?’” he says. “‘The whole premise of the show is two screwed-up people together that make a great couple and can survive anything. If I make them cheat on each other, guess what happens next? The audience hates them, they stop being funny and the show’s over. So we’re not doing it.’”

The following day, the network stopped all promotion of the show, he says.

Now, Titus is focused on his standup comedy as he tours for the next 26 weeks to perform his new act, “Scarred For Life.” Titus says the theme of his new standup is being a loser.

“I’m the worst kind of loser because I actually succeed at things, then I take it one step further to total failure,” he says. “So I talk about all my loser stories.”

One of those stories involves the divorce between Titus and his ex-wife.

“My ex-wife was so crazy and so jealous, that if I said anything negative about her ever, she would flip out and my life was a nightmare,” he says. “If I wrote a scene on Titus where I had to kiss Cynthia Watros, or wrote a scene where I had to hug her, ’cause she’s my ‘girlfriend’ on the show, my whole weekend would be a fucking nightmare. My wife would say to me: ‘You’re just trying to fuck her, aren’t you?’ That was my whole life.”

Titus says he’s happy to be in a new, healthier relationship.

Recently, Titus was the center of some controversy after making a joke about politician Sarah Palin. In June of last year on fellow comic Adam Carolla’s podcast, Titus made the joke that if Palin were elected president, he would “hang out on the grassy knoll all the time, just loaded and ready.”

Soon after, Bill O’Reilly of Fox News called out Titus for what O’Reilly perceived to be a legitimate threat to assassinate Palin.

“Bill O’Reilly said, ‘If he wants to come on this show and explain his actions, then come on,’ Titus says. “So I called my publicist and told him to get me on there. When he called me back, he said that they were past the issue now. Bill O’Reilly is a pussy. He’s a bully pussy. He’s the worst kind of bully, because on top of it he won’t face you.”

Titus ended up giving a half-apology on Facebook, ultimately standing by the joke he made.

“I’m a comedian and it’s a joke,” he says. “So I apologized, but the reason I said this and the reason the audience laughed so hard is because we as Americans recognize that we have let our standards drop so low that we would actually consider Sarah Palin for president. You don’t give the stupid cheerleader the Uzi.”

As he prepares to freshen up on his jokes for his next show, Titus says he’s content with how things have turned out for him.

“I want to make enough money to live, buy a cool car once in a while, and keep going on stage and being funny,” he says. “That’s really all I want to do.”